Speaker positioning can have a significant effect on overall sound quality, and, in the equipment-centric the world of audio, it’s one of the few variables people can tweak and optimize without necessarily having to spend more money. It’s not a surprise thus that positioning is such a highly discussed topic in this field.

What’s interestingly peculiar though is that, for all the exhaustive discussion there is about speaker positioning, there’s not a whole lot of apparent discussion of optimizing subwoofer positioning, particularly when it comes to the height variable. Most subwoofer positioning articles will simply say to just stick it in the corner of the room and maybe move it around a little bit to find a sweet spot, the “subwoofer crawl” as it’s called, and leave it at that. But if optimizing the height of speakers is so important, wouldn’t optimizing the height of subwoofers be as well? That’s what we’re going to explore in this article, as well as cover how to effectively elevate a subwoofer should you decide you want to.

Should a subwoofer be at ear level like many bookshelf speakers are intended to be?

It’s an interesting question and the answer would intuitively seem to be yes. After all, if a subwoofer is just another type of speaker, wouldn’t it follow the same rules of positioning that any speaker would?

There is a logistical limitation of subwoofers that comes much more into play than it does with regular bookshelf speakers: subwoofers necessarily use larger drivers and even the “lower tier” ones can get pretty big and heavy. One of our favorite budget home theater subwoofers for example, the Dayton 1200 (reviewed here) is about a foot and a half long/wide and weighs close to 40 pounds, and it’s not so easy to get something like that elevated to ear level like it would be a smaller ~5 pound bookshelf speaker.

But maybe you’re ambitious (and we’ll talk about how to actually elevate a subwoofer momentarily) and want to give the ear-level subwoofer a solid try – is there actual merit to this seemingly intuitive idea?

Honestly, not really. That we have seen at least.

In fact – and we might rustle some jimmies here – even the various arguments we see for woofers and tweeters needing to be *exactly* at ear level are fairly insubstantial.

Sound is largely omnidirectional, meaning in a theoretically homogenous environment it emanates in all directions equally from the source. The reason that the highs from a tweeter sound more directional and “beamy” is that human hearing is more sensitive to the localization of higher pitch, shorter wave-length sounds. However, when pitches get low enough, to the point where the subwoofer kicks in, humans’ ability to localize sound all but disappears.

Point being: Subwoofer height doesn’t really matter – the odds that a subwoofer will sound noticeably different if it’s moved a few degrees off the ear-level plane is effectively zero.

The next thing to consider is that many home theater subwoofers are actually designed to be placed on the floor, because manufacturers generally understand that it’s not feasible for the average joe to put a 30-50+ pound speaker anywhere else. Many home theater subwoofers have drivers on their bottom and sides that are designed to utilize the nearby floor and walls to help propagate sound in fact, and will actually sound worse or “off” if they’re not placed near either.

Here’s what Floyd Toole, a PhD and VP of acoustical engineering of Harman International, has to say about this:

“…where we place [a subwoofer] does matter. The least effective location is in the middle of a room. It gets better on the floor, still better on the floor against a wall, and best in a corner. This is ‘best’ in the sense of maximizing the quantity of bass radiated into the room.” (source)

What about resonance/vibration through the floor and walls? How can we deal with that?

Resonance is when sound waves cause other surrounding materials, be they other parts of the speaker or not, to vibrate and produce their own sound unintentionally, which can interfere with and worsen overall sound quality. While it’s impossible to completely eliminate resonance, it’s something that speaker designers try to minimize as much as possible, ideally to the point where it’s not perceivable.

Most people also don’t want to be *that* guy in their apartment building, annoying the neighbors that share walls/floors/ceilings with incessant buzzing, not to mention possibly getting in trouble for it.

Fortunately there are a lot of different ways to virtually eliminate or significantly mitigate resonance from subwoofers (which will also often improve their inherent sound), from in fact elevating it with a pad/box/stand, or adding some room treatment, or even just moving it to a better spot in the room.

Subwoofer stands: what are they? should you use one?

Yes, it’s fairly self explanatory from the name – a stand that you place your subwoofer on top of – but there are various styles of subwoofer stands that are designed to primarily deal with different issues, so it’s worth discussing each of them and their relative advantages/disadvantages.

One option is an isolation stand: 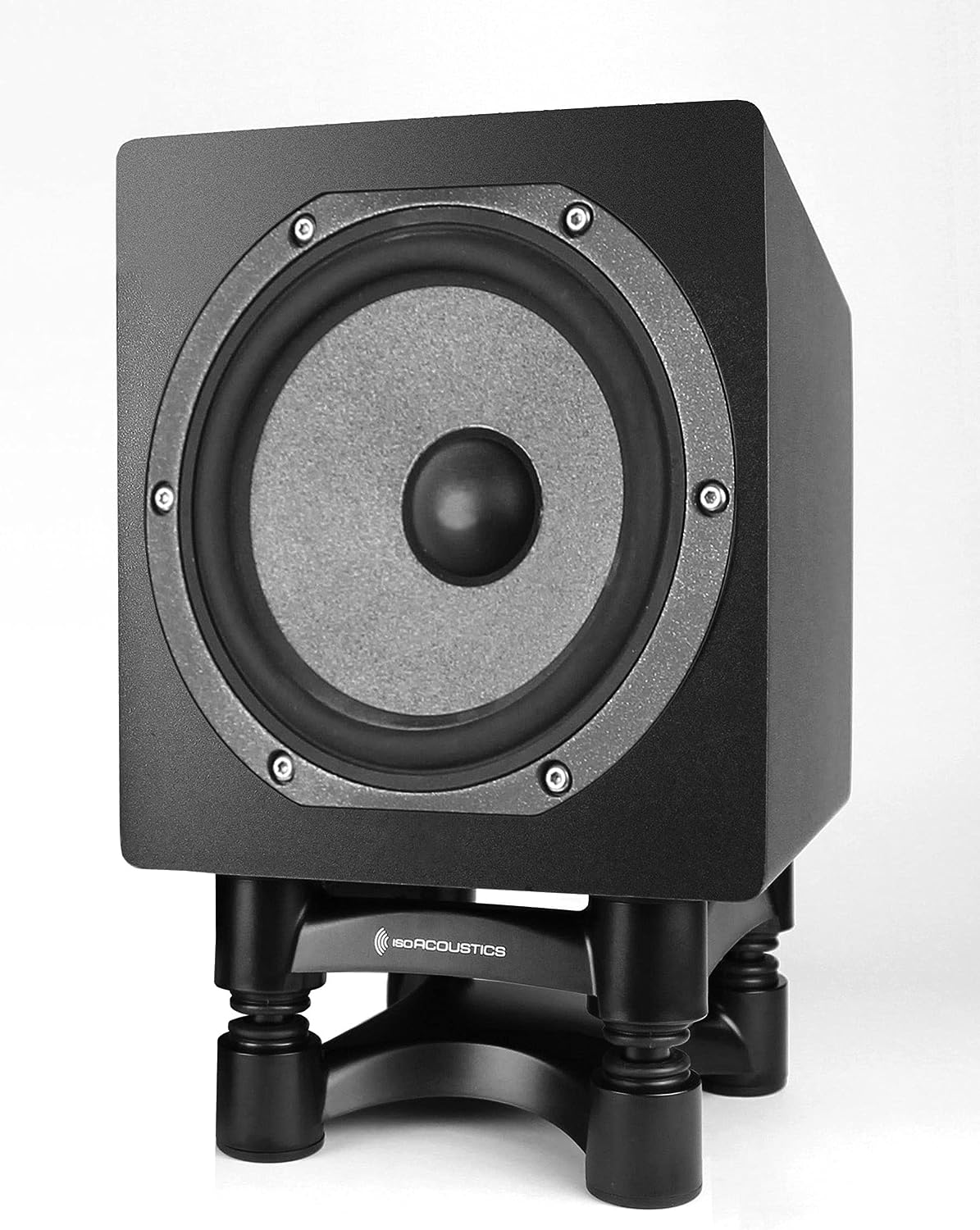 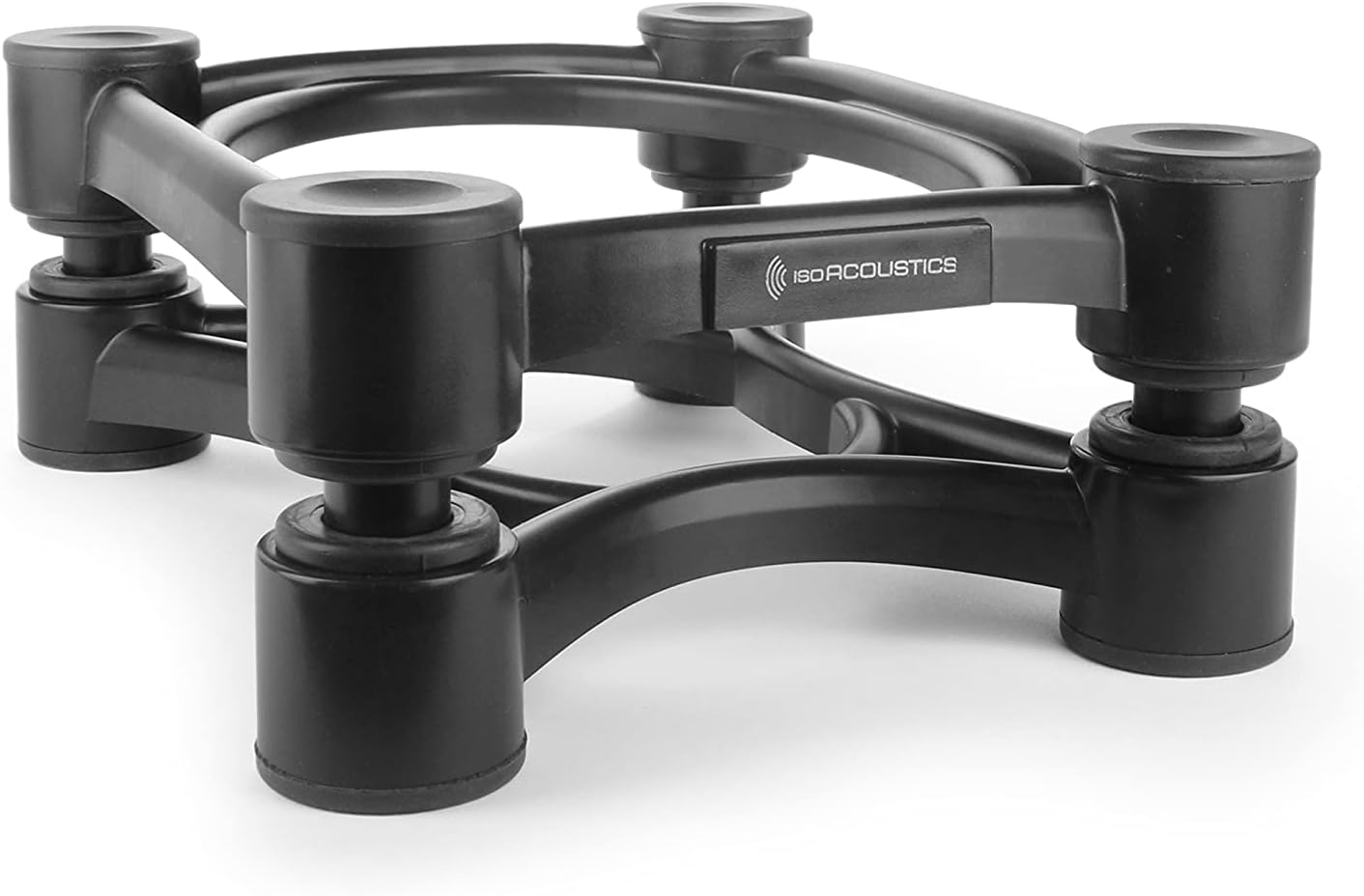 Isolation stands are primarily intended to absorb any physical movement of the speaker, and have some give in the legs, kind of like how an office chair has some give when you sit in it. If you’re in an apartment, for example, and your floor shares a ceiling with someone below, and you need to eliminate any potential resonance through the floor as much as possible, then an isolation stand is a great solution.

There are isolation stands that can also adjust in height and are a great way to get some adjustable elevation under your subwoofer if you want it: 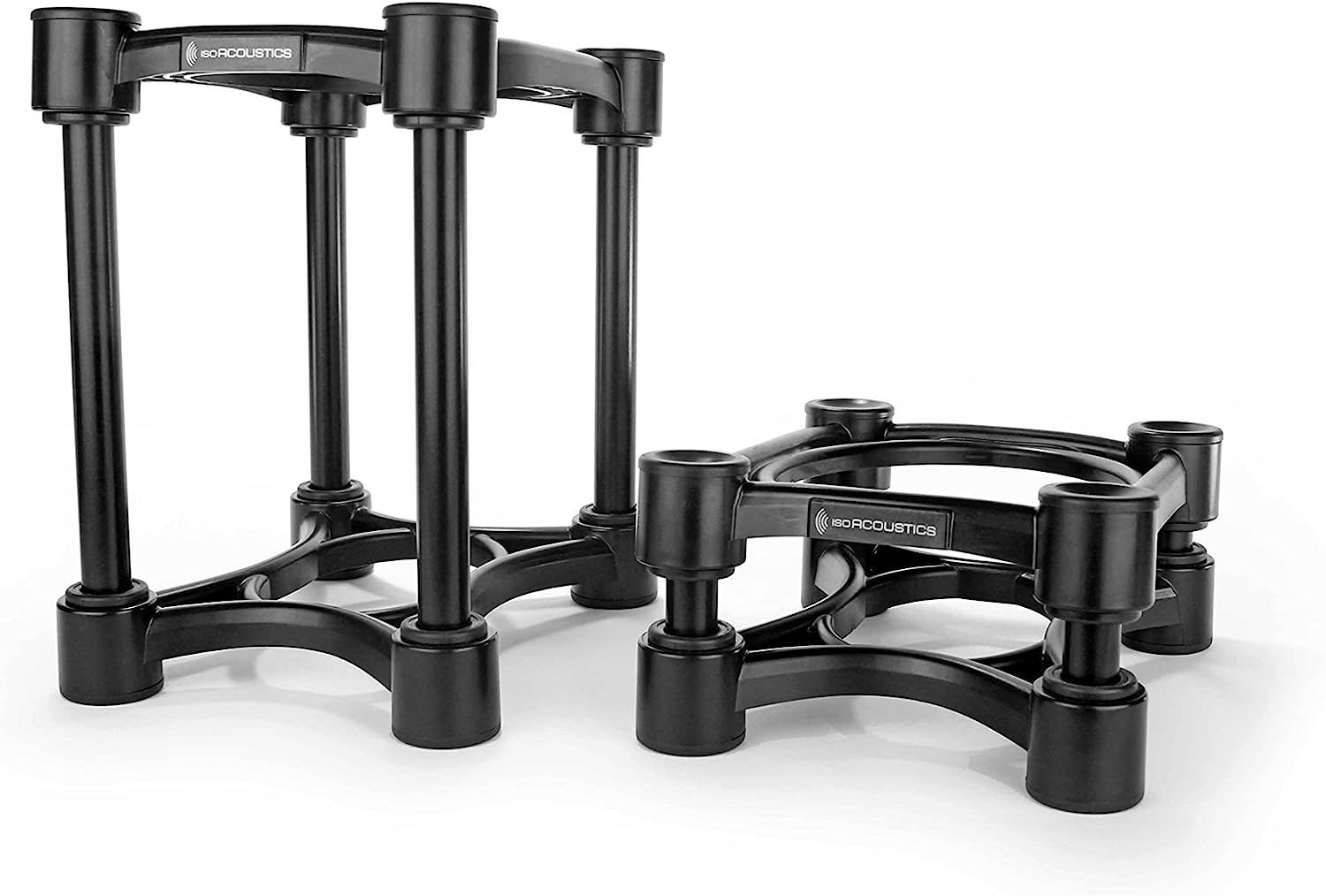 Another similar option are individual leg props like these: 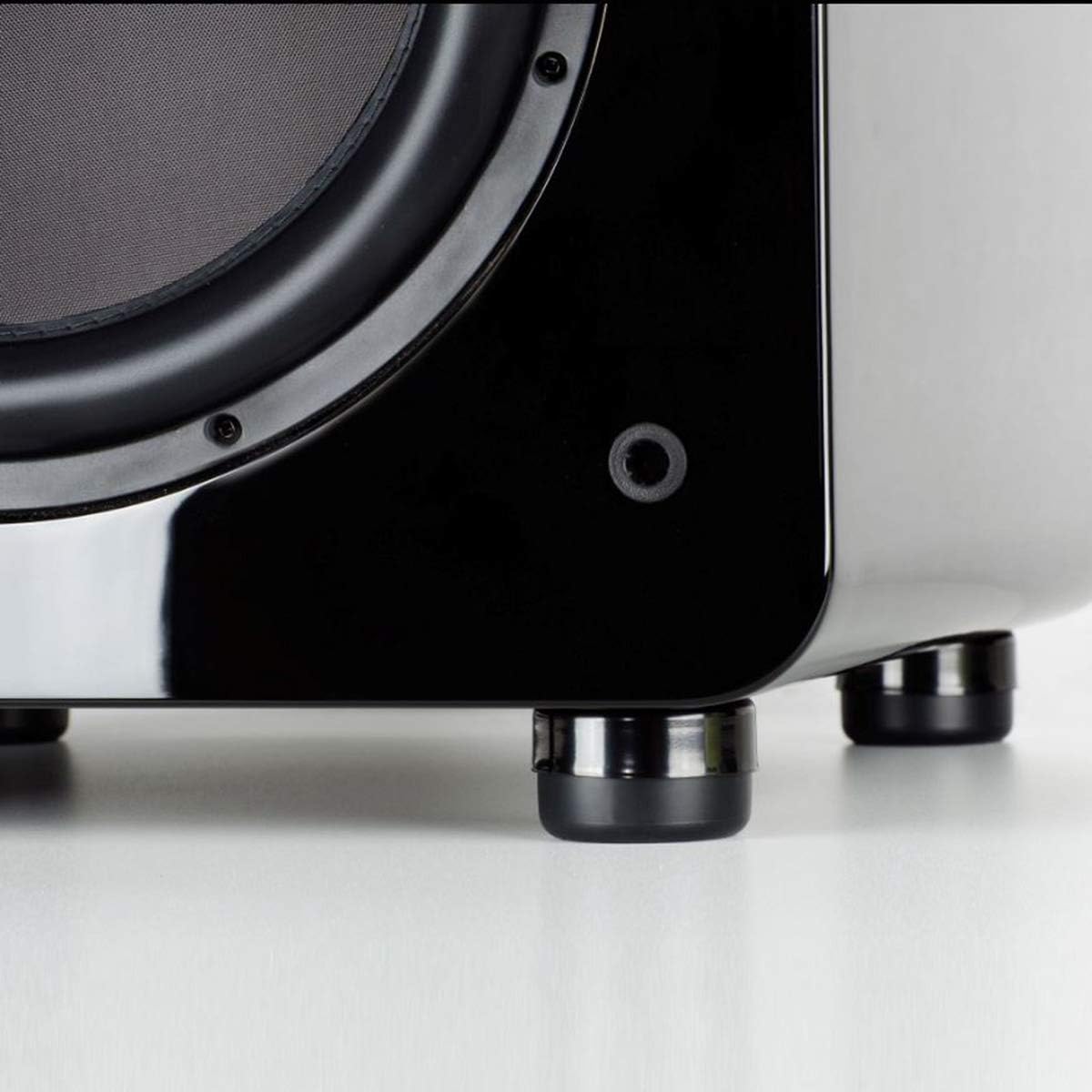 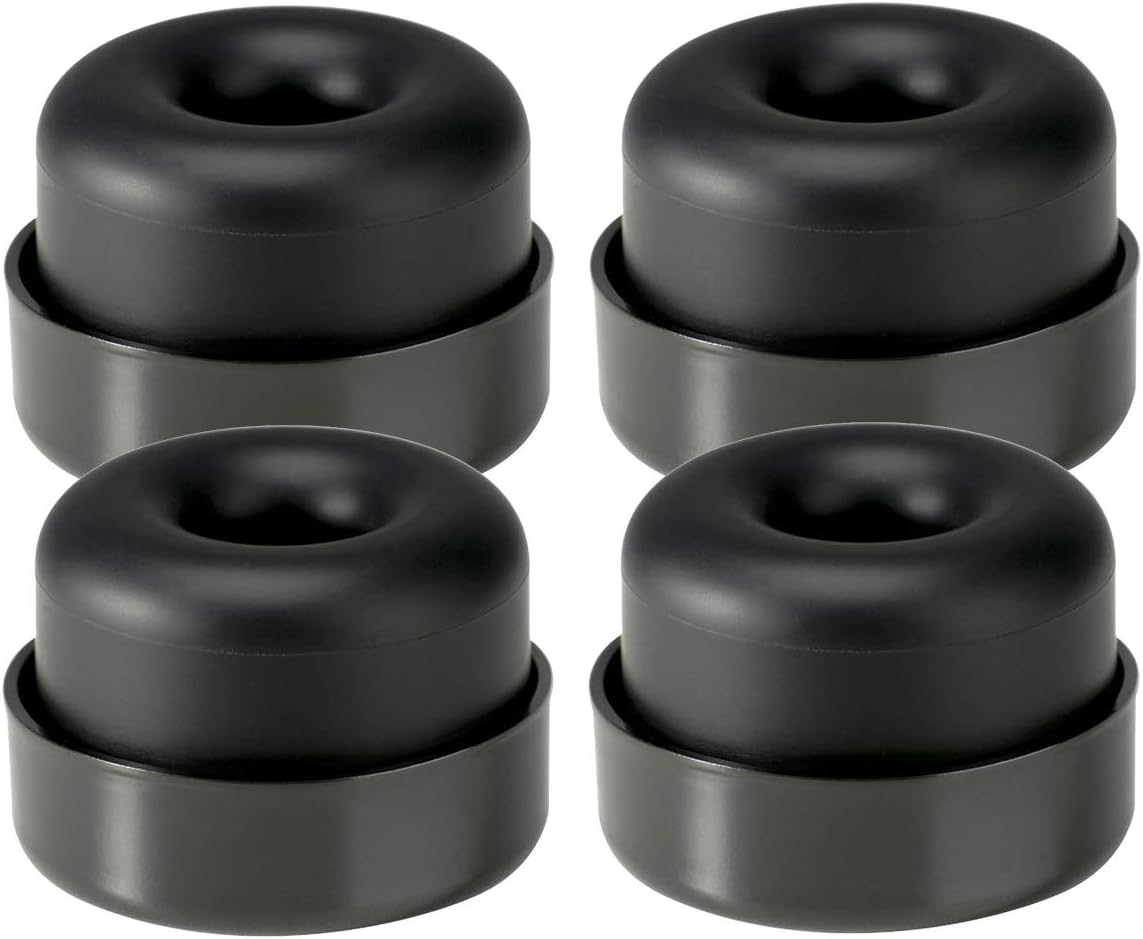 A potential problem with isolation stands is that it might compromise the design and sound thusly of a subwoofer, depending on what kind it is. Many subwoofers use a downward firing port or driver that’s intended to be close to a hard surface as it would be if the sub were just sitting on the floor on it’s own stands, and if you elevate it and dampen its natural movements it might sound noticeably worse.

With that said, isolation stands are best used with, in our opinion, subwoofers that use a sealed design and/or don’t utilize downward firing ports or drivers, which is probably the ideal choice if your primarily concerned with mitigating resonance that could annoy any neighbors.

Subwoofer isolation pads: what are they? should you use one?

Another option is a dampening pad, or sometimes called riser foam: 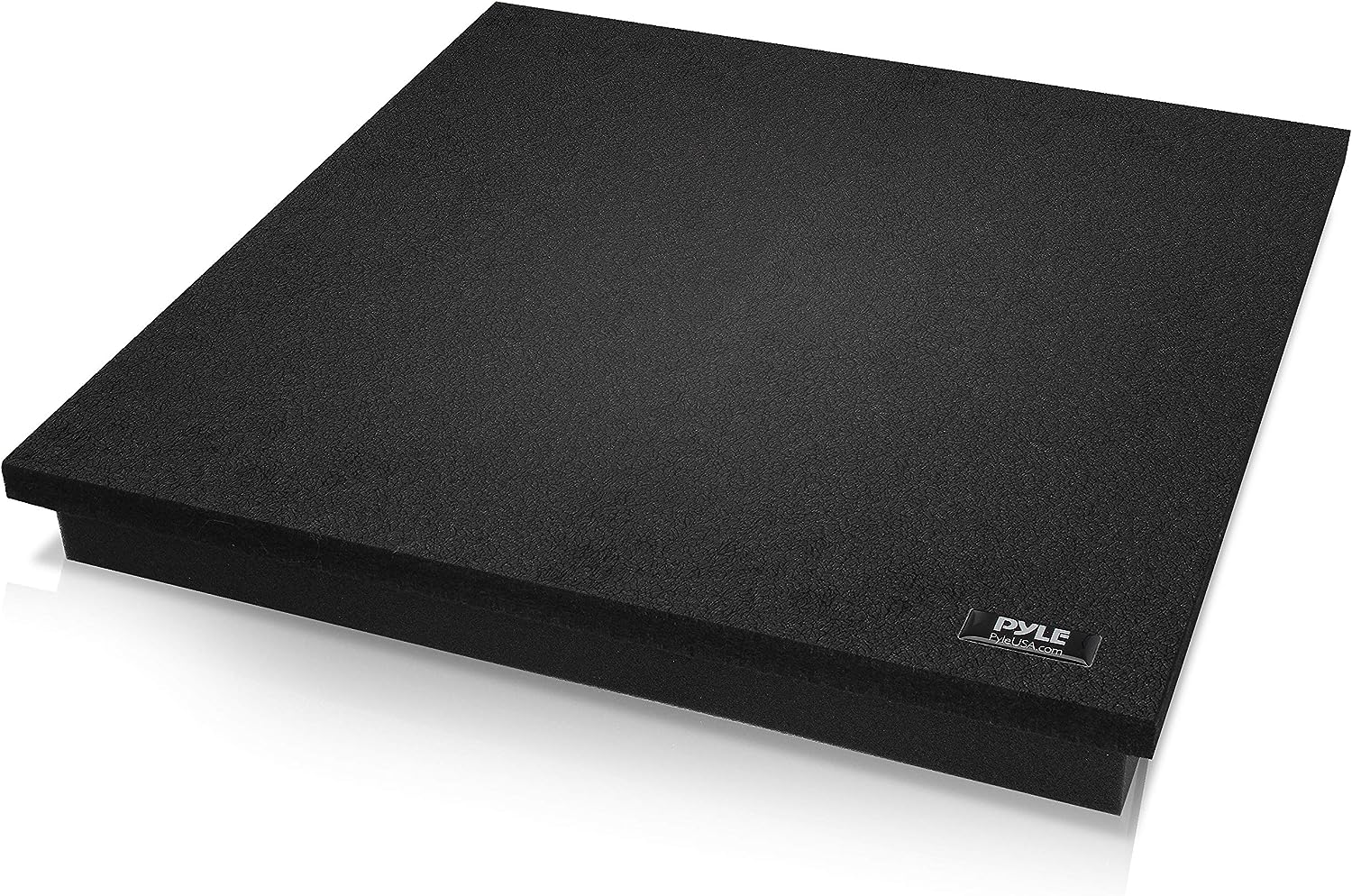 The primary purpose of an isolation pad isn’t so much to elevate the subwoofer or minimize resonance (although it certainly can serve those purposes at least somewhat), but rather to decouple the subwoofer from the floor and tone down any harshness or boomyness which can sometimes be a bit much, depending on the type of floor, the subwoofer itself, the media that’s currently being listened to, or a variety of other factors. For example, floor and wall reverb can give movie explosions a nice extra umph, or maybe is a little too distracting if you’re listening to, say, classical or jazz music.

Isolation pads are not very expensive and, in our opinion, are just a good thing to have lying around that you can try adding to see if it makes a positive or negative difference.

Subwoofer box stands: what are they? should you use one?

A box stand is a sturdier and probably more aesthetic type of stand that more resembles a piece of furniture. Box stands usually come with their own built-in treatment that’s sometimes proprietary, and while that can work great it’s often significantly more expensive. We’ve seen some specialty vendors selling box stands for several hundreds of dollars or more!

We are very skeptical of the ostensibly claimed benefits of expensive box stands (and ultra expensive audio gear in general for that matter), and haven’t seen any evidence to suggest that the same benefits, measurable or otherwise, can’t also be achieved with a cheap stand, and/or some cheap treatment, and/or some diy elbow grease if you have it in you.

A nice box stand might be worth paying for if it looks better in the room. Room aesthetics is an absolutely legitimate aspect of home theater/audio that some people care a lot about, and we’ll admit a lot of speaker stands are frankly pretty ugly.

Can I just put my subwoofer on a shelf or cabinet?

That might be able to work with the right equipment and some cautious planning, but much more likely than not it’s a bad idea, for a few reasons:

Subwoofers are a lot bigger than bookshelf speakers, often over 1.5 feet tall/wide/deep, and just won’t fit in most shelves or cabinets. And even if one could technically fit, subwoofers (and speakers in general) need additional space to “breathe” and propagate sound properly. A subwoofer enclosed in a shelf will likely sound boxy, boomy, and noticeably off, even to a non-expert.

Subwoofers being big means that they are also, not surprisingly, quite heavy. Even more moderate budget-tier subs will often weigh 30-40 lbs or more, which is not something you can just plop onto any old shelf/cabinet without thought. A subwoofer crashing down off a broken shelf is going to be an expensive drag, or worse, a serious injury.

Most run of the mill shelves or cabinets are just not designed to handle sound equipment, and while a smaller bookshelf speaker might be ok on furniture with a pad or some other treatment, bigger subwoofers emitting lower frequency sound is probably going to cause a lot of resonance, rattling, buzzing, and/or all sorts of other undesirable side effects.

Do you *absolutely* need a stand, pad, or anything else of the sort to go underneath a subwoofer?

No, definitely not. In fact, many manufacturers design their subwoofers to sit directly on a hard-surface floor, with a downward firing port or driver a mere inch or so away from it, and actively discourage the use of any stand, pad, ect., with their product(s).

But in our opinion a stand, pad, or even a simple rug/carpet underneath a subwoofer, even if the manufacturer doesn’t call for one, might still make a subwoofer sound better for you, and yes, this is once again a “your mileage may vary” situation which is pretty much always true with any audio question.

There is also the reality that some people will have to minimize resonance out of respect to their neighbors, and in that case an isolation stand or pad is most likely a good idea, and if you indeed think you’ll need to use one, we recommend a subwoofer that utilizes a sealed design or doesn’t have any front/side firing ports or drivers, and doesn’t necessarily need surrounding surfaces to maximally perform.

Speaking of which, what a great time to link to a relevant best-of article! There are now a lot of great budget friendly options for subwoofers that suit pretty much any set of goals: