Skip to content
Quick Answer: yes – there is simple equipment that can adapt a standard 3.5mm plug to a USB plug, and they also make some headphones with a USB plug instead of a 3.5mm plug.

One issue with headphone jacks, the female version of the connector that’s present on devices that are compatible with standard 3.5mm headphones, is that they can break and they’re not always so easy to get in and fix.

And that’s assuming it’s even practically possible or financially worthwhile to begin with – devices are getting slimmer and slimmer and companies are taking increasingly proprietary stances on repairs, making it basically impossible for a user (or third party) to fix something and forcing them to pay up the nose for an “authorized dealer” with “specialized tools” to do it for them.

More and more companies and devices are forgoing a 3.5mm jack entirely as well.

A broken or absent 3.5mm headphone jack is an annoying bummer for sure, but using a USB plug instead can be a simple and cheap workaround, and the good news is most non-mobile devices have more than one USB slot, and USB isn’t going anywhere anytime soon.

The simple/cheap way: a basic adapter

There are now a myriad of cheap adapters that effectively convert a USB wire to a 3.5mm headphone wire with minimal clutter and fuss. We like this one, for example: 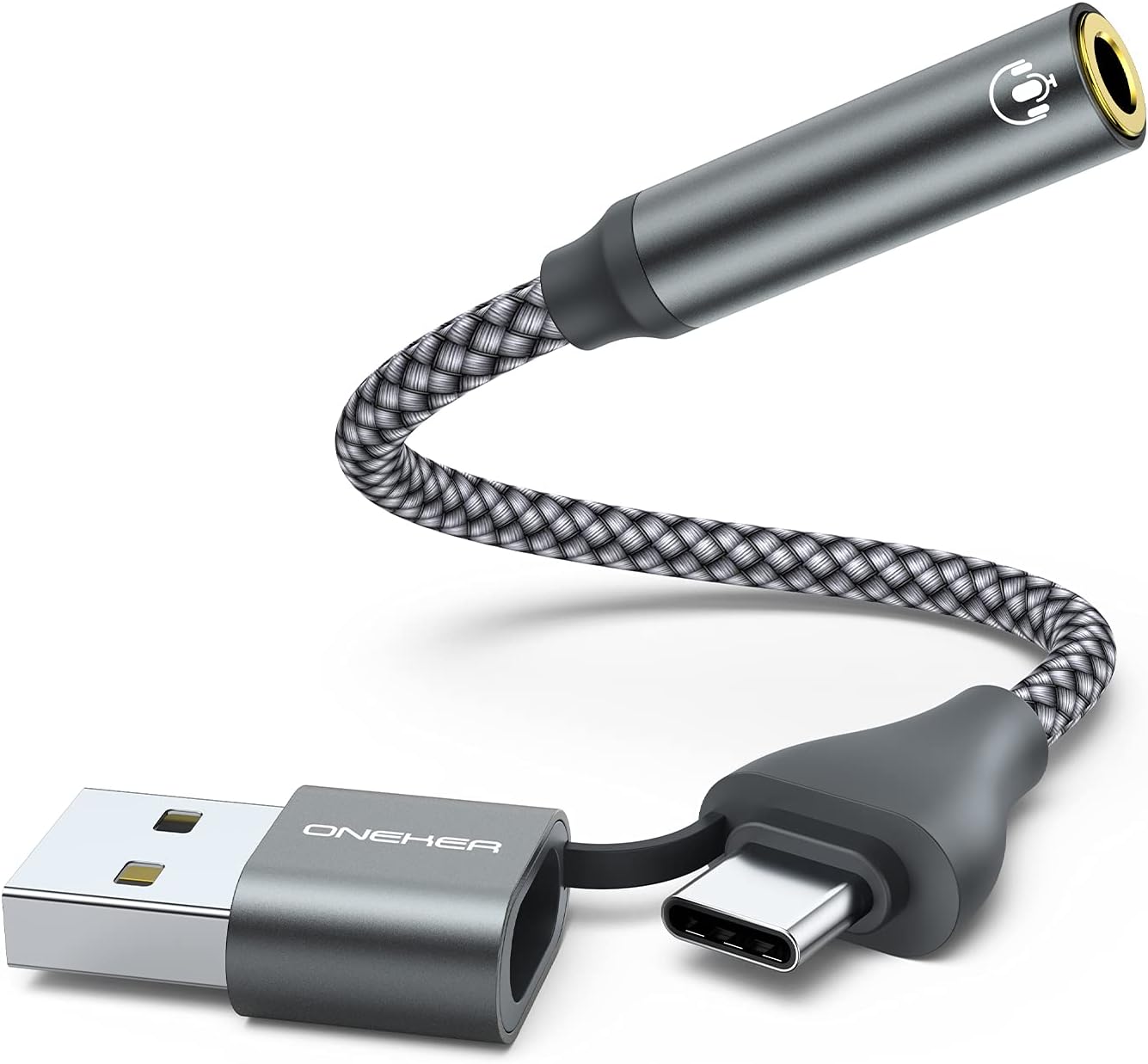 works with both USB 2.0 and C (affiliate link)

Some of you might be wondering: how can a digital signal that comes out of a USB slot work with a standard pair of headphones or speakers, which require a line-level analog signal? Answer: these adapters actually have their own DAC (digital analog converter) built in.

Is switching to a cheap DAC that fits on a thumb drive that’s less than $10 going to compromise sound quality? We’d say that’s actually very unlikely. Simple onboard DACs are a pretty much solved technology at this point, meaning, a DAC isn’t going to bottleneck a popular/standard compressed audio file that’s ultimately coming out of an inexpensive pair of earbuds.

Further reading: do I really need a separate DAC?

Did we just say that external DACS are mostly worthless and won’t do anything to improve sound, and link to an entire article we wrote that expounds on that? Yes.

Have we also said that headphone amps don’t actually do anything to improve sound quality? Yes again.

So why would we recommend thinking about getting a headphone amp/DAC combo? Mainly because a headphone amp is a nice thing for anyone to have, incase they might want to, at some point, invest in a nice HiFi pair of headphones that might need one.

Most modern headphone amps have an on-board DAC, which while it might not proffer any noticeable advantage to whatever is in your device, does give the option of hooking up to a 3.5mm or USB input.

Headphone amps also have a volume knob and can also come with a myriad of EQ controls and such, which are things that many people would and do like to have and use.

Another alternative: a USB headset/pair of headphones

There are an increasing number of headphones and headsets, which are basically a pair of headphones with a built-in mic and inline voice/call controls that are oriented for gaming or other similar communicative use, that plug directly into a USB slot.

No, not really. If anything sound quality might be worse since there’s less options to choose from and it costs more money to put in the extra ancillary components that a USB headphone/headset must have – you’re not going to get the selection or quite the value per dollar spent as you would with traditional analog headphones.

But that could change sooner than later, and there are many headsets that sound quite good, as audio fidelity with gaming in particular is being demanded more and more.