Knowledge Zenith, usually referred to as KZ for short in the audio world, is one of many so called “ChiFi” companies that has cropped up in recent years, and in a rather short time they’ve become quite popular in the headphone world.

If there’s a word that pops into my head when it comes to KZ, it’s definitely proliferate. The company produces a lot of headphones now, and I mean a lot – I counted 38 on the main product side bar of their front page, and that’s in addition to the many more tens of deprecated/legacy products and products of their subsidiaries and/or associates. More on that in a moment.

As of this writing/update, I currently own and have reviewed about fifteen of KZ’s products, which in addition to my general knowledge and additional experience reviewing and/or listening to hundreds of different speakers and headphones has given me enough experience at this point to have a say in the matter. But first, to give some context, I’d like to discuss the so called “ChiFi” revolution and where Knowledge Zenith came from specifically.

The “ChiFi” revolution and sub-history of Knowledge Zenith

“ChiFi” is a colloquialism born from “HiFi,” or “High Fidelity” (i.e. high quality) audio. It’s a word that’s come to describe the many obscure no-name audio companies that have seemingly sprung up like weeds in not just China but various parts of Asia, which most people realize has become the de facto powerhouse of electronics manufacturing for pretty much the entire world at this point.

No longer do these companies have to white label their products under popular American or other such brands (but of course many still do) in order to get feasible distribution. Thanks to the likes of Amazon and Alibaba these companies can now sell outright direct to consumers.

Enter Knowledge Zenith – KZ is the brand under which Shenzhen Yuan Ze Electronics Co., founded circa 2008, produces earphones. One of the founders, Keith Yue, was formerly an engineer for Audio Technica, a highly popular and regarded company in the audiophile world, and a signal to many that KZ and their offerings are legit.

Additionally, there are several companies that either sell KZ earbuds or clearly utilize a KZ design in their own products. Despite doing research I’m still not exactly sure how all these many companies or brands are actually legally related, but they are and are not limited to:

Many of these different earphones from different companies look suspiciously the same (and definitely are in some cases), which, like I said, I don’t understand how they’re all related, but from what I can tell they are all in effect KZ products and/or designs.

Almost all KZ earphones have the same ergonomic case design and have two pin connectors that pair with detachable cables: Some of the older ones have a less contoured and more retro look, but more or less follow the same setup: worn inverted with a detachable 2 pin cable that hooks behind the ear. 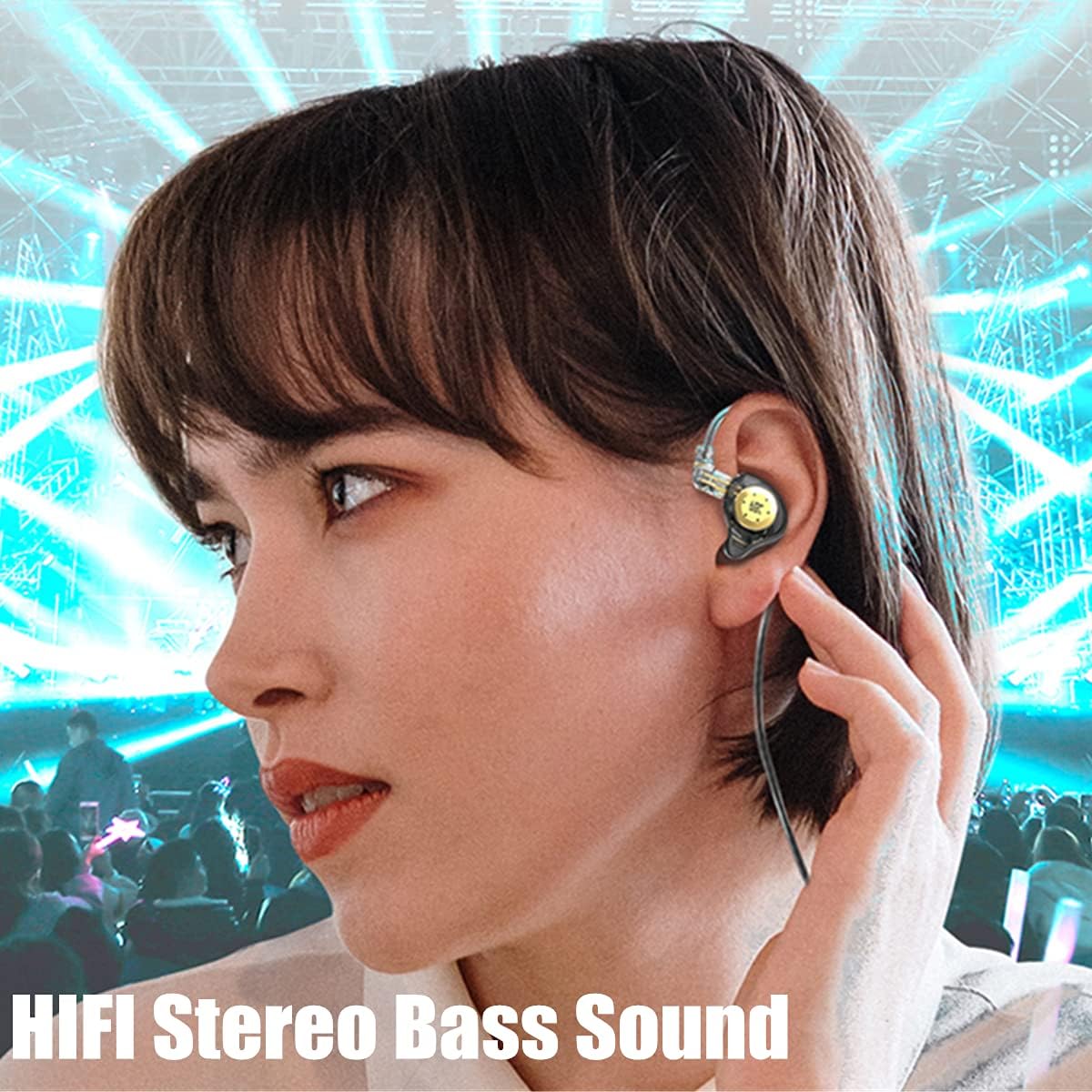 EDX pro worn like so, per one of their adverts (affiliate link)

The inverted style might seem strange to the uninitiated, but a lot of manufacturers use it and actually advise people to wear earbuds this way – it helps keep them secure and avoid the feeling of them hanging out and down.

KZ earbuds, despite admittedly looking and feeling rather bulky and heavy, have generally fit me very well out of the box and maintain a solid seal no matter how I move my head or jaw around. They’re a bit more of a pain to put on and take off though.

What is the sound signature or style of KZ earbuds?

KZ earphones, in my experience, seem to fall into two categories: a very bright, crisp, and arguably harsh V shape, or a relatively flat and even neutral shape. The former I generally disliked (the KS1, Ate, 12, ZSN Pro, and ZST pro for example), while the latter I generally thought sounded best in class (the EDX Pro and ZS10 Pro for example).

Some people do like the bright/crisp V shape though, and there are times when models I didn’t particularly like seemed to otherwise get high praise. Like I’ve said, audio is always subjective to a degree.

I will say that KZ earbuds generally have great individual clarity, separation, detail, and bass extension.

What about the controversy surrounding KZ?

Yes, even the pristine world of audiophilia is not immune to drama, and unfortunately KZ did somewhat recently get caught up in a scandal.

Long story short: KZ advertised that some of their products had multiple drivers, which theoretically can improve responsiveness and overall sound quality (like a speaker system with multiple sized tweeters and woofers), but a few inquisitive individuals discovered that some of said drivers were dampened to the point of not being measurable or straight up not actually connected and doing anything. KZ was (allegedly, I don’t want to get sued) basically part/spec stuffing their products to make them look better on paper than they actually were.

Headphonesty.com did an extensive write up of the entire ordeal here if you’re interested in the full story.

Here’s my hopefully succinct take on it, insofar as it’s relevant to this article:

If I were to guess, I’d say the scandal was more a function of marketing claims stretching to the eventual point of technical dishonesty rather than blatantly nefarious deception. And as far as I can tell, per Headphonesty.com’s write up and my own additional research, KZ is trying to rectify the issue.

I will say that an earbud with no less than 10 individual drivers crammed into it does sound frankly ridiculous – I haven’t listened to most of KZ’s more expensive earphones, but likely will eventually with some newfound skepticism. We’ll see.

So, are KZ earbuds actually good?

“Good sounding” in the audio world will always be subjective, and often to a significant degree. And some audio product “styles” differ but aren’t necessarily “better” than one another, kind of like how some people prefer chocolate ice cream and others vanilla.

That being said, by objective standards – and my extensive but ultimately subjective listening experience – yes, KZ earphones are generally good. They are especially good and competitive in the budget-tier (less than $20-$30) – some KZ earphones have arguably the best overall sound and built quality for the price.

Yes, it is unfortunate that reputable reviewer Crinacle’s consult with KZ, which initially gave the community great promise to a subsequently developed earphone, went awry and ultimately resulted in him indefinitely distancing himself from the company. But, the unfortunate reality is that this kind of thing is not at all new to the audio world. Plenty of companies, even historically reputable ones, have their fair share of scandals.

And plenty of largely decent companies release products that are just bad – it inevitably happens in any kind of technologically innovative field. Some of KZ’s earbuds that I’ve listened to I thought are not good at all while others are excellent and best-of list worthy.

Which of KZ’s earphones are the best?

As of the time of this writing/update:

The best budget-tier KZ earphone in my opinion is the EDX Pro: They have have a nicely even/neutral signature that’s also not harsh and easy to listen to. Great build and cable quality as well for less than $20. Check out my full review of them here.

The best, I guess I’ll call it, value-tier KZ earphone in my opinion is the ZS10 Pro: They have really good, detailed even sound and the same solid build quality, and are close to (if not the) best sounding earbuds available under $50 I’d argue. Check out my full review of them here.

All in all, I’m a fan of the ChiFi trend and am excited to see what kind of new products these niche companies continue to create.