The headphone market, and audio market in general for that matter, is interesting because products can get very expensive – like ten to even one hundred times more expensive than their budget counterparts – and it’s not always obvious or apparent as to why.

To date I’ve tested and published reviews for around 50 different pairs of headphones and earbuds (and listened to yet many more) varying in price from ultra-cheap to quite expensive. and part of my journey as… I guess I can dare call myself at this point… an audio professional has been answering the price vs quality question for myself.

Here’s what I generally think about it as of now:

All that said, the audio world generally seems to believe that there are specs and factors that make headphones sound better, and I’d %100 agree with that based on my personal experience. That’s what I’m going to discuss in this article, as well as what doesn’t actually matter much or at all since we’re at it.

I’d say yes, this is generally true, and multiple reputable manufacturers have stated the same thing. The main thing a bigger driver can do is produce bass that can both go lower and sound better.

However – while a larger headphone driver can produce mids and highs just as well as a smaller one can, it’s harder for it to do so effectively, and so building a performant larger driver takes a higher standard of design, engineering, and materials, all of which will obviously increase cost.

Point here being: headphones that are larger do generally sound better if they’re more expensive, but the cheap yet still comically large headphones generally don’t sound all that good and frankly often worse than similarly priced earbuds.

Larger headphones also tend to be more comfortable, one reason for that being that they can accommodate more and better quality padding. But again, better built quality and resultant comfort/fit also costs more money, making the case for needing to pay more all the more true.

Do headphones with a wider and more even frequency response sound better?

Definitely yes, and I’d say that, theoretically, this is the most important spec that’s indicative of overall sound quality.

The problem is, though, that a manufacturer claiming a frequency response of, say, 20 – 20k Hz, doesn’t actually tell me or you the user much at all (if anything even) about the headphones’ *actual* frequency response.

The first issue here is that manufacturers, moreso the more obscure companies who produce cheaper products, will fudge or outright lie about this spec.

The third issue here is that just because a headphone is technically responsive and can produce measurable sound at a given frequency, it doesn’t mean that that sound is being “perfectly” reproduced. For example, a lot of headphones claim a response floor of 20 Hz, which is roughly the lower limit of human hearing, but in reality the bass will start to drop off at a much higher frequency than that, and sound noticeably recessed, lacking, or otherwise weird/off.

Some companies do publish multi-iterative frequency response tests with a decibel range, +/- 3 dB is the generally accepted standard, which means a measured response is reasonably close in volume to the rest of the sound and things are more or less even overall. 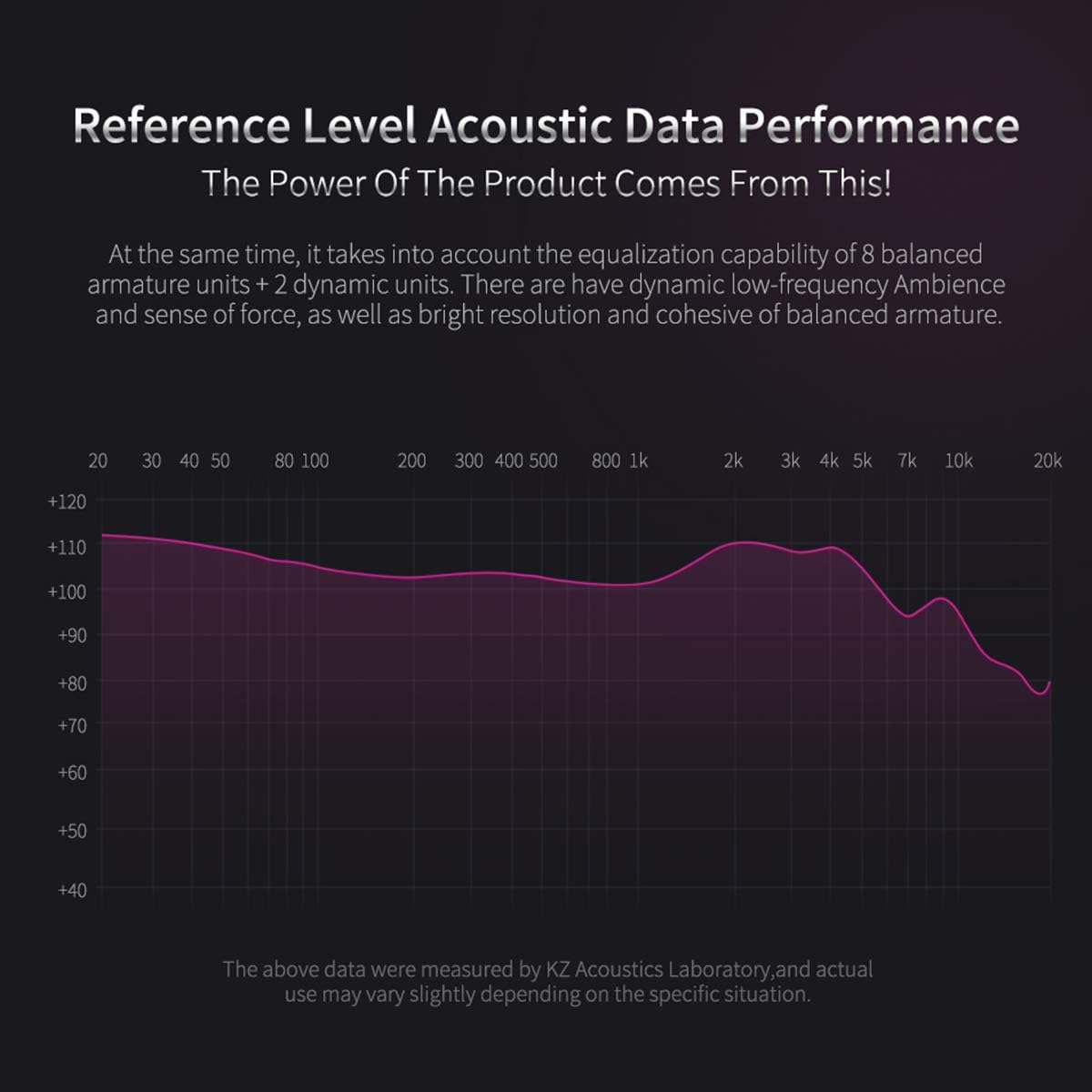 An example of a published frequency response graph (affiliate link), with a ymmv disclaimer, of the KZ ZS10 Pros (reviewed here)

So if frequency response range is theoretically the most important spec that’s indicative of overall sound quality, does a better quoted frequency response on a spec/sales sheet mean in actual practice that the headphones will sound better? Not really in my opinion, unfortunately, and the spec is basically useless when dealing with budget-tier headphones or earbuds and I pretty much ignore it, unless there’s some legit data to back it up, which is almost never the case.

I have not really noticed an appreciable difference in driver type with headphones (or speakers for that matter), rather I think what actually matters is that the driver type that is chosen, whatever it is, is well designed and built.

There’s no practical or theoretical argument, that I’ve seen at least, that an old fashioned dynamic driver with a magnet and coil can’t produce sound quality that’s just as good as a fancy and probably expensive electrostatic driver for example. If a headphone with newer tech is more expensive and sounds better, it’s probably because it’s just better designed and built in general

Do headphones with a higher sensitivity rating sound better?

In theory, yea probably, but in practice, I don’t think this spec ever matters enough to actually care about. Why? because – it’s very rare that a pair of non-specialty/expensive headphones can’t get loud enough. In fact, if anything people are much more inclined to listen to headphones too loudly than not.

Sensitivity is basically a measure of how efficiently a speaker or headphone can create volume/loudness with a given amount of power. With traditional bookshelf speakers this is a much more pertinent and important spec, in my opinion, because they need to radiate sound an appreciable distance to fill a room, and also because power input from a traditional amp or receiver is much more likely (but still not that likely for most people with most setups) to be a limiting bottleneck.

But headphones and earbuds especially need very little power to achieve adequate volume – yes, even the mere millivolts from your device are far more than enough to drive just about any non-specialty/expensive headphones.

There are higher end headphones that need significantly more driven power than an average budget pair, but this is easily and usually solved with a headphone amp.

Do headphones built with certain ancillary materials sound better than others?

When I say ancillary I mean any and all materials that don’t directly produce the sound but are still essential, so things like the housing/shells, the grills, the headband, the padding, etc.

This stuff does actually matter for sound quality, and though it might be indirectly for the most part, it matters moreso than most people realize I think.

One of the perennial engineering hurdles with speakers is reducing unwanted resonance and other movement in the cabinet – the omni-directional sound waves that woofers produce, and woofers’ movements themselves, invariably impose physical pressure on the cabinet and other components that can create and/or alter the sound in unintended and undesired ways.

That is just as true and pertinent with headphones, which are essentially just small speakers designed to sit right next to your ears. Well built and tuned housing, ear pads, etc. can definitely effect sound quality.

This is yet again true with earbuds – if the bud, nozzles, tips, ect. don’t create a solid seal or fit properly, it can literally ruin the sound and essentially render them nonfunctional.

On top of all this, good ancillary materials are essential for comfort, which is crucial for a good experience with headphones – any specifically noticeable discomfort will also quickly ruin a pair of headphones for a given user.

This one is unfortunately tough to assess without actually getting to actually try on and test a pair of headphones – you can’t really tell if any given pair is well built by looking at it.

There are a couple general traits with earbuds specifically, however, that in my experience do somewhat predictably lead to a good vs poor fit: … as opposed to this: 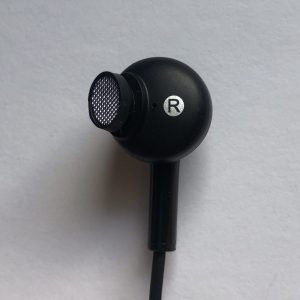 Do headphones with a “premium” cable material sound better?

No. audio cable is audio cable – 99% or more of the time it’s made out of copper, which is cheap and perfectly sufficient for transmitting audio signals.

What does actually matter somewhat is the cable insulation, or the outer layer(s) of material that shield the actual wire – you want it to be decently thick and weighty, and also smooth so that the microphonics (the noise that transfers through if it gets hit, dragged, touched, etc. from the outside) is reduced to a minimum. But good insulation doesn’t have to cost all that much more money.

This became kind of a long winded and admittedly somewhat opinionated article, but the truth about audio – and I think people in the industry often don’t like to admit or concede this – is that it is always going to be subjective and opinionated to a fairly significant degree.

As I’ve said I’ve reviewed and listen to a lot of headphones and earbuds, budget ones in particular (which often don’t ever get actual legit reviews), and the greatest asset this gives me, frankly, is a strong frame of reference to pick out products that noticeably stand out from the rest. With that I can often single out specific traits that warrant discussion in an article like this, but other times merely speculating is the best I can do.

And I’m still just a single person, and my mind – and reviews thusly – have and continue to change as I get more and more experience doing this audio stuff. I suspect this is one of those articles that I’ll come back and continue to update over time.