The budget audio market, specialty components in particular, has grown massively in just the last decade – all kinds of great setups are now possible for even the layperson on a low three figure budget. And we see no reason why this market will not continue to proliferate – more and more people want to enjoy high quality audio.

The first audiophile “level up” for most people is the speakers – probably not surprising to you, and as it should be. While ancillary components can and do matter a great deal, and can significantly improve sound and/or the overall experience, the speakers are without a doubt the most important part of the audio equipment chain, and where you’re going to get the most bang for your buck quality wise, especially if it’s your first upgrade over some basic computer speakers for example.

There is one common restriction that the newly initiated have with an audiophile-aspiring desktop setting however, which is that most decent desktop/bookshelf speakers are passive, meaning they connect with traditional speaker wire and can’t just plug right into a 3.5mm jack like cheap computer speakers can.

And while the selection of powered speakers that *can* plug right into a computer has also increased a lot in recent years, and many of them are very good in their own right, passive speakers still (and probably always will) give you the most value quality wise, and there’s so many more of them to choose from than powered speakers.

So what do you need then to overcome this restriction and use passive speakers in a desktop setting? You only need one simple thing: an amplifier.

What does an amplifier do, and do I need one?

The audio signal that comes out of the 3.5mm plug on your computer or other similar device is usually enough to power a pair of basic headphones, but loudspeakers need many times more power than that to function. The amplifier is what provides that power – it takes the signal coming out of your device and, using good ol’ principles of electrophysics, increases the wattage enough to actually move the components of a loudspeaker.

A powered speaker is effectively just a passive speaker with an amplifier built into it. Basic computer speakers are usually powered and are what most people are used to using. They offer simplicity and avoid clutter from external ancillary pieces of equipment, but usually at the cost of quality and overall value.

If you want the option to use passive speakers, then you’ll need an amplifier. The good news here though is that there are now many good ones that are inexpensive, small, and not at all difficult to set up.

The issue with traditional receivers in a desktop setting

Could you power a pair of passive speakers at your desk with a regular receiver? Sure, absolutely, and there’s nothing technically wrong with doing that.

But there are a few drawbacks with doing it that way:

Receivers are big, heavy, and potentially radiate a fair amount of heat, which is obviously not ideal in a desktop setting with limited space. Receivers also have a bunch of features that you likely either don’t need or are redundant in most desktop settings. Finally, in necessarily needing to pay for said features and the size to accommodate them, receivers are more expensive than plain amplifiers.

You’d be hard-pressed to find a decent 2 channel receiver for under $150, whereas there are plenty of amps that can effectively get the job done for a fraction of the price.

What to look for in a budget amp

It’s particularly important to pay attention to specs, build quality, etc. with budget equipment because this is where companies might try to cut corners, which might leave you with a bottleneck, or worse, a manufacturing flaw that detriments the usability of your system.

Here is what we look for and think is important:

Power, or watts per channel (wpc) – if an amp can deliver up to 50 wpc, then it’s probably fine for 99%+ of bookshelf speakers in a near to midfield settings.

Bluetooth 4.0+ (if you want it) – for those who want wireless capabilities, a decent Bluetooth chipset compatible with, at this point, v5 ideally but v4 is fine. Keep in mind you can get wireless in other ways and don’t necessarily need it in the amp itself. 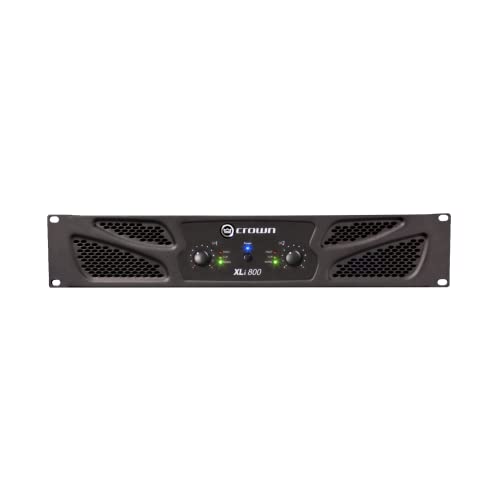 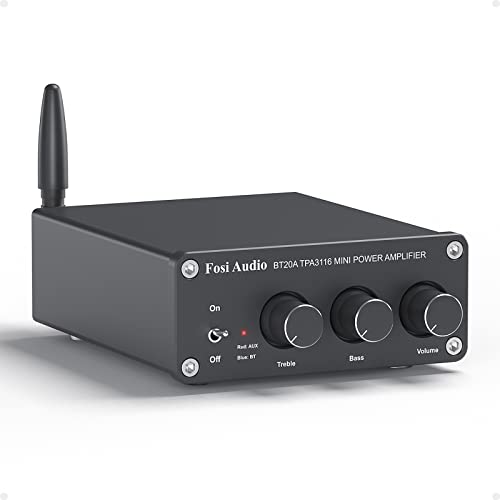 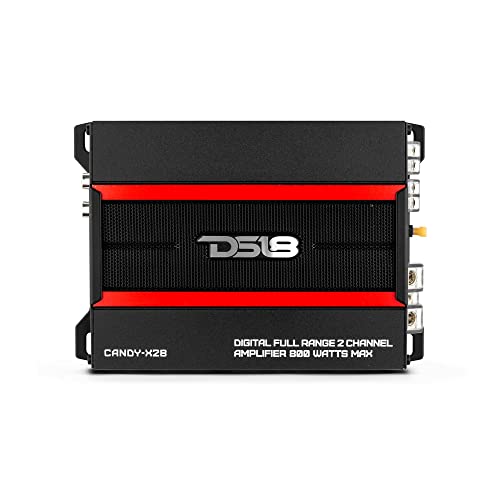 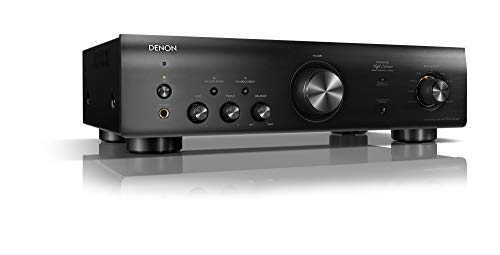 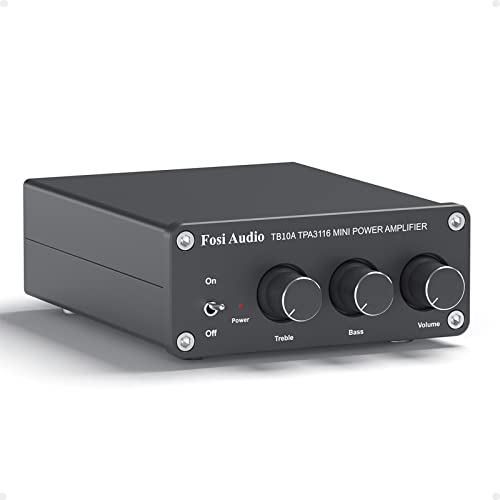 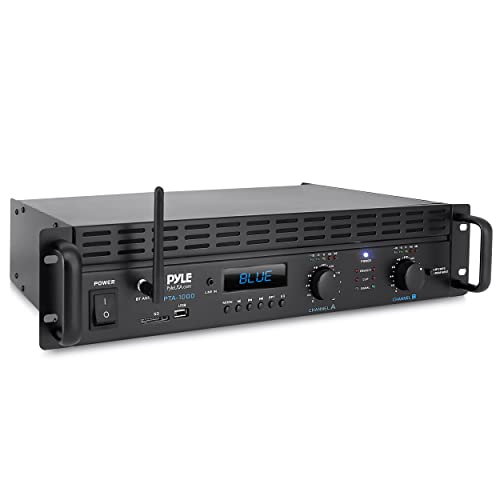 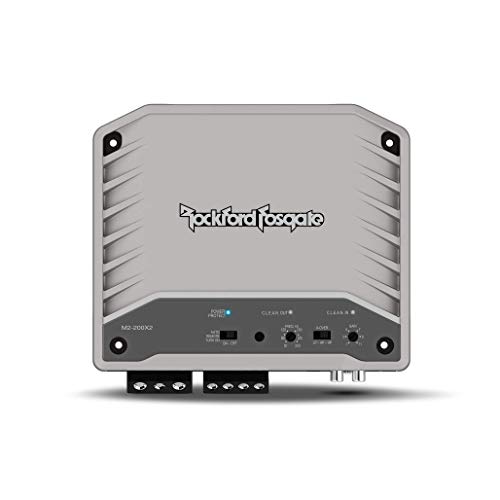 Now lets get to our current top picks and the discussion thereof: 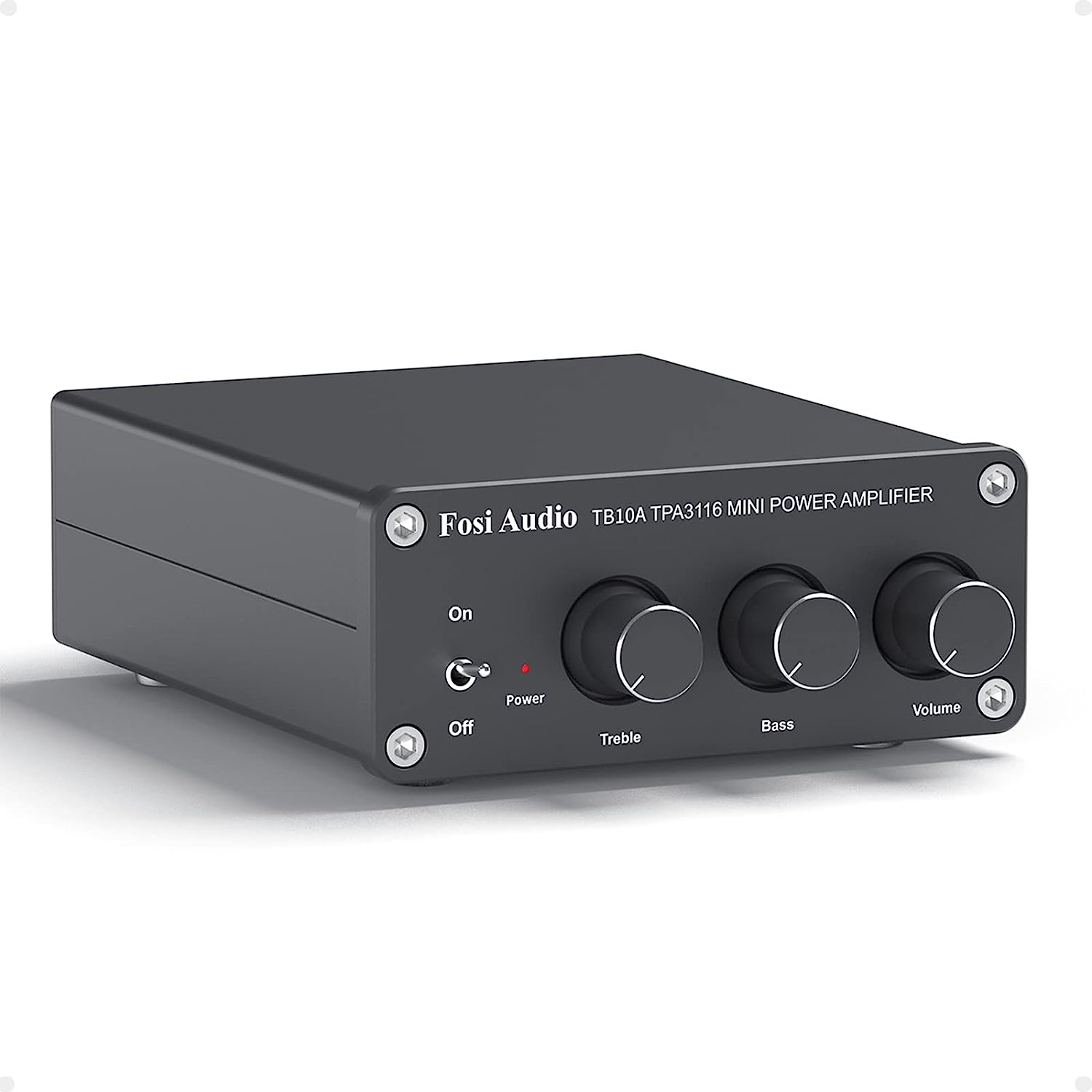 Fosi Audio has somewhat recently come into the audio scene in a pretty big way by making several high quality and impressively powerful amplifiers at some of the best prices available.

The TB10A is their current most basic 2 channel model and is an excellent choice for most people. Two 100 W channels, a nice sturdy chassis, solid switches and knobs, 5 way binding posts, two bass/treble EQ controls, and no extra fluff to clutter up your desk space.

Hooking this up to a standard 3.5mm jack is very easy – all you need is a male/male RCA to 3.5mm Y cable, like this one:

Keep in mind there is no connection cable included because what’s needed will differ based on your desired setup, so you’ll have to get one separately if you don’t already have it.

Or, you could get the similarly popular BT20A, which is basically the same but includes Bluetooth 5.0 compatibility for a little more money: 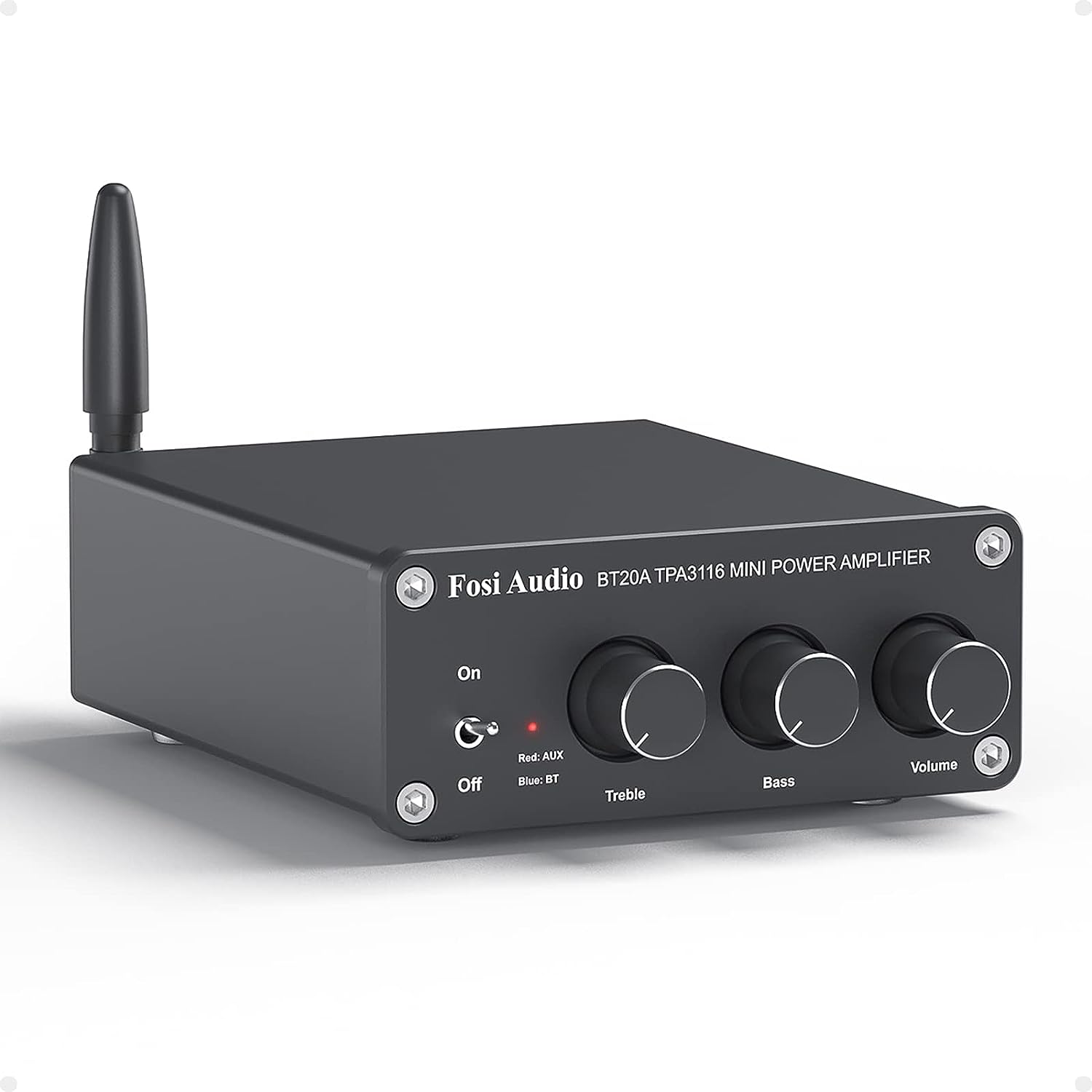 Fosi Audio also makes 2 x 50 W (half the total power) “mini” amps, both similarly with and without Bluetooth, for a little less money, and that’s going to honestly be plenty of power for most desktop/nearfield setups, but it might falter with bigger and/or lower impedance speakers.

Spending an extra 15-20 dollars for 100 W main channels is definitely worth it in our opinion, but not necessarily required.

Close honorable mention – The Aiyima A07

The A07 is similarly well built and competitively priced, and boasts a whopping 300 watts per channel, though we’re suspicious something this cheap can actually achieve that, and there’s definitely no way it could achieve that with the included 32V 5A power supply. It can, according the the manufacturer, take up to a 48V 10A power supply but that would need to be purchased separately.

But here’s the thing – in a nearfield setting, or even a midfield setting for that matter, the average person is never going to need anywhere close to that much power, or even half that.

It also doesn’t have the treble/bass EQ controls that the FOSI mini amps have, and while there’s a good chance you won’t need to actually use EQ knobs, they’re still nice to have rather than not.

One thing the A07 does have that the TB10A does not is an additional 3.5mm jack in addition to the RCA inputs, which might be a nice extra for some but isn’t of much actual consequence to its comparative usability.

So, if you want a little more available power, or maybe you come across the A07 when it’s cheaper than the similar Fosi amps, then getting it is definitely a solid choice as well.

Once again it’s Fosi Audio that brings what looks like, in our opinion, is the best 2.1 channel amp for under $100 dollars. They do not appear to make a non-Bluetooth version for a little cheaper like they do with their 2.0 channel amps.

The BT30D is only rated at 50 watts per left/right channel, which is less than that of the aforementioned TB10A and A07, but as we said, 50 wpc is almost always going to be plenty of power for nearfield setups, especially if the bass is going to be offloaded to a powered subwoofer.

In addition to the EQ knobs that the TB10A has, the BT30D additionally has subwoofer volume and frequency/crossover knobs. Most powered subwoofers already have these controls, but it’s really nice to be able to adjust things right on the amp without having to perpetually access the back of a potentially secluded subwoofer.

One interesting feature the BT30D has in addition to a standard powered subwoofer pre-out is a third set of speaker terminals for a passive subwoofer, which mainly allows compatibility with an outdoor/all weather subwoofer. Also interesting, and somewhat peculiar in fact, is that the older and less expensive BT30A has a passive subwoofer output but not a standard powered sub-out, which is really the only reason we don’t recommend the latter over the former. The BT30A is an excellent solution for powering an outdoor/all-weather 2.1 system, but otherwise isn’t all that useful for a conventional indoor 2.1 setup.