A lot of people are under the impression that learning guitar or any other instrument is an unavoidably noisy, disruptive, neighbor infuriating pursuit that they can’t embark upon because it would violate their lease and might get them evicted.

That actually isn’t true – an unamplified guitar or bass, even if played very aggressively, is actually pretty quiet. And it’s also entirely possible to send an amplified signal straight into a pair of headphones so you can personally enjoy and work off of that emblematic distorted hair-metal sound. Best of both worlds for you and everyone around you.

How do you set this up and do it? What equipment do you need? This article will cover everything you need to know about using headphones to play an electric guitar or bass, as it would be, roaring out of a traditional guitar amp.

Can you plug headphones directly into an electric guitar or bass? What happens if you do?

You could, technically – a standard quarter inch plug, perhaps screwed onto a more common 3.5mm headphone plug as an adapter, would fit into most guitar jacks. But it wouldn’t do anything, and you wouldn’t hear any sound coming out of your headphones because there’s no actual power source to drive them.

An “electric” guitar or bass doesn’t actually generate power. Rather, the pickup (that metal bracket right under where you pluck the strings) converts the mechanical energy into a relatively weak electrical signal which travels through the wire into an amplifier which then feeds a speaker where the sound ultimately comes out of.

The familiar and so called “guitar amp” that most people think of when they hear that phrase it is basically just an amplifier with a speaker built in as a conevient all in one solution: 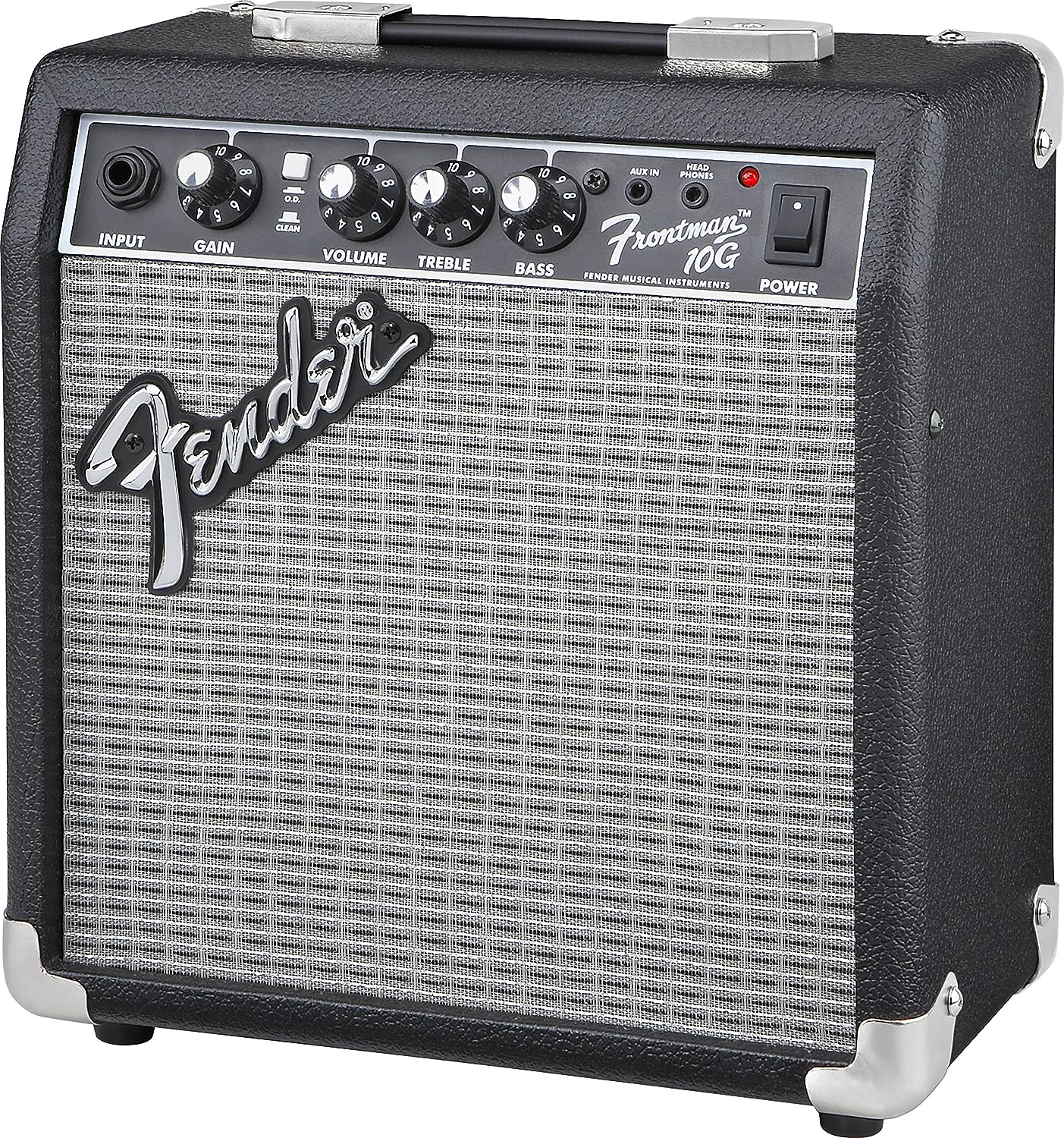 one such iconic Fender box amp, how many 12 year olds have owned one of these? (affiliate link)

Can you plug headphones into a guitar amp?

Yes – many guitar amps, even the popular budget/starter ones, have a dedicated headphone jack because companies realize that not a lot of bystanders like to listen to beginners learning guitar.

similar results may occur with Smoke On The Water or Wonderwall

It will usually be clearly labeled with “phones” or “headphone out” or something similar:

One thing to be aware of is that, for whatever reason, the larger quarter inch jack seems to be more commonplace on guitar equipment. You can still use a standard 3.5mm headphone plug with that input, but you need a simple adapter like his one: 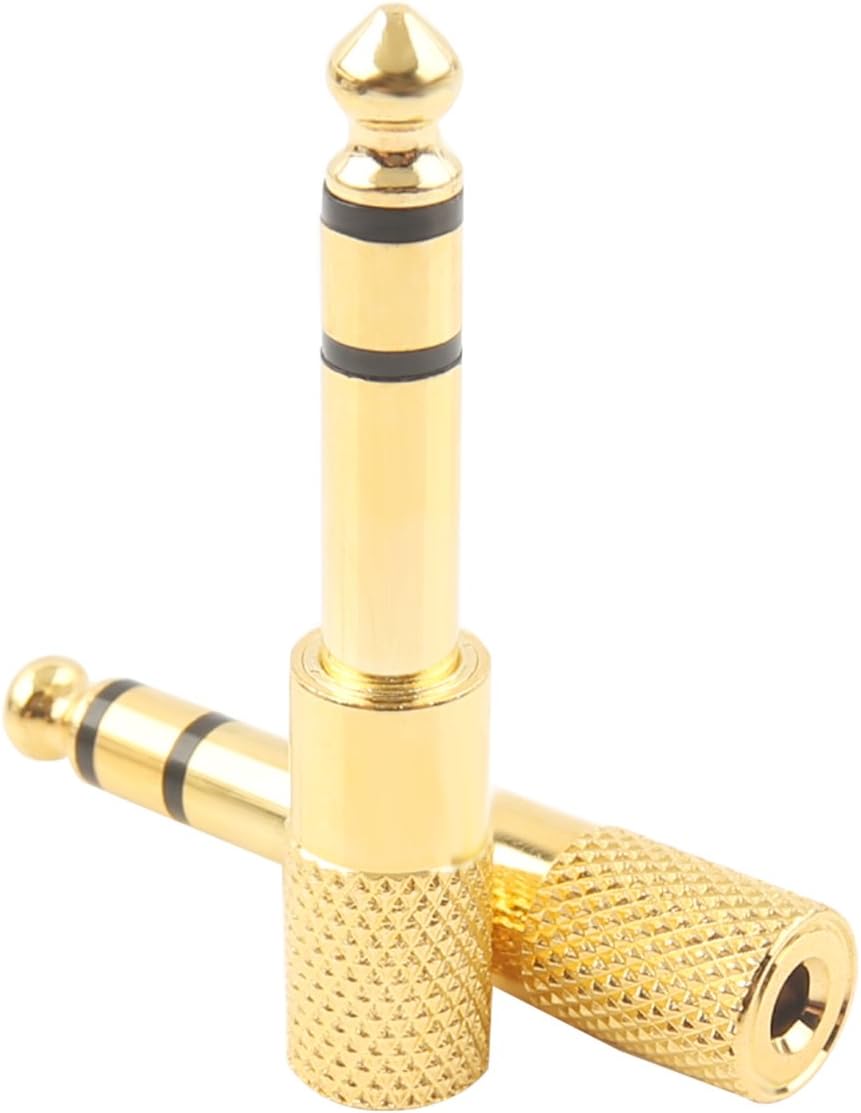 IMPORTANT PSA: Just because a headphone plug can fit into any given jack on an amp, doesn’t mean that you should or it’s safe to plug into it. A “power amp out” or “stereo out” jack, for example, will have many times more wattage than a headphone out jack and can easily destroy a pair of headphones.

Do I need a traditional box guitar amp to use headphones with an electric guitar or bass?

Nope! playing electric guitar through headphones without a regular guitar amp is actually really easy and inexpensive to do.

They make much smaller products that, while technically they’re still amplifiers, function more like a simple adapter that allows you to effectively plug your headphones right into your guitar. An added bonus is that they typically run for a fraction of the price of traditional guitar amps. 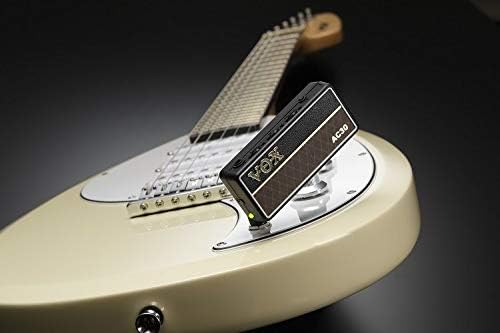 Is it possible to use wireless Bluetooth headphones with a guitar?

Cables can definitely be a nuisance if you’re trying to play a guitar with headphones, especially if you’re standing up and maybe moving around. It’s not uncommon for the guitar to pinch a cable on your body and tug on a pair of headphones.

Some guitar amps do have onboard Bluetooth, and it’s also possible to hook up a simple Bluetooth adapter to a traditional guitar amp, but the major issue with playing guitar (or any instrument really) is the latency. That is, a noticeable delay from when you play the note to when it actually hits your headphones. While Bluetooth latency has improved considerably in the last few years, and maybe it will one day become entirely negligible, the overwhelming consensus still seems to be that wireless latency is still significant enough to make playing an electric guitar with wireless headphones unfeasible.

Can you use headphones with an acoustic guitar?

You can if it has a quarter inch jack, but a lot of acoustic guitars don’t, and the ones that do are specialty instruments called electro-acoustic guitars which are primarily designed to be able to be amplified if the natural acoustic sound can’t get loud enough for the venue or whatever.

Keep in mind that even if you are using headphones with such an instrument, the natural acoustic volume of the guitar will still obviously be there all the same.

Is using headphones a good way to practice and learn how to play guitar?

Absolutely. It’s entirely possible, with a little tinkering perhaps, to make a guitar sound just as good coming into your headphones as it could coming out of a loudspeaker.

In fact, there’s a good chance it will make your practice better. One thing that beginners tend to do when playing electric guitar is to play too softly and timidly, perhaps because they’re self conscious of the less than perfect sounds that might come out of their traditional guitar amp speaker. But you really want to be able to pluck and finger with confidence, and to really learn to lean into your instrument and not be afraid of unleashing the sounds that come out of it as a result. Headphones can definitely help anyone do that.