Skip to content
Quick Answer: no – we haven’t seen any sound arguments with corroborating evidence that support the idea being worthwhile. Most popular modern speakers cannot be bi-wired anyhow. Sometimes bi-wiring can seemingly improve sound because it inadvertently works around an issue that can be fixed to begin with.

Bi-wiring is yet another item on the long laundry list of speculative ideas in the audio world (that often come with an added price tag) that purportedly enhance sound quality enough to be worth implementing. What is bi-wiring exactly? Basically it means to run two wires from the receiver/amplifier to each positive and negative speaker terminal. Like so:

You can see, obviously, that this speaker has four terminals – one pair for the tweeter, the other for the woofer. The back panel would look something like this:

back panel of the popular Jamo S 803s (affiliate link)

Most modern popular bookshelf speakers, even among the more expensive HiFi ones, don’t have four terminals, only two. Speakers that only have two terminals – a single positive/negative (red/black) connection – cannot be bi-wired or bi-amped. You could technically run two wires from a single terminal on your receiver/amp to the corresponding single terminal on your speaker, but that would be like dividing a river into two and rejoining it a mile downstream – that’s obviously moot and nonsensical. 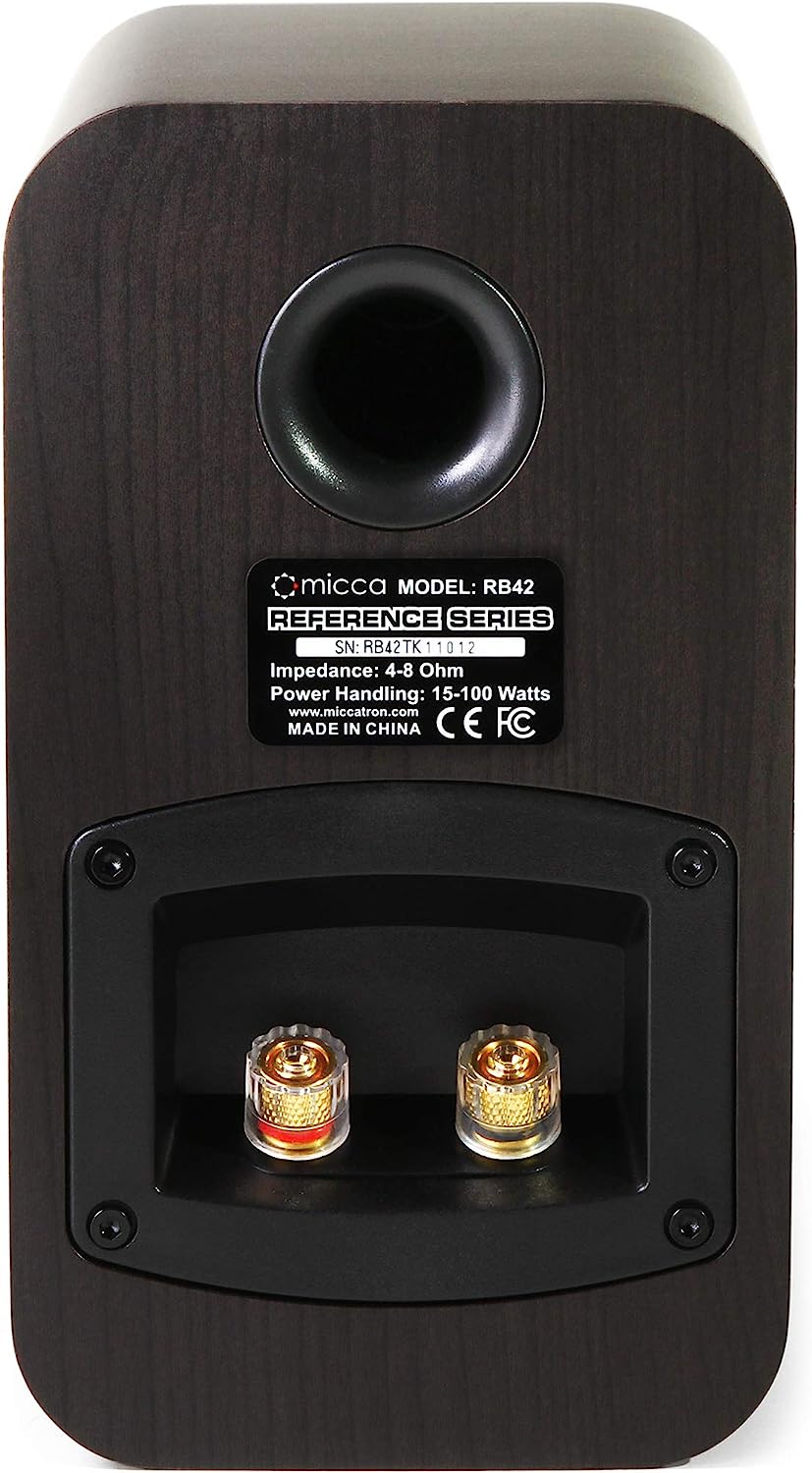 back panel of the popular Micca RB 42s. Most bookshelf speakers look/work like this. (affiliate link)

So what about the popularly purported claims as to why bi-wiring can improve sound quality?

Seemingly pervasive claim #1: bi-wiring doubles the amount of cable, which reduces the overall impedance, which can improve the signal quality, which ultimately improves the sound.

This assumes that cable impedance is an issue to begin with, which there’s a 99% chance it isn’t unless you’re using cable that is for some reason really old, crappy, thin (e.g. high gauge), or damaged. Increasing impedance with an extra cable is like adding a parallel road to an existing road that never experiences traffic jams – that makes no sense.

That’s just not how a line level electrical signal coming out of an amp/receiver works at all. High and low frequencies do not travel along speaker wire “separately.” A line level analog signal is, technically speaking, a singular periodic function. Once inside the speaker, the signal is split in two (but is still the same on each new path) then the lows and highs are filtered out of each with a capacitor and coil then sent to the tweeter and woofer respectively.

You cannot “skip” the crossover inside a speaker nor would doing so ever make sense. All that bi-wiring does is send the same signal to the speaker two times.

What about Bi-Amping Vs Bi-Wiring?

Bi-amping is distinctly different from bi-wiring in that you’re using two separate amplifiers to send two different signals to the tweeter and woofer of a speaker. There is actually arguable merit in bi-amping a compatible speaker, but, odds are almost certain that the modest bookshelf speaker you’re looking at won’t benefit from it and that you’ll introduce new issues that will actually make the sound worse.

In fact, James Larsen over at Audioholics says that putting dual binding posts on non elite/massive/ultra-expensive speakers is a trend that needs to end.

So why do loudspeaker manufacturers put dual-binding posts in speakers that do not realistically benefit from it? The answer is that it makes the speaker seem fancier and it’s cheap to do … Dual binding posts are more often a means of screwing up the set up of a speaker system rather than an opportunity [to improve] the sound. (source)

How should I connect speakers with 4 terminals to a single amp/receiver then?

The simplest and easiest way is to use what are called jumper cables, which are basically very short speaker wires that simply bridge a connection between the respective positive/negative terminals. Most decent speakers with four terminals will come included with them or something similar. Here’s a generic jumper cable with spade connectors for example: 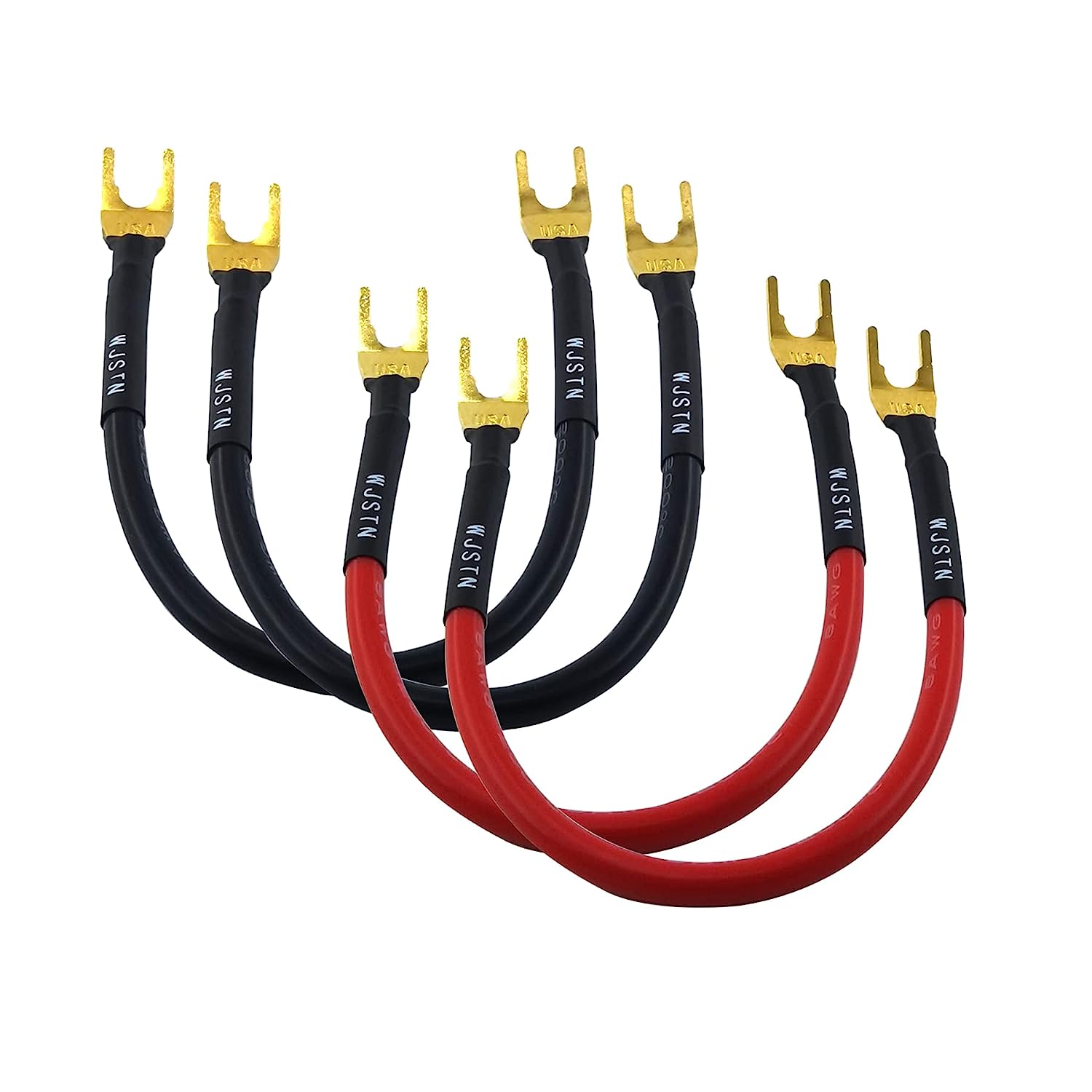 You could alternatively just use short sections of regular speaker wire to get the job done, but that might be a bit of a pain.

But, coming back to the main question at hand and in conclusion: insofar as bi-wiring is concerned, there’s no actual scientifically substantiated or even logical argument that bi-wiring speakers will improve anything in any appreciable way. Most modern popular bookshelf speakers only have two connection terminals and thus cannot be bi-wired to begin with, so the question is moot for most people in most cases anyhow.