Skip to content
Bottom Line: somewhat dated, but still very strong and performant powered monitors for a competitive price, definitely up there with the top-tier. They look slick and ahead of their time, which is unusual for Yamaha speakers. Warranty is also better than average. 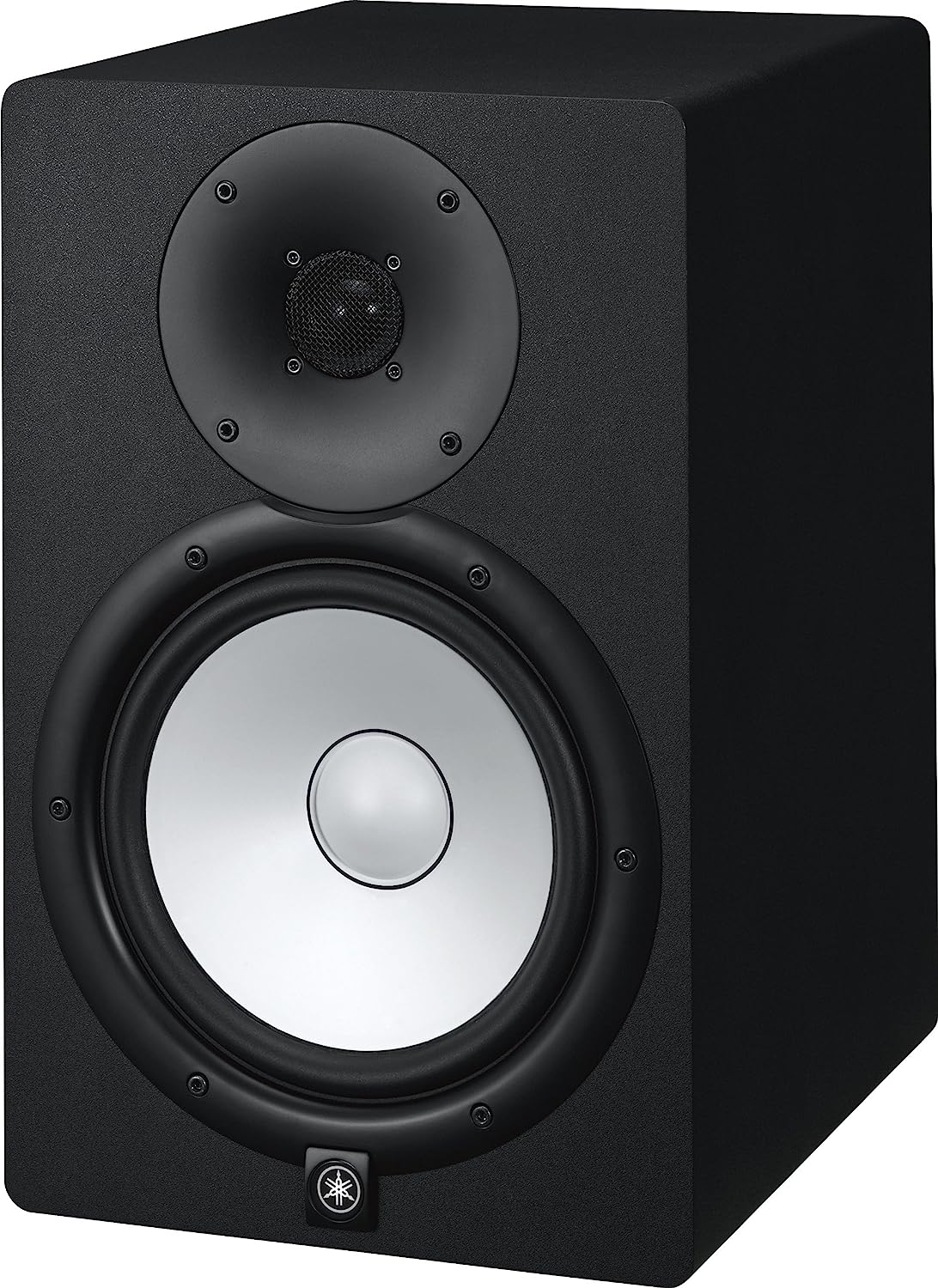 Yamaha’s HS series is a lineup of powered speakers that has been popular for several years now and is still highly regarded. They’re listed in their professional catalog, but like many other “pro” speakers they’re perfectly suitable for non-commercial use at home.

The lineup consists of three different bookshelf speakers vary in size and power but otherwise have the same design, hence a cumulative review herein.

Yamaha has never really been known for making the best looking speakers. They tend to look dated, often because they actually are dated – some of the stuff they still produce and sell is well over fifteen years old. Yet the HS speakers look unusually slick for Yamaha speakers, and we dare say even ahead of their time from when they originally came out. The non-sheen minimalistic cabinets and overlapping baskets look quite similar to some of the recent and popular Elac speakers, for example.

The cabinet itself is MDF all around, pretty standard issue. Each size also comes in an entirely separate model (with an appending “I”) if you want a cabinet that has mounting holes on it, but it’s slightly more expensive. They’ll otherwise have to rest on a surface or speaker stands.

Now lets get into the meat of the speaker. The HS bookshelf use a bi-amp design, meaning two separate amplifiers power the tweeter and woofer respectively. The cumulative power handling allows each of these speakers to get quite loud for their size. While most powered speakers are mainly intended for near-field use on a desktop, any of the HS speakers could easily fill a full sized room.

The response range on these is also excellent, in particular the largest HS8 since it has a very large 8 inch woofer, which is the same size as many entry level dedicated subwoofers. The 3 and 10 dB response ranges are just about best we’ve seen among powered bookshelf speakers, the only competitor that’s comparable are the next generation 3 series speakers from JBL, which are widely regarded as the best powered bookshelf speakers ever. But they’re also bigger than the HS speakers, though slightly lighter.

Yamaha doesn’t disclose the specifics of the tweeter and woofer materials, but they certainly look nice. The tweeter looks like a fairly standard one inch silk dome while the woofers appear to be some kind of rubber polymer. They have Yamaha’s signature white/black combo, kind of like Klipsch has their signature copper/ebony combo. 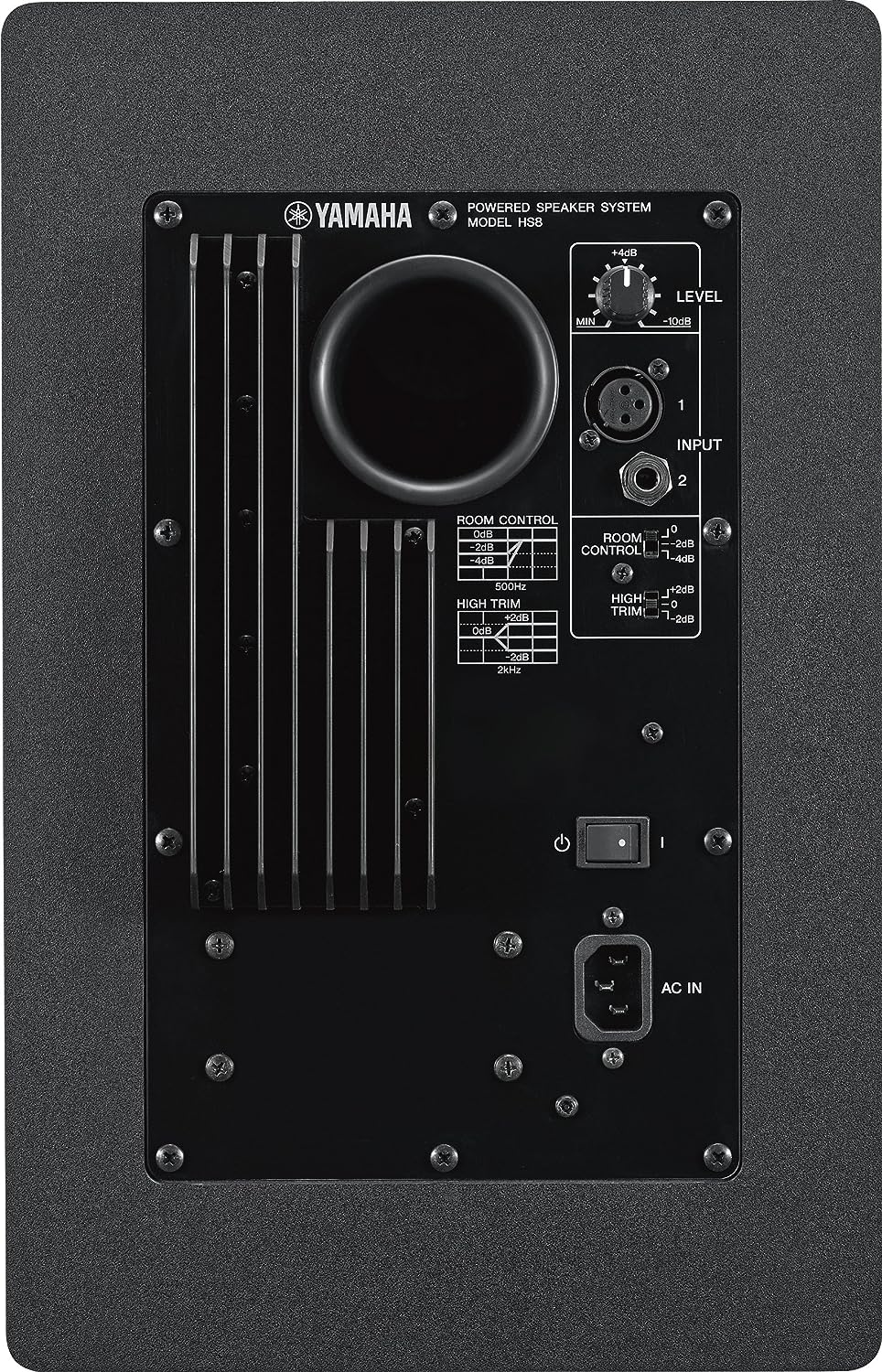 The HS speakers come with just about every input you could need, including a line-out for a subwoofer, and there is indeed a subwoofer in said HS series. Beyond that, they also have multiple EQ controls that befit a true studio monitor. Even if you’re not using this in a professional recording/mixing environment, the extra knobs can still really allow you to get the sound just right for the room.

Yamaha offers a two year warranty on its speakers across the board. While that’s fairly minimal for a passive speaker, it’s quite good coverage for a powered speaker that includes active electronics where you’re normally lucky to get 1 year or more of coverage.

These speakers run on the expensive side for powered monitors, but are still very competitively priced. They’re not as cheap as JBL’s highly regarded newer generation series 3 powered monitors (reviewed here), but they’re close.

Because the HS monitors are a bit dated now, we wouldn’t be surprised if you could get a deal on them intermittently. Or they might be worth the slight premium if you like how they sound better. JBLs are great but can be very forward and boomy, for lack of a better way to describe it. Between these, the JBLs, and the more compact PreSonus Eris (reviewed here) or Audioengine A5+ (reviewed here), the best choice will honestly probably whatever’s the best deal at the time.

Keep in mind these and other higher tier monitors are usually sold as singles, in which case you’ll have to get two separately for a complete pair.

Get the HS Series powered speakers on Amazon (affiliate link)