Skip to content
Bottom Line: really nice cabinet, solid specs with actual graphs to substatiate the response range. Minimal inputs, but the upgraded plus version adds just about everything you’d need. They’re heavy and quite deep, might be hard to place on a desktop. Warranty policies also seem to be precarious and dealer dependent, and definitely should be checked before purchase. 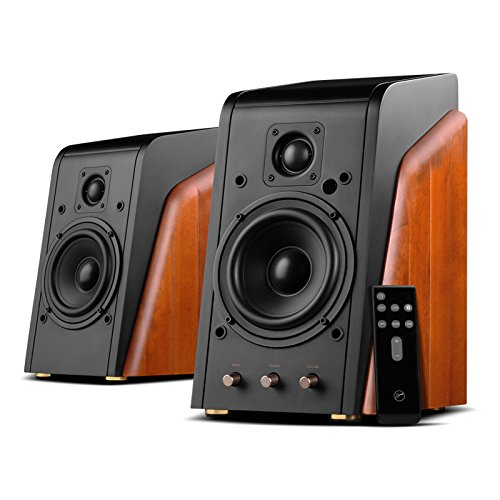 Swans speaker company has been making recent waves for their production of, according to many, great sounding and highly performant powered speakers in particular, enough so that we decided to give one of their popular sellers a look. Enter the third generation M200MKIII 2.0, an unabashedly unconventional looking bookshelf speaker that is quite different from the norm of plain looking box shaped bookshelf speakers.

The M200MK is a powered speaker, meaning you don’t need an amp or a receiver – you can just plug them into the wall and your device and they’re ready to go out of the box.

Not only do they look slick, the upward angle of the baffle helps aim the sweet spot right at the head of the theoretically sitting user where it needs to be. This is a nice feature that is surprisingly still uncommon, and users are often forced to prop up horizontally firing speakers in order to optimally position them.

While the black part of the cabinet looks to be fairly standard MDF pieces, it’s actually housed in outer panels that are actual wood. Generally speaking, the thicker and sturdier a cabinet is the better, as it becomes less prone to unwanted resonance. Actual wood is not something you commonly see on non-expensive speakers anymore.

The speaker is propped up on four built in circular stands to give it some default separation, which is nice.

The tweeter is a one inch silk dome embedded in a slight wave guide, and while they don’t specify the woofer materials, it looks like a 5.25 inch polymer cone with a rubber dust cap. Fairly standard driver materials.

These speakers are rated at 60 W continuous power handling per channel with an 87 sensitivity rating (which they interestingly disclose along with impedance, which isn’t common for powered speakers). All a layperson needs to know is these can get plenty loud, and while they seem to be geared towards desktop listening, they’d certainly suffice in just about any non-large room as satellite speakers.

One thing that Swans does that we’ve only seen one other company so far do (Fluance) is actually publish graphs to substantiate their quoted response range. While internal data obviously must be taken with a grain of salt, this is still a great act of transparency. They are very consistent from high to low, although you’ll see some drop off before the quoted floor of 53 Hz. But that’s honestly to be expected in any two way bookshelf speaker. One nice additional feature that might help with that and overall consistency even more are the +/-3 dB tweeter and woofer EQ knobs on the front – you can adjust the treble or bass to help balance the sound as you see fit.

The only real downside of these speakers is that the only input is RCA, so there’s no way to add a subwoofer on. However, there’s an upgraded model of these same exact speaker, the M200MKIII plus, which has dual RCA, Bluetooth, and an added optical and coaxial input (which you can plug a subwoofer into), and it’s not that much more expensive. The slight premium is definitely worth all that added compatibility, and the original M200MKIII appears to be out of stock at the time of this writing anyhow.

The M200MK bookshelf speakers are pretty big and heavy. The parent/child weigh about 12/17 pounds respectively, and while they’re not too tall, they’re very deep at 13 inches, and they’ll additionally need room in the back for the ports to breathe. So, near-field desktop placement might be a bit of a challenge for some. There are certainly more compact alternatives available that are really designed to save space and might be a better fit for you – check out the links at the end for some such alternative recommendations.

The warranty policy of Swans isn’t currently all that clear. On one page they say they offer one year, which is pretty bare minimum, while in other places they say they defer warranty to secondary dealers or distributors, which is something that international manufacturers sometimes do. Make sure the warranty from where you choose to buy from is decent enough, a year at a minimum, though we’d say 2-3 years would be more competitive.

These speakers have a really nice cabinet design that’s well suited for desktop listening, and the power and range specs are also quite good, and they have transparent graphs to back them up. They are quite big and heavy though, and might have a hard time fitting on a near-field desktop. We definitely recommend opting for the slightly more expensive plus model for all the added inputs, mainly so that you get the option to add a subwoofer if you want to.