Coming into the 2018 summer season, we’ve noticed that the Sonos Connect Amplifier is, interestingly, a highly popular product that’s often looked at or purchased in conjunction with outdoor speakers. What makes it so popular? Is it actually a good choice to use as an amplifier/receiver to power outdoor speakers? We’re answering that in a full product review here. 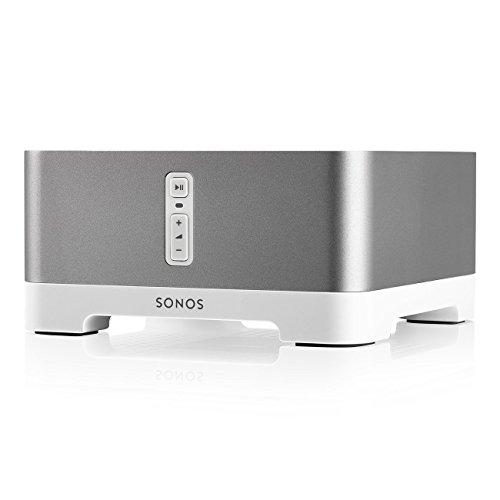 This unit advertises itself as a sort of all in one “stream everything” solution – it comes with it’s own App, which can integrate with just about every app or platform you can think of, and it’s designed to make playing music from your speakers as easy and convenient as possible.

Firstly: it probably doesn’t need to be said, but… don’t let nice looking pictures fool you into thinking that this unit can wirelessly *power* a set of passive outdoor speakers – that would be amazing yes, but technology isn’t quite there yet, so you’ll have to wire up a pair of speakers just the same as you would with any other receiver or amplifier on the market. See our full guide on wiring outdoor speakers for more information. 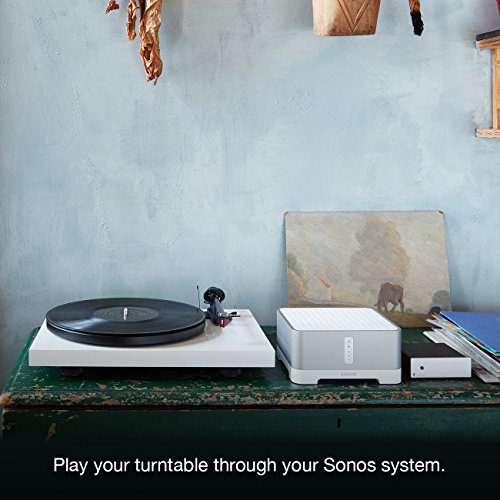 Yes, you’ll still need speaker wire to connect the amp to your speakers, even though you can’t see that in this very nice looking room

Let’s talk specs: The Sonos Connect Amp is a fairly basic two channel receiver/amplifier, meaning it can essentially power a single pair of outdoor speakers – this should be sufficient for most people, as it’s not often necessary for someone to have an additional subwoofer or more than two outdoor speakers. If you do plan on using more than two speakers though, you’ll need either an additional one of these or a different product with more channels.

The channels are rated at 55 Watts per with a THD (total harmonic distortion) rating of less than 0.02 percent. While the THD rating is excellent, a two channel 110 W total receiver is just not all that great for the price. That we’d say is our biggest reservation – it’s hard to recommend the Sonos over something like the popular Yamaha R-S202, a similar two channel receiver that’s actually significantly more powerful at 100W per channel (200W total) but retails for around a third of the price. The THD rating of the Yamaha is actually significantly worse (and arguably a deal breaker by some) at 0.2 percent, so is the sound quality going to be better coming from the Sonos? Eh… maybe – the importance of the THD spec, and to what degree the human ear can even detect distortion, is pretty debatable. Also of concern is that a mere 55 W per channel might not be enough to adequately power some of the popular higher end outdoor speakers such as the Klipsch AW650s or Definite Technology 6500s, both of which are longstanding customer favorites.

The other limitation of the Sonos Connect Amp is that it can only power a single pair of speakers, and yes we did say that this isn’t bad per say and that most people won’t ever need more than a single pair of outdoor speakers, but, the issue again is the price you’re paying for it in this case. For a similar middle three figure sum, you can alternatively get a full fledged 7.2 channel receiver that would be able to power several outdoor speakers or both your indoor home theater system and outdoor speakers.

You might be thinking though: But what about all the cool wireless streaming? Well, both the Yamaha, Sony, and just about every other modern receiver can do that too with Bluetooth pairing – you can just as easily play music to either of those with a smart phone, tablet, or whatever. They might not look quite as slick, but we don’t care too much about aesthetics, and most value-minded people don’t either.

The major pro of the Sonos is the all-in-one nature of the entire lineup of Sonos products – for example, it makes it easy to manage music in different rooms with different speakers all from the same source with their app on it. It looks slick too, we’ll definitely give it that. If either of those is primarily appealing and you and don’t mind paying a premium? This can definitely be a solid choice. But the main issue is similar to that of Bose products – they look great and sound great, sure, but you can get the same power and quality with other brands for a lot less money (or spend the same money to get more power of course). Makes it hard to justify this one, especially when there are good receivers with more channels available in the same price range that will give you the option to add more speakers if you wanted to.

Get the Sonos Connect: Amp on Amazon