Update: The HW-M360 / ZA 2.1 appears to have been discontinued. You can check out our best-of page for alternative recommendations.

Bottom Line: a decently priced basic 2.1 soundbar system that will sufficiently augment crummy default TV speakers. Pretty much on par with several competitors in the same price range, best choice will often come down to the best deal at the time. 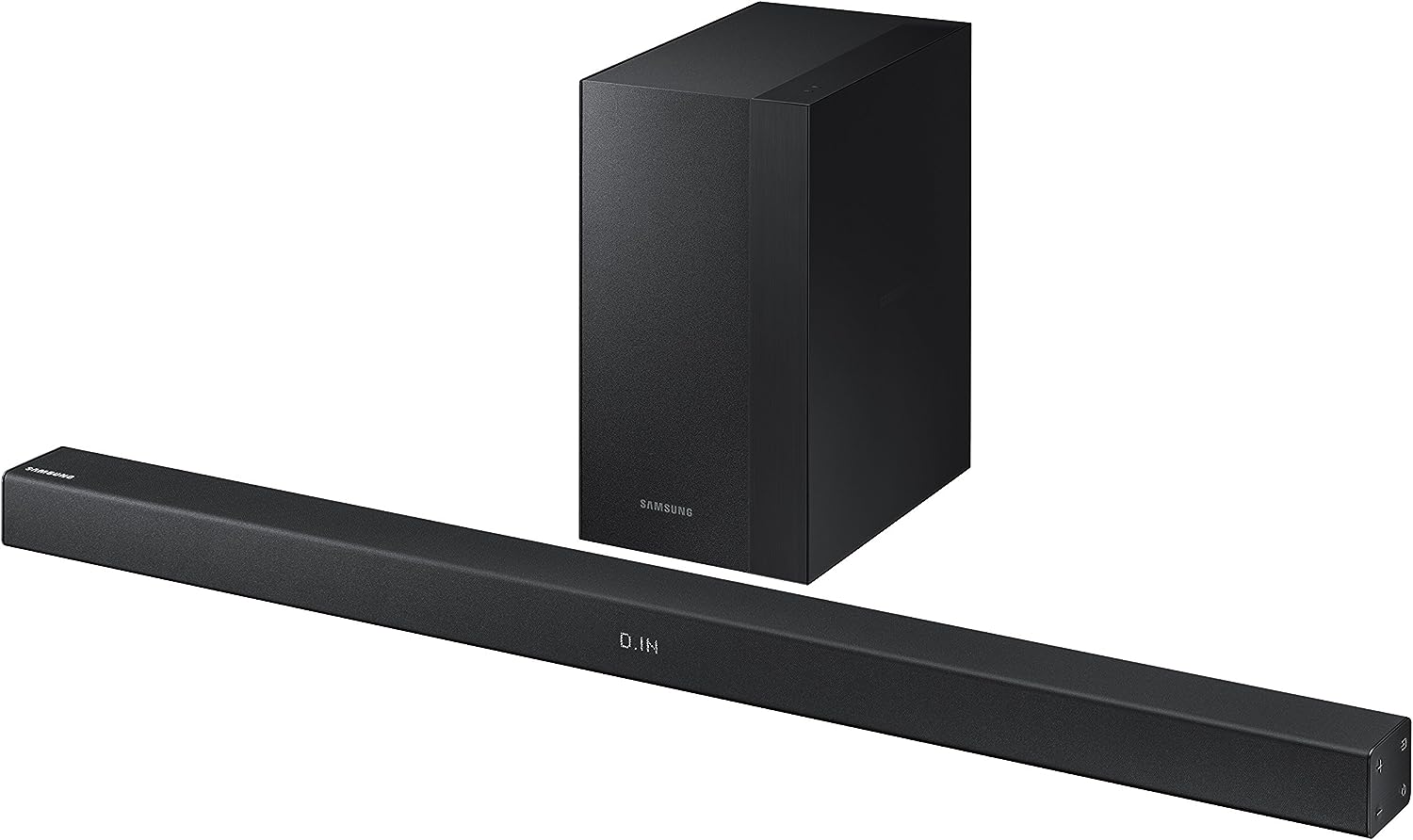 Samsung has, relatively recently, delved into the burgeoning sound bar market and produced a wide variety of budget to high end soundbar systems of their own. The HW-M360 / ZA is their lowest priced entry level 2.1 soundbar system, meaning it includes a compatible but separate subwoofer.

The result is a decently powered and nice looking sound system that’s an easy, all inclusive, right out of the box way to augment default TV speakers, which nowadays are generally tiny and insufficient. The main advantage of sound bars are that they look nice, easily fit above or below a TV, and don’t require any ancillary equipment like receivers or speaker wires. All necessary connection cables come included. Also included is the mounting hardware if you want to wall mount it.

The 200 W power spec is a bit misleading since it’s the sum total peak power of the combined 2 channel soundbar and subwoofer, when in reality the continuous power handing (meaning what speakers can output over the long run rather than in intermittent short bursts) is generally around 30-40% of peak power handling. Samsung doesn’t specify continuous vs peak power, nor max output in decibels, but the power specs are decent for the price and the system definitely competes with similarly priced competitors.

External subwoofers are a nice edition to any soundbar system mainly because a 2 channel soundbar with tiny drivers and single crossover just isn’t going to be capable of reproducing decent bass. That might be fine if all you’re doing is ambient listening to sports, talk shows, or whatever, but it will quickly fall short for any kind of immersive movie or music listening. The specs of the ZA subwoofer are pretty decent: a 43 Hz floor with a ~130 W peak power handling, fairly close to on par with what you’d get with an actual budget subwoofer sold separately.

One downside of Samsung’s 360 soundbar model is no HDMI connection which might make compatibility with some TVs an issue. The next level and slightly more expensive 450 model (reviewed here) does have HDMI though.

The system comes with a remote or is operable via Bluetooth. Samsung has its own apps that integrate with just about all its devices. The look is pretty plain but slick in an understated way. The subwoofer might be a bit bulky, but that can be off placed somewhere out of the way and still function perfectly fine. Samsung offers a 1 year warranty, which is pretty bare minimum but fairly standard among budget-tier soundbar systems.

Really the main goal with any budget soundbar system is that it can get loud enough and it has all the basic features that you need, and the HW-M360 would certainly satisfy both of those for many. Truth is there are a lot of decent, similarly specced budget-tier soundbar systems and there’s not going to be too much difference between them – your best bet generally is to just snag the best deal at the time.

We wouldn’t recommend spending more than a few hundred bucks on a sound bar though, mainly because at that point you can get far better value and performance with traditional passive speakers and a receiver, or even some nice powered speakers.