Skip to content
Bottom Line: great design and specs for a very competitive price. Also has additional EQ features that make it a studio monitor in the true sense. Might be the best choice at its current price point if it remains as cheap as it currently is. Warranty is fairly minimal. 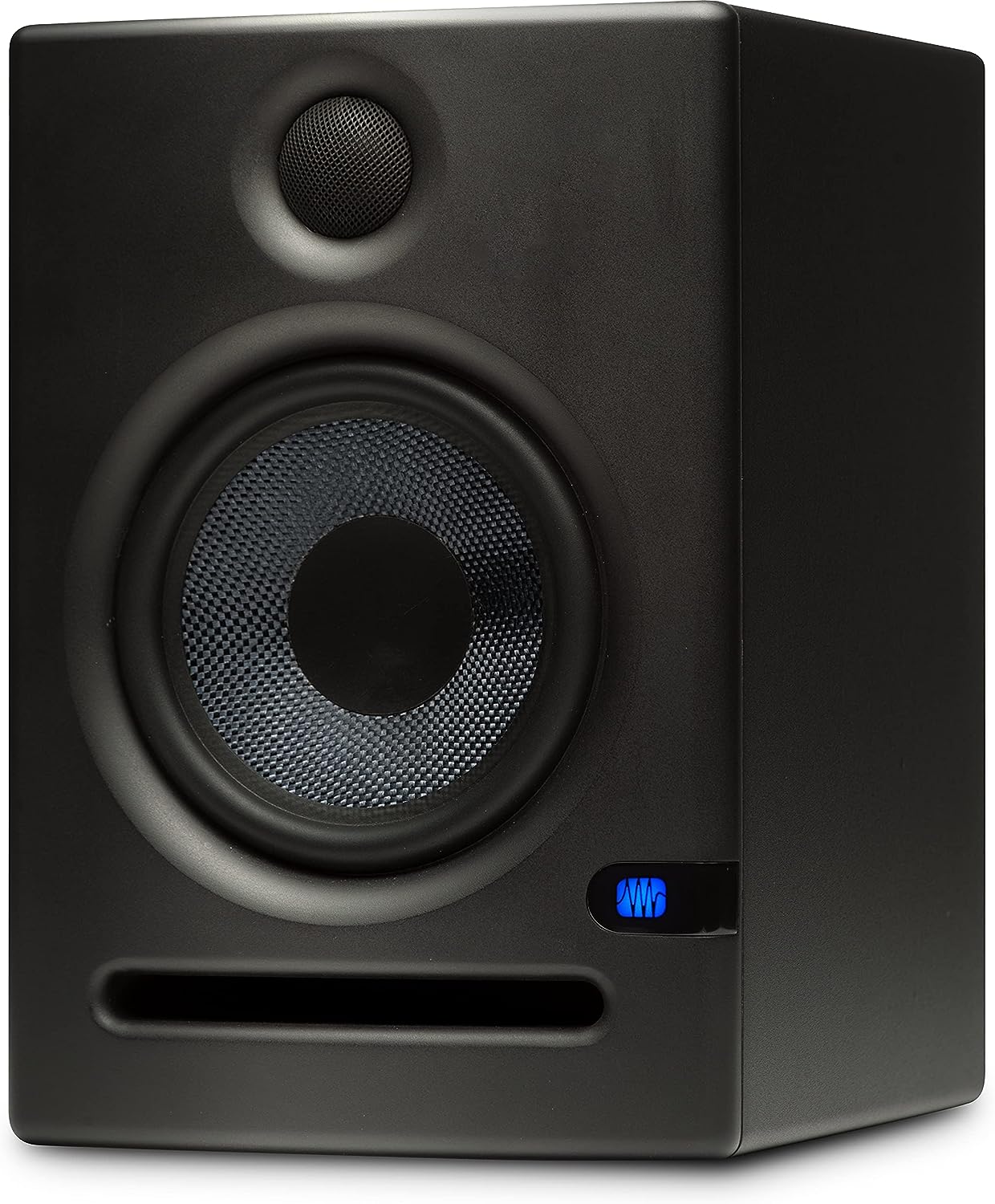 PreSonus is a newer American audio company that mainly produces studio equipment, and the Eris powered speaker lineup are indeed marketed as studio monitors. While the “monitor” descriptor has been muddied down with marketing in recent years, it traditionally meant the speaker was intended to evenly reproduce sound in any environment, rather than “color” it to a listener’s preferences or otherwise, the idea being to be able to effectively mix and work with an audio track in a recording/studio setting.

But in any case, a good studio monitor can certainly serve as a consumer bookshelf speaker. The E5, which we’re reviewing herein, is the second largest of four different sized bookshelf speakers in the Eris lineup. It and the largest E8 are actually bi-amped, meaning two separate amplifiers supply power to the tweeters and woofers respectively.

The result of this design are specs that are quite impressive for a relatively small and modest looking speaker. A powered speaker that can get above 100 dB at close range is plenty loud to fill just about any room that isn’t unusually large. The response range is decent too, and about as good as it gets for a powered bookshelf speaker that’s as cheap as these are going for now. The crossover point is on the high side, and because PreSonus doesn’t specify a variance on the response curve (3 dB is generally standard), it’s not unfair to assume a single 5.25 inch woofer will experience some drop off before the quoted 53 Hz floor. The question is how much, and that would take a lot of testing iterations to truly determine. 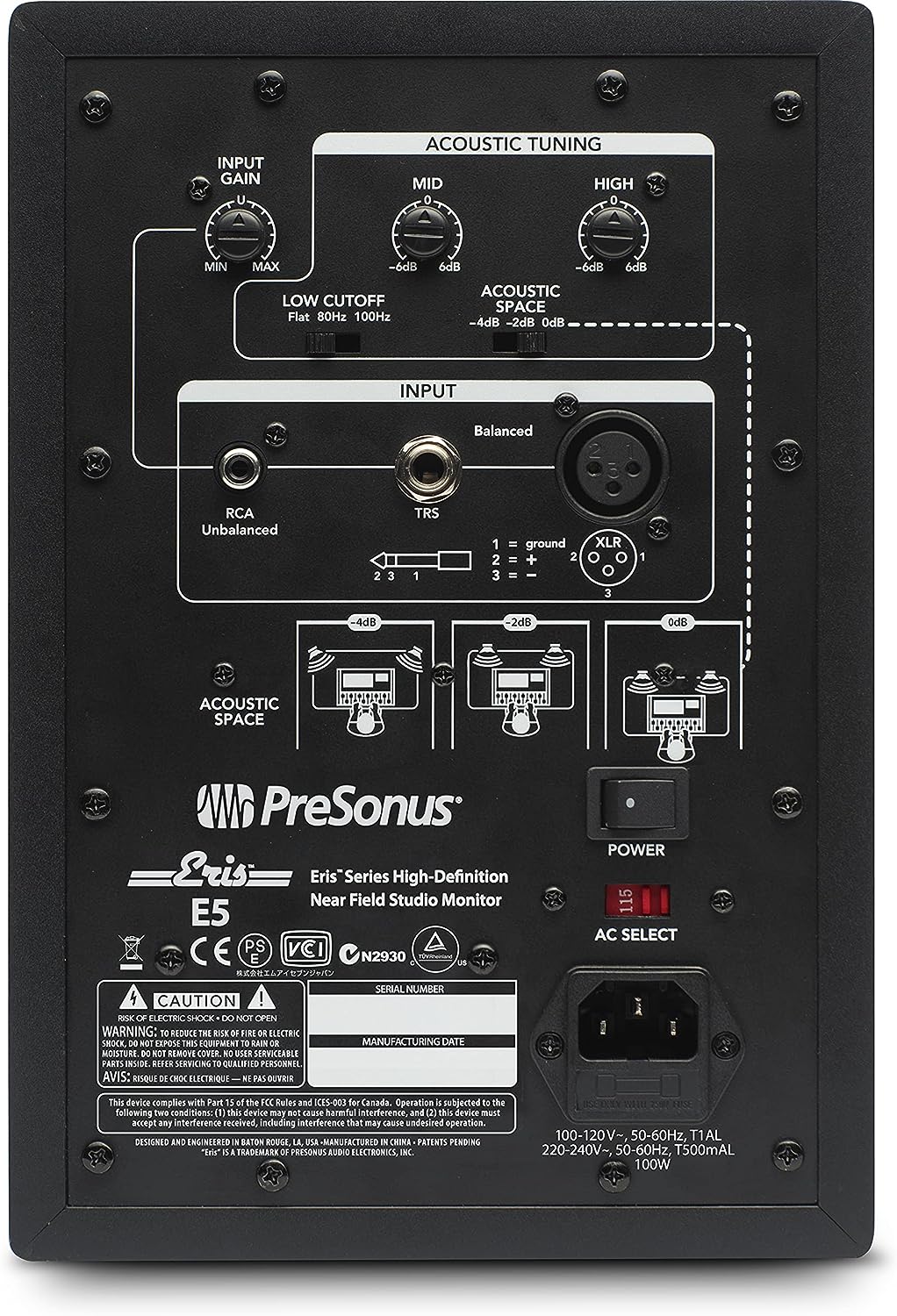 That said, both the E5 and E8 have inputs compatible with subwoofers, which is not something you normally see on cheaper powered speakers. Adding a subwoofer to two way speakers is generally a good idea, and if you do, the potential response floor issue becomes irrelevant. But the E5 (and certainly the larger E8) might suffice on their own for some people.

The tweeter is a relatively standard 1 inch silk dome that’s slightly embedded in the cabinet, and actually covered with a metallic grill. The woofer is an also relatively standard woven/cloth blend. The cabinet is pretty boilerplate looking MDF all around. Interestingly these speakers have the same rounded edges and slit shaped ports that Audioengine’s popular powered speakers have – it’s a neat way to save space while still having ports which mainly help with bass.

As we said the E5 is quite compact, and front firing ports make it as easy to place as can be since you don’t need to worry about them breathing in the back. The speakers don’t have covers so you’ll have to be careful that the woofers won’t get touched or otherwise damaged. The Eris lineup has a 1 year warranty which is pretty minimal, but fairly standard for budget-tier powered speakers

These speakers could easily be more expensive than they are. Additionally, the entire line up has been significantly discounted from the MSRP, making any of them very strong competitors in the budget powered speakers category. Beyond that, it has some nice EQ features that befit a true studio monitor. As long as it remains as cheap as it currently is, this will almost certainly earn a spot on our relevant best of list. The only real downside is the fairly minimal one year warranty.