Skip to content
Bottom Line: hard to ever go wrong with a Polk loudspeaker. They look really cool for a non high-end price tier. Are comparatively expensive for what you get spec wise, probably mostly due to them still being pretty new. Best suited for near-field listening, but will likely be under powered in a home theater set up. 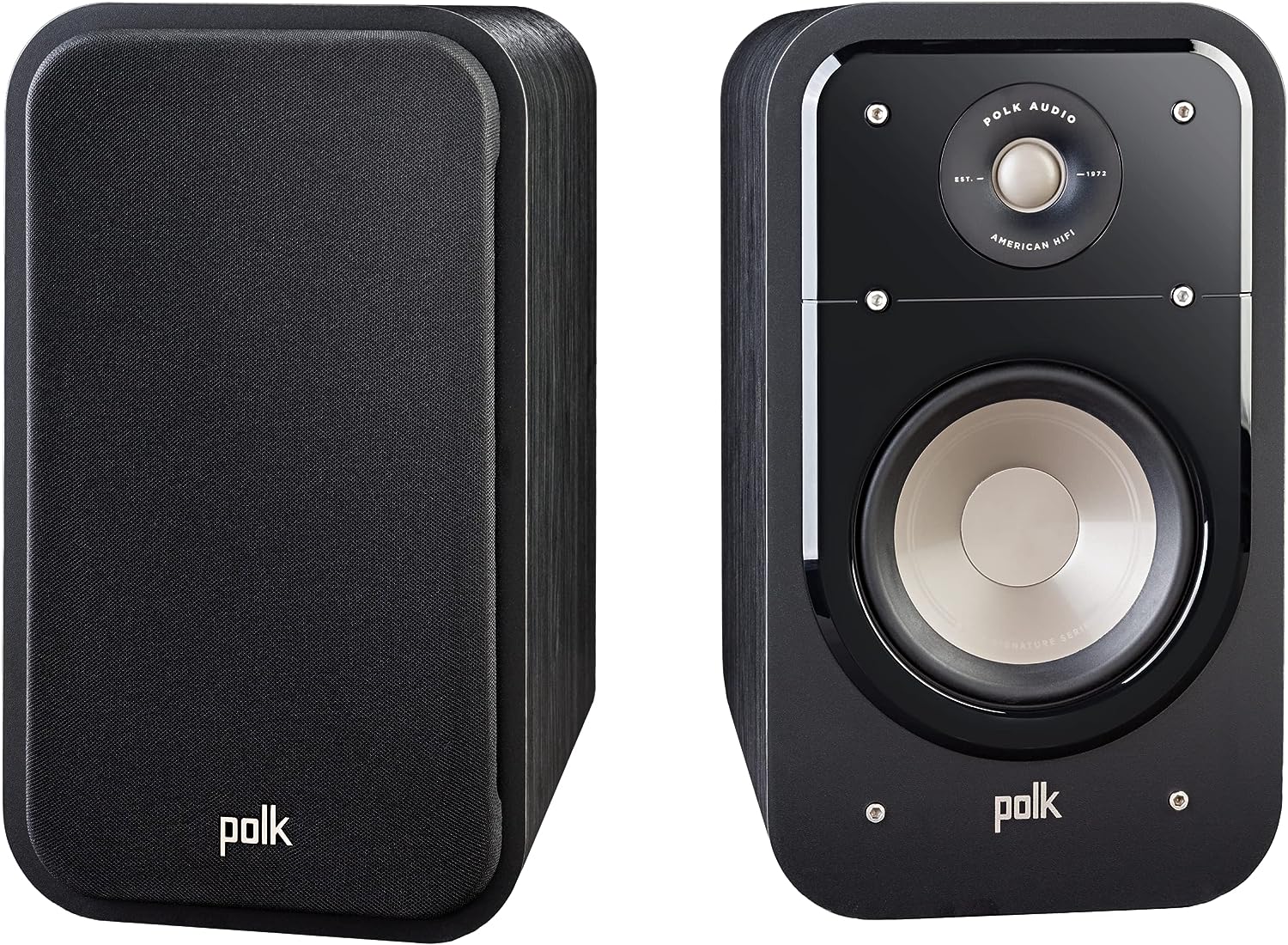 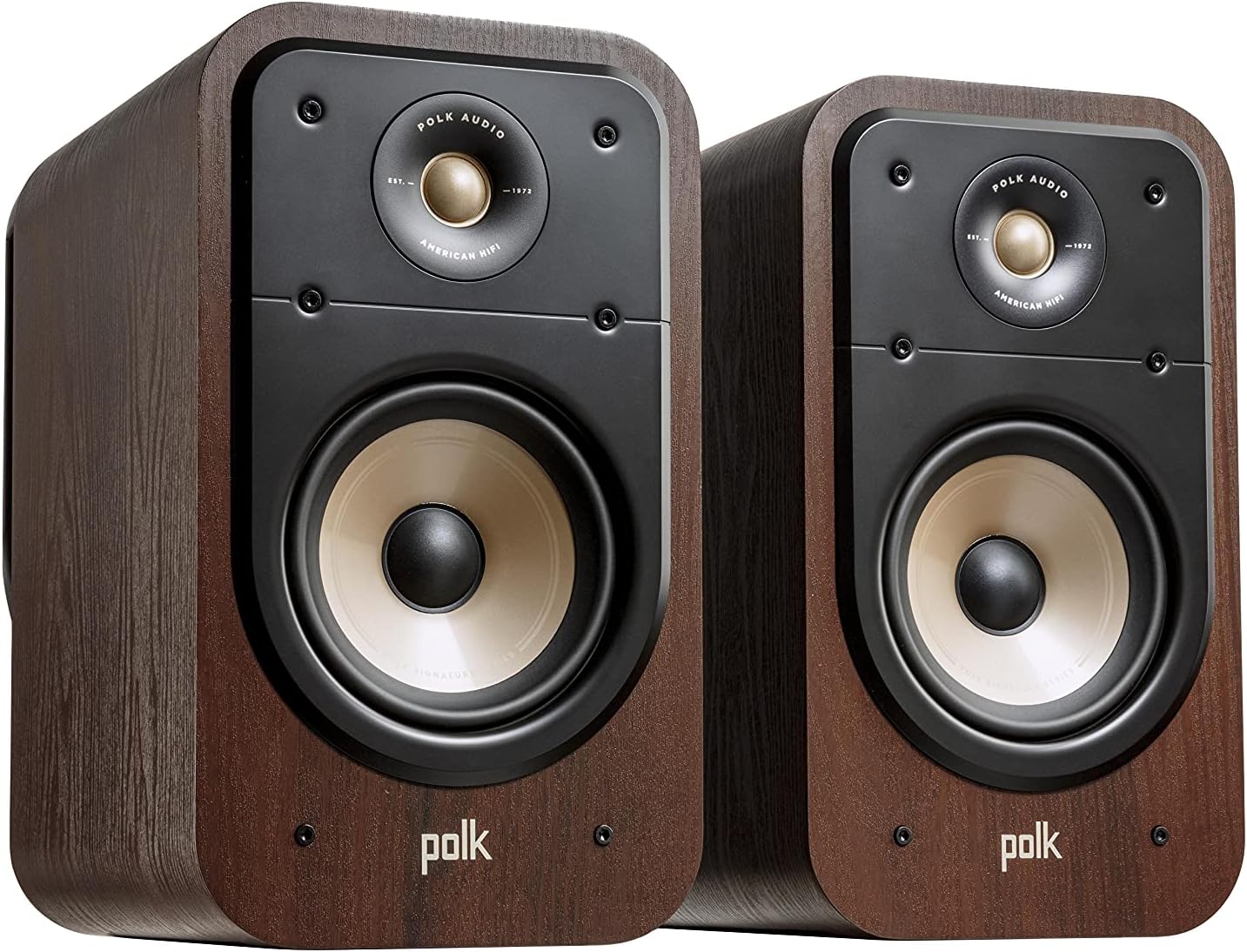 in the black/brown colors, click to see zoomable images on Amazon (affiliate links)

Polk originally made its name with non-professionally affordable HiFi quality speakers, and that continues to be its main focus now decades later, also with a keen focus on aesthetics. They have several complete lineups of residential grade speaker systems, and the newer Signature Series is one of them, which features a particularly slick retro-future design that distinguishes itself from the generally plain and homogeneous look of budget-tier speakers.

The lineup includes two bookshelf speaker variants, the full sized S20 and the dubbed “compact” S15 – the former is larger and slightly more powerful than the latter, but they otherwise have the same build and design, hence our review of both of them together.

The power specs of each are about on par with what you’d get with near-field bookshelf speakers – perfectly fine for medium volume, but will likely under perform in a full fledged home theater setting. The response floor is actually pretty decent, especially that of the larger S20. But even so – a standard 2 way bookshelf speaker will generally be lacking in bass, because they’re not really designed for all around sound, and rather do best when paired with a subwoofer. Polk’s HTS subwoofers (reviewed here) in fact use the same retro-future design/build as the Signature series.

The design is really cool, that’s one thing we really like about these, and it’s nice to have such an aesthetic option in the non high-end price range. You can use the front cover, or leave the drivers exposed, which really do look quite slick in contrast to the sheen front panel and washed-wood MDF cabinet.

Polk offers 5 years of warranty coverage on all it’s passive speakers, which is pretty top of the line.

It’s hard to ever go wrong with a Polk home theater speaker, and if you’re looking for a pair of near-field bookshelf speakers and like something that looks really cool, then either of the Signature Series is a perfectly solid choice.

Having said that, we’re generally not a fan of under powered passive home theater speakers because they tend to fall short on their intended purpose. The Signature Series is also rather expensive for what you get, but that’s generally the case with newer speakers – the best choice for speakers often ends up being 5 plus years old because they don’t depreciate like most consumer electronics do, yet they’ll still get significantly discounted from the MSRP. But maybe the nice look is worth the slight premium to you – nothing wrong with that.

The also popular Klipsch R-15M bookshelf speakers (reviewed here), though they have a higher response floor, have almost triple the power of the S20s and cost about the same price. These are how you’d expect home theater bookshelf speakers to be really optimized for the mids and highs while in conjunction with a subwoofer (2.1 is the most common entry level set up). Now that’s not to say that louder speakers are unilaterally better – there’s no point in paying for power if you’re only listening at medium volume for example – but do understand that you’ll probably want it if you’re going for a home theater set up.

Do also note the Signature bookshelf speakers are passive. They’ll need a receiver, so if you’re looking for straight plug-in-and-play computer speakers, for example, these won’t work. You’ll need powered desktop speakers if that’s the kind of thing you’re after.