Skip to content
Bottom Line: an input and feature rich receiver that manages to stay as slim and compact as these things can get. A solid choice for those who need features/performance while saving space, but more expensive than comparable competition as a result.

Marantz is a longstanding niche brand in the audiophile community that specializes in amplifiers and receivers – they are known for making products that are both performant and aesthetically compact, and the NR150 “slim” receiver is an obvious continuation of that tradition.

The front interface panel has nice horizontal symmetry, with identical input selector and volume knobs, 6.35mm and 3.5mm headphone and mic jacks on the left side, and USB and HDMI out ports on the right side. Having those inputs on the front side is a nice feature, especially for those who are looking to make a slim/compact setup work.

The back panel has plenty of inputs, and manages to do a great job visually of being well laid out and and labeled despite having less space to work with. The HDMI ports might become a little crammed with the binding posts, and maybe some of the RCA inputs, but, all in all this looks nice, clean, and functional.

There are no less than six HDMI ports, which you always want to make sure you have enough of for any home theater system, with 4k and HDCP 2.2/2.3 support.

All the speaker terminals are 5 way binding posts, which is a nice feature that isn’t always present in budget-tier receivers, and are nicely labeled with color codes. It might seem redundant to the initiated, but having a back panel that makes it very clear where all the basic equipment should plug into is something audiophiles forget is really helpful to the less experienced majority.

The power specs are comparatively on the low side at 50 WPC, but this is likely a necessary concession to achieve the slim design, which at 4 inches of height they say is about half the height of the average bulkier receiver, and we’re inclined to agree there – even some of the popular modern budget 2 channel alternatives out there are heat expelling behemoths.

The back panel says the channels are rated for 4 -16 ohms, but, we wouldn’t recommend trying to connect a full set of 4 ohm speakers to this unit. Even a single pair of 4 ohm left/right main speakers should be done with caution.

A lot of manufacturers boast massive power specs, but, 50 WPC is honestly going to be plenty for like 90+ percent of peoples’ possible setups. You might run into volume issues if you are powering all five channels with lower sensitivity speakers (think a rating of high 80s or lower).

The NR1510 does have an RCA pre-out above the subwoofer terminals, which is another nice feature that isn’t always present on budget receivers, and what this allows for is to plug in a separate amplifier if you do need more power. You can dedicate the main left/right speakers to a separate amp and plug that into the RCA pre-out, then spare the built in amp to be fully dedicated to the surround channels.

Beyond that, the NR1510 has pretty much every input most people will ever need, including two dedicated pre-out powered subwoofer terminals, which is yet another nice budget-tier features if you ever feel like running dual subwoofers. 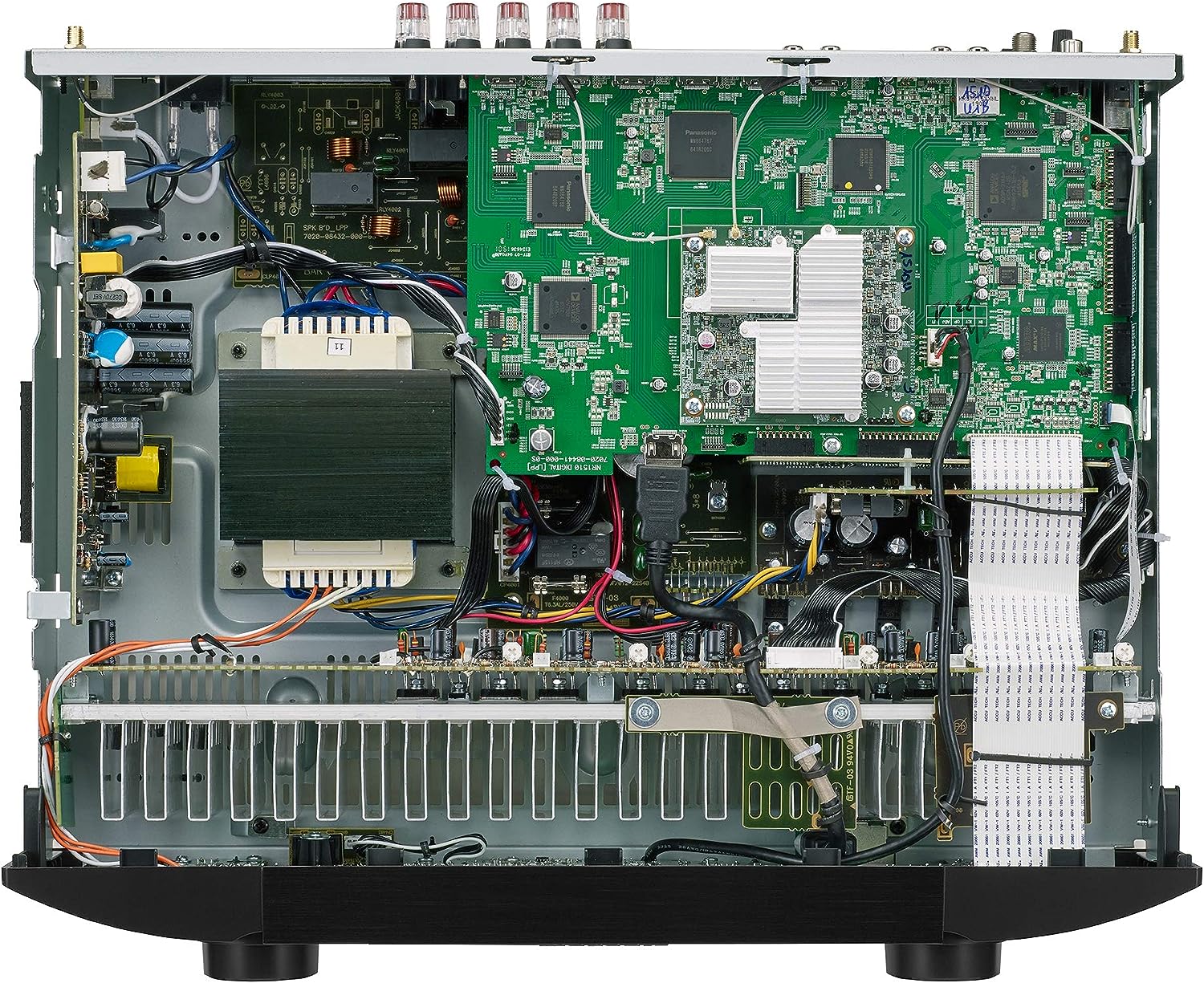 Heat displacement is of paramount importance for any amplifier based a/v equipment, especially when you’re trying to cram things together to achieve a slim/compact design. The guts of the NR1510 has a nice and spacious looking layout, and the top panel is nicely fully vented.

PSA: don’t ever put anything directly on top of your receiver, and give it at least a couple of inches to breathe!

Marantz makes good amplifiers and receivers, and many of them look real nice and slick too, which some people do care about. Related to that, the major advantage of the NR1510 is it’s minimal size and height while still having plenty of the inputs that people usually need.

The trade off though? Marantz equipment tends to be expensive, and the NR1510, at least for now, costs significantly more than a few different brand competitors that have the same features as well as more power per channel which some people might want or need.

If your priority is saving space and you like aesthetics, it’s hard to go wrong with a Marantz receiver, and the NR1510 is a great choice for that. On the other hand, if you don’t mind having a dated looking and bulkier receiver, and you really want to achieve maximum value and/or fidelity, then getting a cheaper alternative and investing the savings into better speakers (or keeping it, sure), is likely a better choice. See the links below for some alternative recommendations.

Get the Marantz NR1510 receiver on Amazon (affiliate link)