Skip to content
Bottom Line: pretty basic with minimal power and volume. The larger AV42 is overpriced, but the smaller AV32 is a little more competitive. Still, for the money, better alternatives exist. See the link at the end for such recommendations. 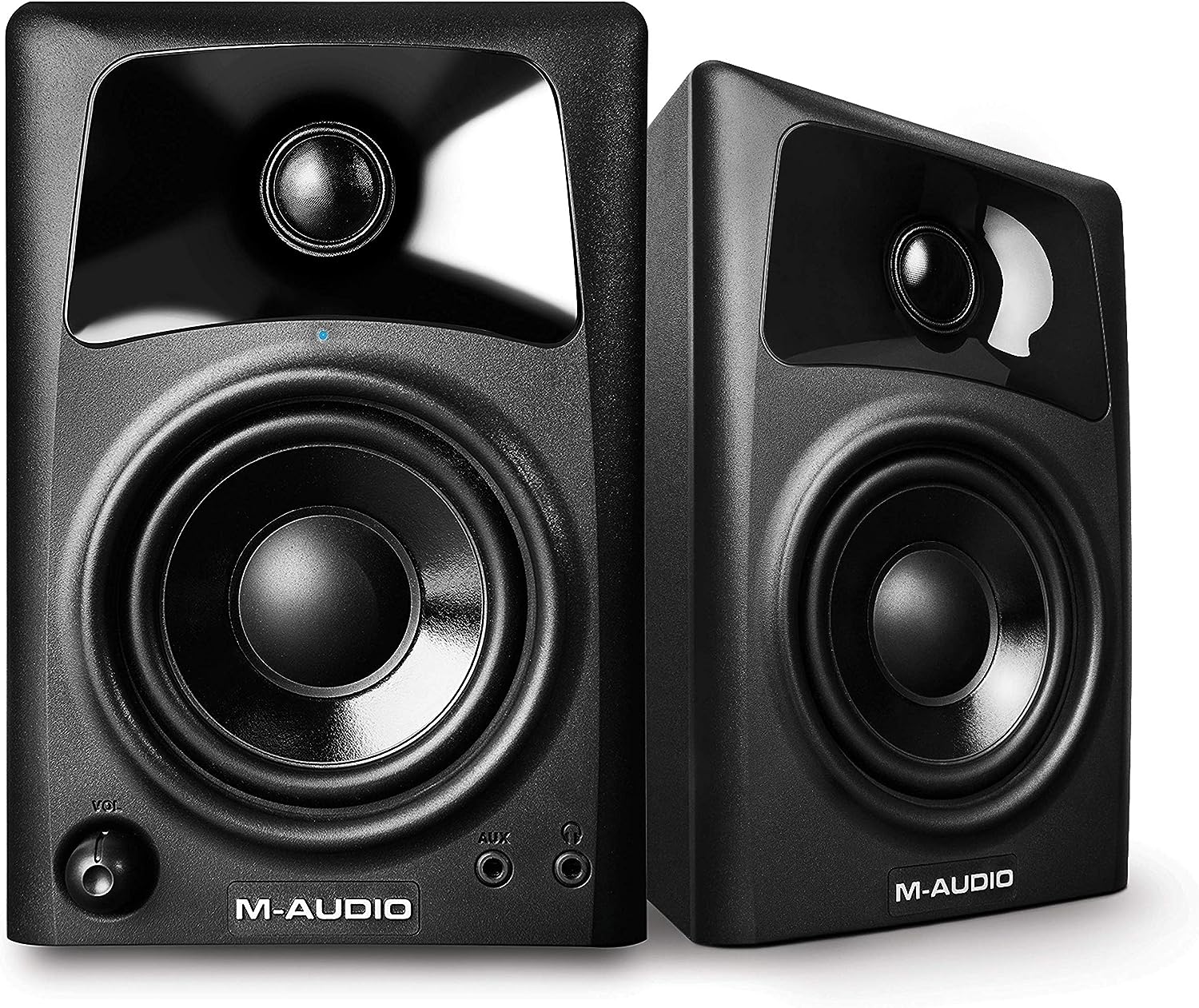 M-Audio is a company that makes a variety of audio equipment in addition to a lineup of powered speakers. We actually hadn’t heard of them until doing this review, but the AV 32 and 42s are quite popular sellers among budget-tier powered speakers, which is what prompted us to give them a look.

The two speakers have different sized woofers, and slightly different power specs, but otherwise are the same design. They’re powered speakers, meaning the amplifier is built in and you don’t need a receiver. They can plug right into the wall with an included adapter and they’re ready to go. You can connect a source via Aux or RCA – pretty basic. There’s also a headphone jack in the front. Connection cables other than the power supply don’t appear to come included which is a bit disappointing because they often are included with other powered speakers.

The power specs are pretty minimal, especially so the smaller 3 inch driver AV32. These are definitely intended to be near-field desktop speakers and wouldn’t suffice in a full sized home theater setting. The response range is also pretty minimal with the floor being fairly high, so the bass on these won’t be stellar. This is usually a concession that smaller 2-way bookshelf speakers have to make – a smaller midrange driver simply can’t reproduce full bass like a dedicated subwoofer can while concurrently being mainly responsible for the majority midrange. Some nicer powered speakers actually have an output to connect an external subwoofer, but the AV32/42s do not.

The tweeter is a 1 inch silk dome and the woofer is a polypropylene blend – pretty standard for a basic budget speaker design. The cabinet is a pretty boilerplate grain vinyl MDF, with distinct plastic baffles. The tweeter is loaded into a sort of depressed horn looking… thing, we guess is best to call it, though something that shallow is probably not going to influence the sound in any significant way. How do they look overall? Eh, pretty par for the course for basic budget speakers, maybe a bit cartoonish in the front. These speakers unfortunately don’t come with covers which is disappointing since covers almost always do come included with speakers.

M-Audio speakers come with a 1 year warranty which is pretty bare minimum, but you’re lucky to get more than 2 years of coverage on a powered speaker from a non elite product/brand.

The original MSRP of the larger AV42 was way too high, and we’d give them a hard pass for that reason, and even now with a discount we’d still say you can get better value elsewhere. The original MSRP of the smaller AV32 for whatever reason is a mere half of that, though, and has also been subsequently slashed, so its a little more competitive than its larger brother. Yet still, better alternatives exist that, for the same amount of money, have better specs, features, and design. If you listen to the AV32s and really like how they sound and don’t mind the lack of bass (some people honestly don’t need it), then go ahead, but for now we’d say go with a competitor. See the links below for such alternative recommendations – we’ve got referrals to our current favorite powered speakers there.