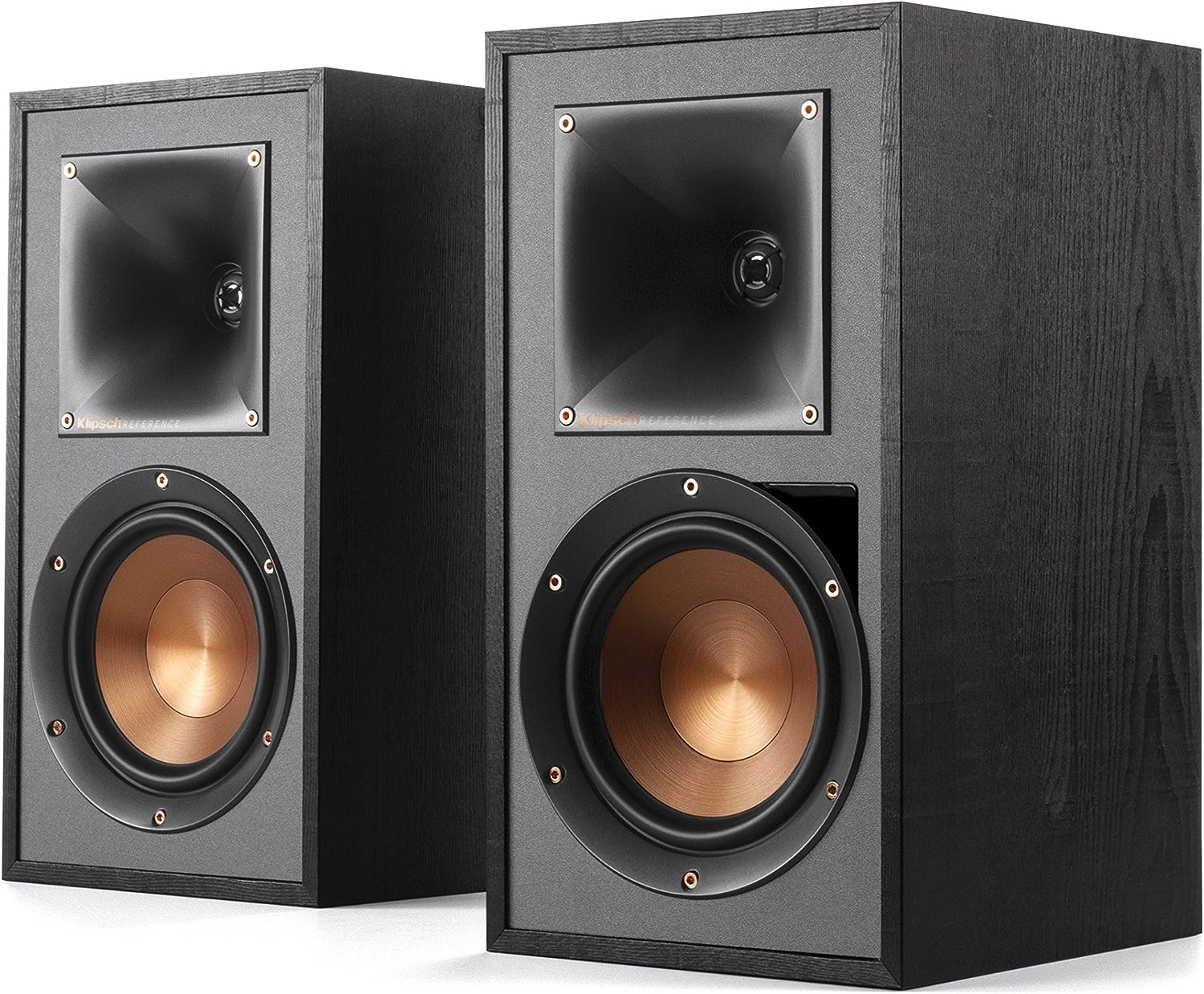 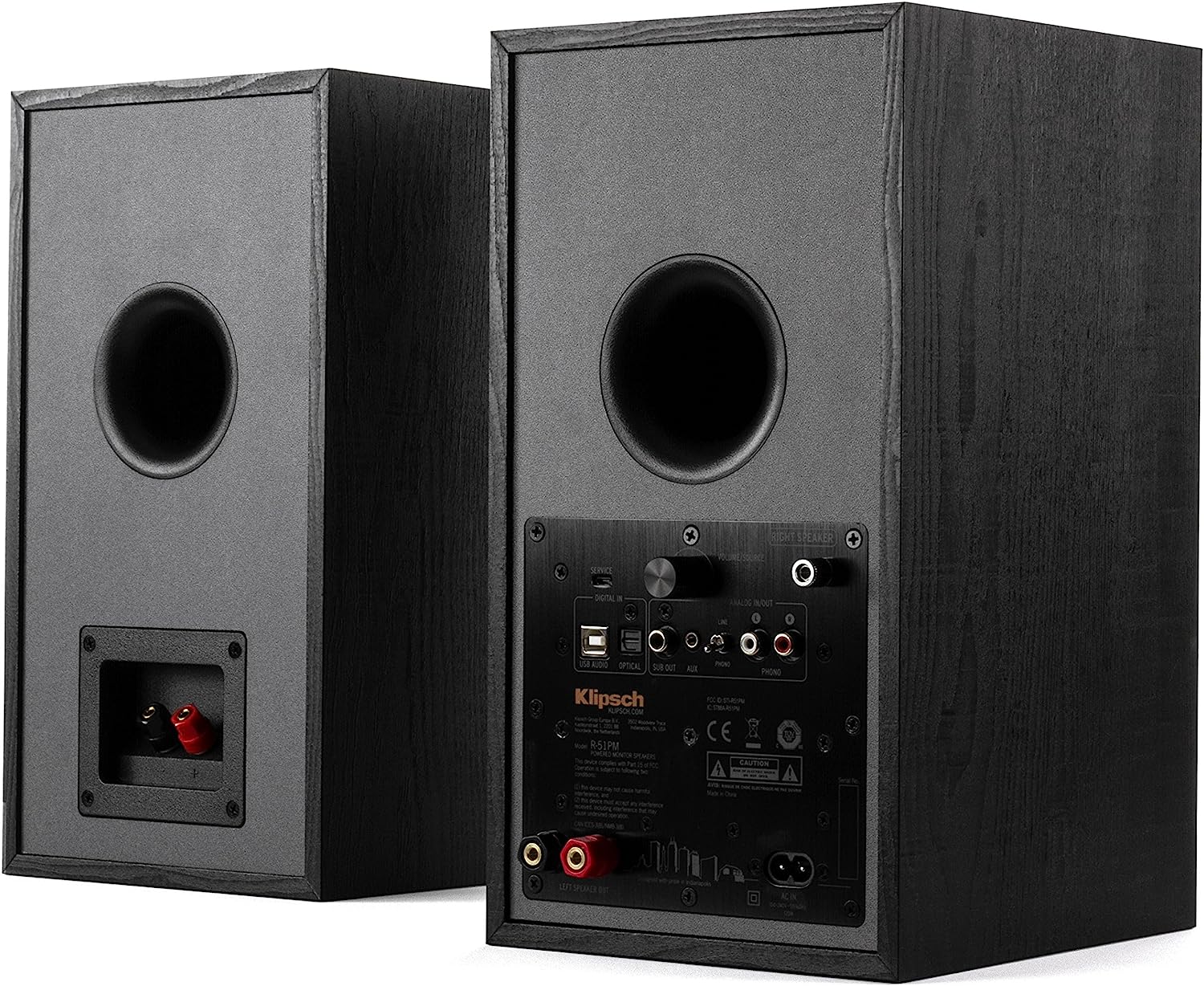 Like their predecessors, the R-41PM and R-51PM vary slightly in size and power/volume capacity, but otherwise have the same design, hence another joint review herein.

The now legacy R-15M is, as of the time of this writing, still one of our favorite budget bookshelf speaker for the sheer power and volume it brings for such a modest price, and unsurprisingly we like its powered version quite a lot as well. So how does this new version improve upon it?

Well, the most obvious change is the aesthetic design upgrade. While the cabinet looks to be the same ~1/2 inch MDF with a mock vinyl wood finish, the baffle is now a separate piece, slightly embedded in a way that keeps the bezel exposed if the speaker is covered, and it looks really good. The tweeter and woofer are now separately loaded into the baffle, when before they were kind of housed in the same plastic piece.

Klipsch uses its same proprietary horn loaded tweeter that they love to put in their speakers, though now it looks a little bigger and with more dispersion. The tweeter itself is a one inch aluminum dome.

The woofer is the same spun copper blend, Klipsch’s signature color, though the unit seems to be simplified – the surround is smaller and flush right to the basket, which is slightly embedded and secured with six visible similarly copper colored screws. The LED power light on the parent speaker has also been moved to the top right.

Aesthetically it has a more “dulled down” look, is the best way we can describe it, that seems to be trending with bookshelf speakers. We think it’s an improvement upon the older version, though functionally it probably doesn’t do anything significantly different.

So lets talk about specs now. We’re not sure if the internal amplifier has been changed, but the power handling on each has marginally increased. Klipsch now actually specifies the continuous and peak power handling of these speakers, which you almost never see with powered speakers. They also quote a max volume of around 105 and 108 dB respectively, presumably at 1 meter or so.

But don’t listen to 100+ dB noise at close range! That’s a handy way to eventually damage your hearing, if you don’t immediately wince away in discomfort to begin with. It’s a useful spec anyhow though because it tells us that either of these speakers can get plenty loud to fill just about any room that isn’t exceedingly large. This is great because most powered speakers can’t do that and are more intended for desktop range listening.

Klipsch doesn’t specify the response range of these speakers, which is very odd, especially since they did with the prior models these have replaced. Though we can’t know for sure, it’s probably safe to assume the range has slightly improved with each. That said, a response floor of ~80 and ~60 Hz respectively is decent but not stellar. Though this is going to always be a limitation of smaller 2-way bookshelf speakers. 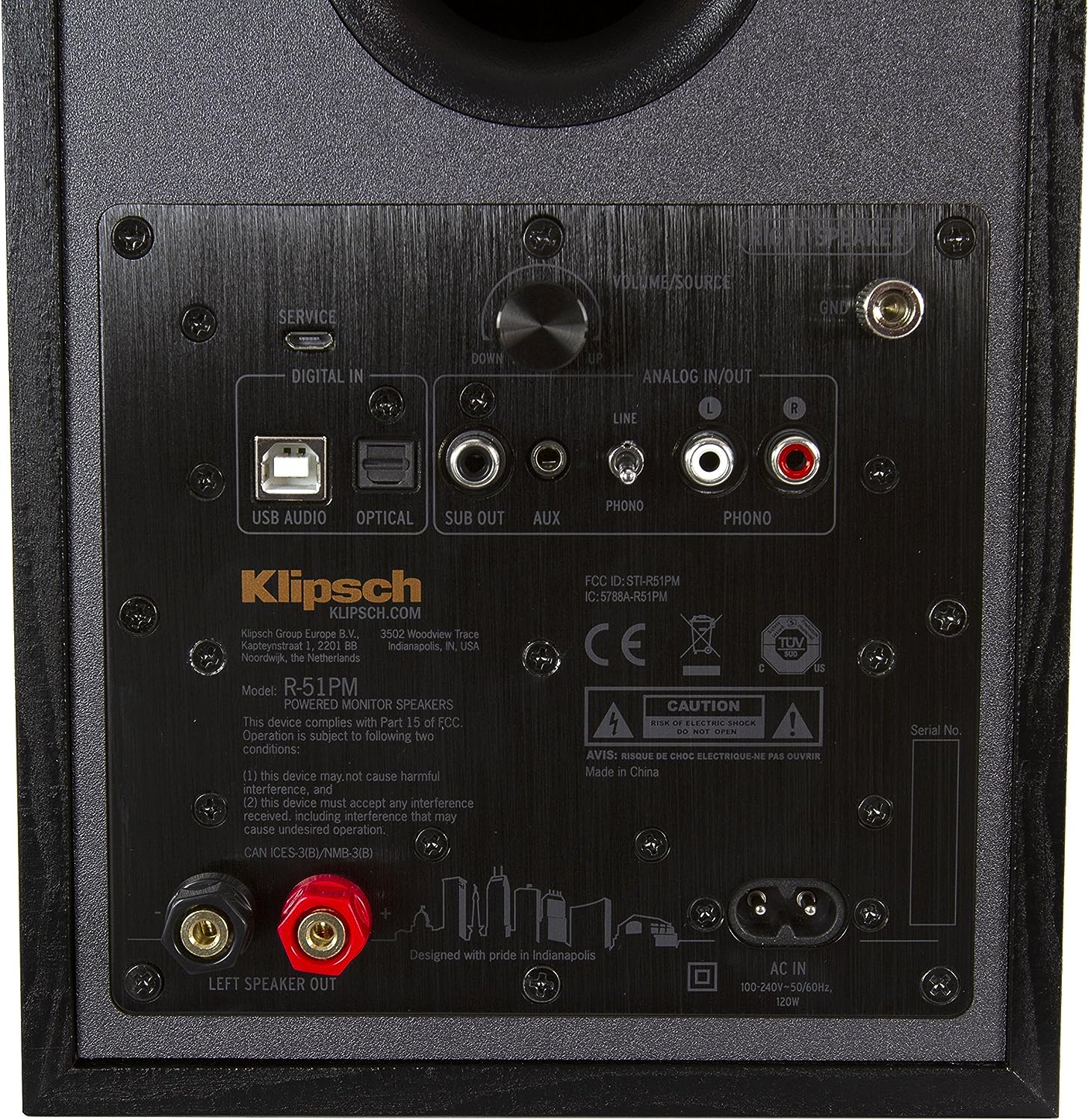 The good news is that these speakers have just about every connection type anyone could want, including a line out for a subwoofer, which is something you don’t see on too many powered speakers. They also come included with an A/B USB cable as well as a little remote control. They’re also Bluetooth compatible if you want to control them directly with your device.

One thing that’s nice is that both these speakers are quite compact and light, especially so for a powered bookshelf speaker. The port on the back will need room to breath, but beyond that these will be relatively easy to place as opposed to something like the behemoth JBL 3-Series.

The one thing that’s disappointing is the mere 1 year warranty on the electronics, which is about the same you normally get with really cheap powered speakers at a bare minimum.

That said, the now legacy version of each (reviewed here), which are still not that old are significantly cheaper and basically as good, albeit a little more dated looking. Brand new speakers are rarely the best deal, whereas recently replaced speakers often become significantly discounted. The older version will probably eventually become no longer available, so now might actually be a good time to get a pair.

See our current picks for the overall bestbudget bookshelf speakers