Skip to content
Bottom Line: unique slick design. Coaxial driver is unusual but has an advantage of consistent sound regardless of location, but that might not matter if you’re just listening from the same spot at your desk. Power specs are good but less than popular competitors. Response floor is limited, separate subwoofer likely required for optimal sound. Normally overpriced, but often steeply discounted. Pretty bare minimum warranty for the price-tier. 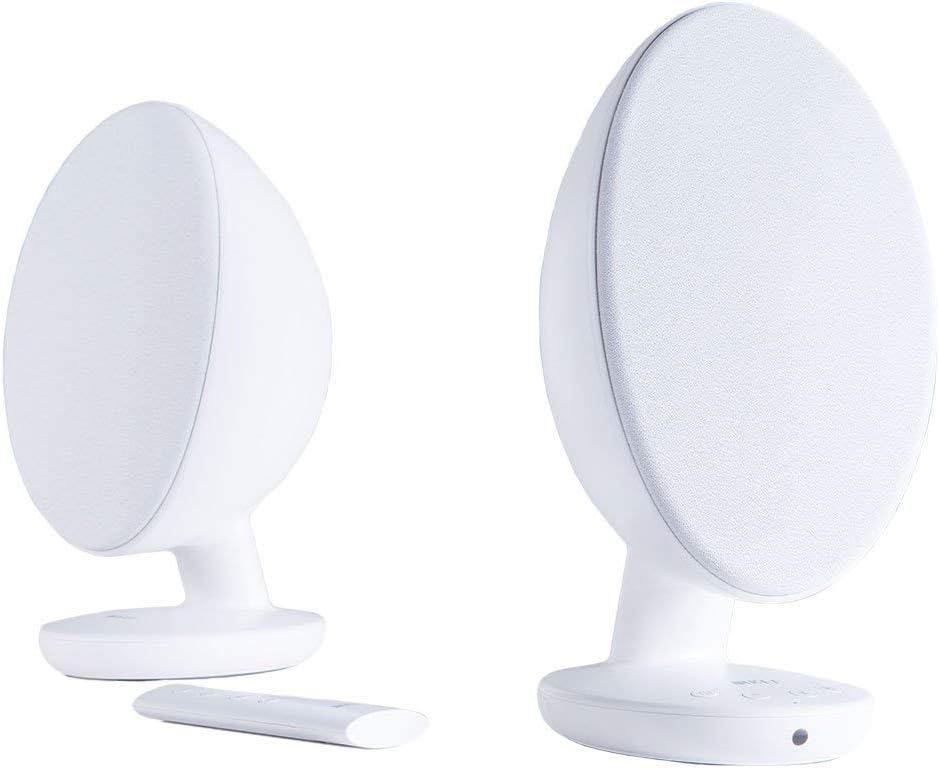 KEF has definitely gained a reputation for producing some of the best sounding and most popular bookshelf speakers in the MidFi category, despite them being on the expensive side (though they do seem to intermittently get steep discounts for whatever reason). The Egg speakers are a slick looking Bluetooth desktop speaker that are seemingly a revamp of their now discontinued E301 and E305 lineups that have the same stand-propped egg shaped look.KEF’s well known trademark are their iconic Uni-Q coaxial drivers that they’ve been using in pretty much all of their speakers for the last 25 years.

Most bookshelf speakers have a component design, meaning the tweeter and woofer are separate. But the coaxial Uni-Q driver instead has the tweeter built into the woofer so they share the same center. The main advantage of this design choice is that it saves space, so you mostly see coaxial drivers on things like car speakers or marine speakers, but the touted additional advantage is that you get a very even sound throughout the room since the distance from the drivers, which originate at the same spot, thus can’t differentiate. While most two way speakers have a sweet spot, the Egg and other KEF speakers sound consistent regardless of location. The other small indirect advantage of saved space is that these relatively small speakers can fit a front firing port in the cabinet where the tweeter would usually go.

The result is a single 4 inch driver that can achieve a pretty impressive range on its own. The 3/4 in embedded tweeter can get unusually high on its own, which actually helps the main woofer focus more on the mids and lows. The response floor is not great at 80 Hz, and there will probably be some drop off even above that, but this is a normal limitation of small two way bookshelf speakers. The obvious solution is that the Egg does have a line-out to add a subwoofer, which a lot of powered desktop speakers don’t have. Generally its better for a smaller two way bookshelf speaker to not poorly “try” to get low bass and just allow for a separate subwoofer to handle it, so that it can do its primary job of focusing on the mids and highs.

Power wise they’re plenty loud enough for close-mid range, but wont get as loud as some of the popular powered studio monitors that get an SPL of up to ~110 dB.

Aesthetically they look pretty cool, kind of retro futureish for those who like that sort of thing. It’s always nice to see an available deviation from a boilerplate black MDF box. They come in standard black and white as well in addition to the primary blue. The speakers are rather tall, mainly due to the built in stands, but the good news there is that you don’t need to worry about your own stands or separation yourself. The resting surface area remains small, and each speaker is a mere ~5 lbs, and they don’t have back firing ports that need to breathe, so desktop placement is about as easy as it gets here. 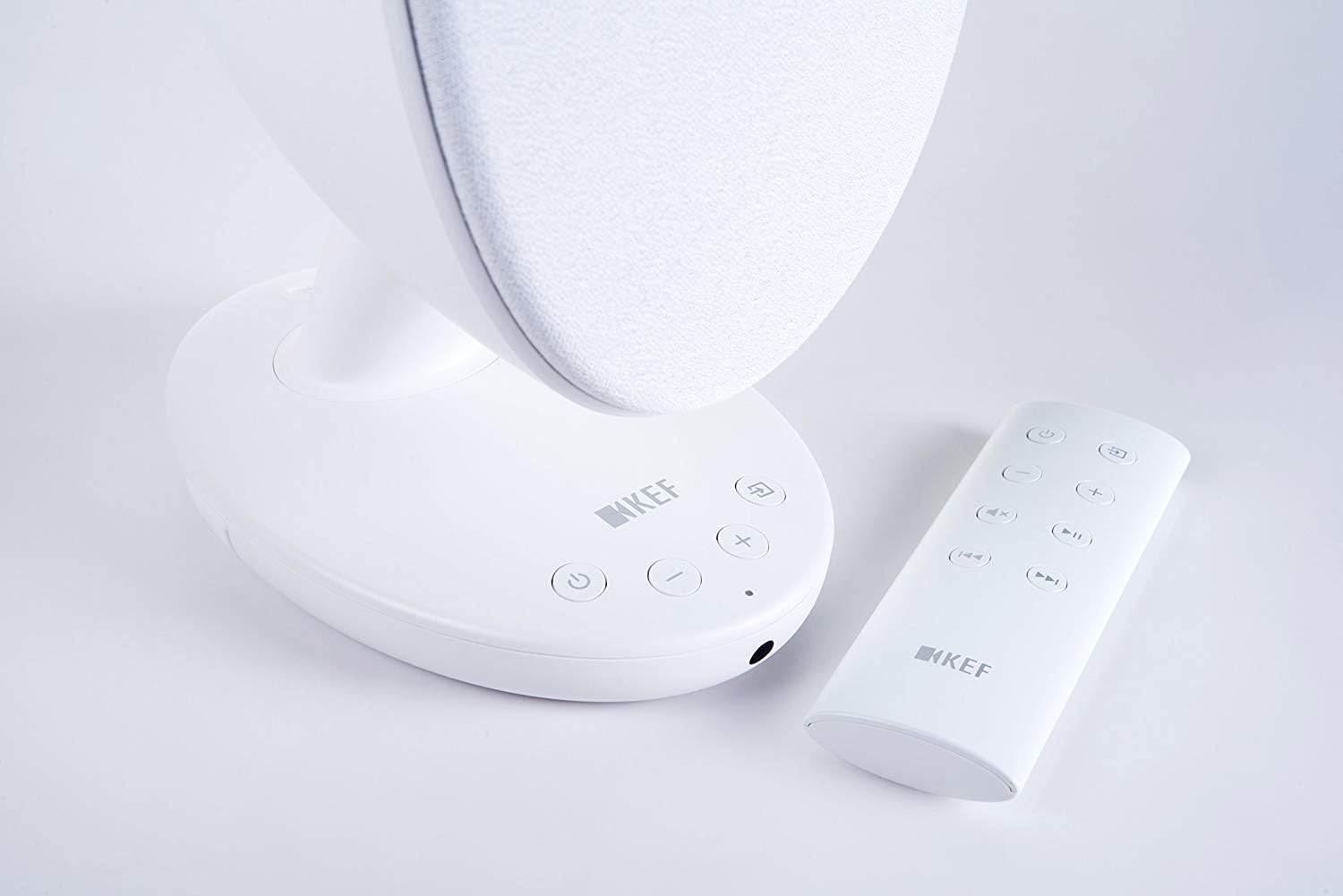 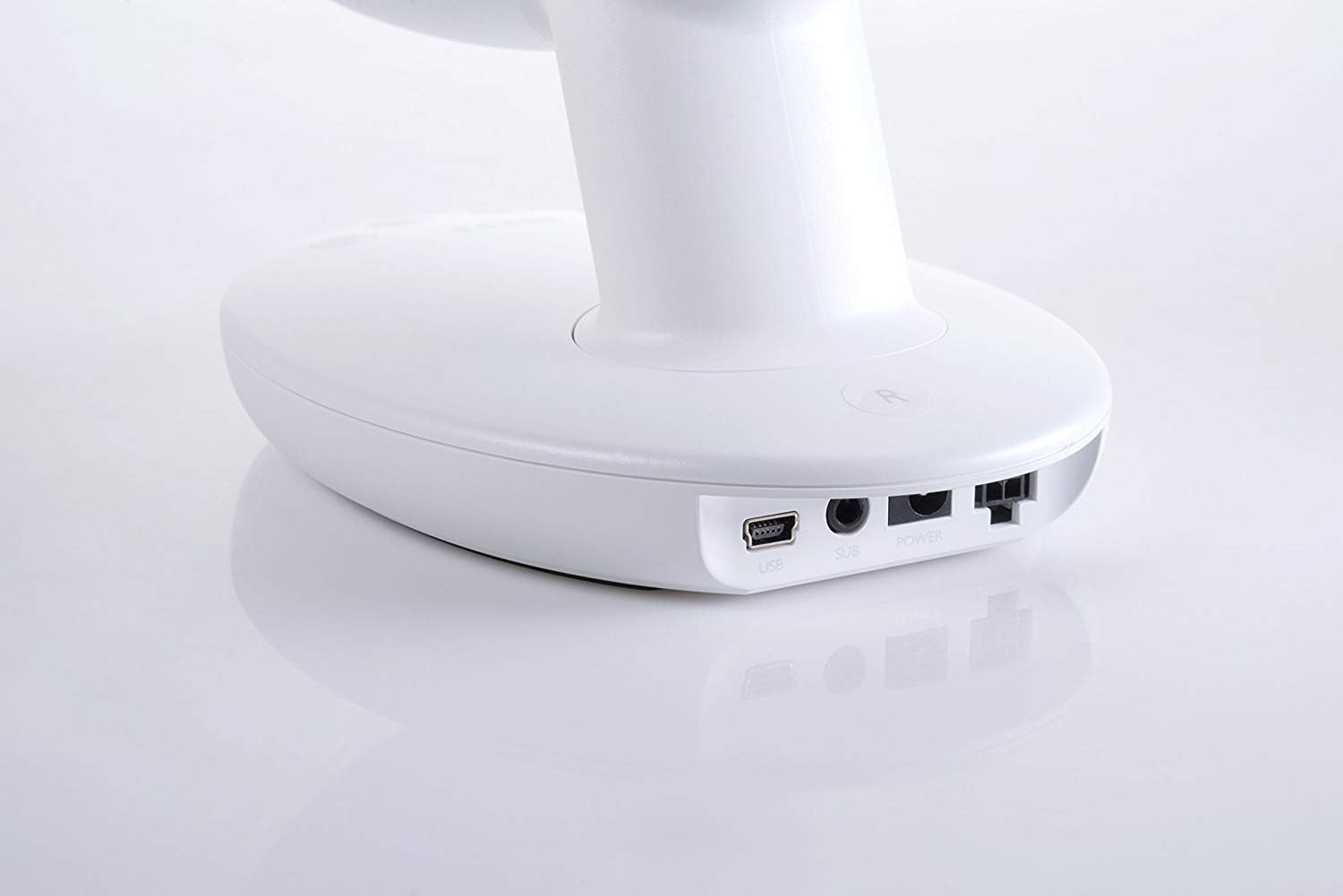 Inputs are pretty basic but cover what anyone should need: Mini USB and TOS to connect to any standard computer/device, the subwoofer output, a 3.5mm jack, and of course the power adapter input. And of course they’re also Bluetooth compatible which is nice. headphone jacks that aren’t in the front are kind of annoying.

KEF only offers 1 year of warranty on powered speaker components, which is pretty bare minimum, where a lot of competitors offer 2-3 years of coverage.

KEF speakers run expensive, and that’s our main contention with them, and the MSRP of a pair of Eggs is/was frankly too much – you can get a lot more value with the same amount of money elsewhere. However, as we said initially, for whatever reason, KEF speakers see steep intermittent discounts that we’ve seen come close to half off in some cases. If you can get them at that kind of discount? They’re definitely a strong competitor among desktop speakers, albeit still on the expensive side though.

The coaxial driver has always been a questionable design choice for bookshelf speakers for a variety of reasons, but it does have potential advantages that we think particularly shine for the kind of product that the Egg is. That said, eliminating a sweet spot isn’t that much of a actual issue for desktop speakers where it’s safe to assume that a person will be listening them in a single, predictable spot (the desk chair). But maybe you like being able to get up and meander and not noticing a difference in sound.

We will say that better specs and performance is available among competing powered speakers for the same price, especially if you don’t actually mind big monitors sitting on your desk.