Skip to content
Bottom Line: nice looking speakers with solid specs and features that remain relatively compact. The value-tier of powered bookshelf speakers is now extremely competitive, but the YU6 is certainly a contender, albeit not the best deal that we’ve seen. 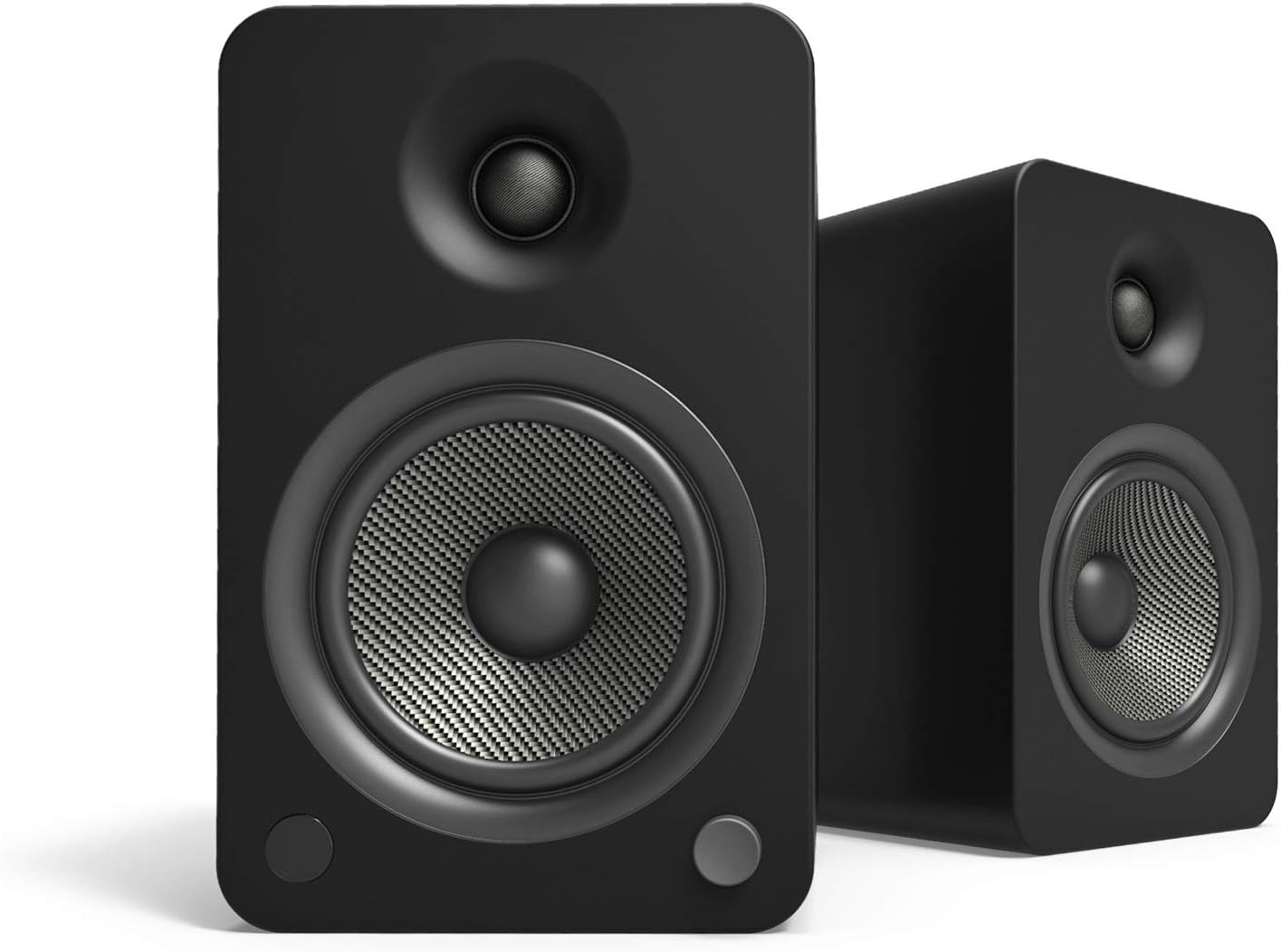 Kanto Audio is a relatively newer company (circa 2007) that makes a smaller selection of speakers. Powered bookshelfs are their wheelhouse, and the YU6 is their largest, most powerful version, and probably the company’s most popular product overall. The biggest distinction between it and Kanto’s smaller powered speakers is the large rear firing port which is much more on par with a traditional full sized bookshelf speaker design.

The advantage of powered speakers is that they don’t need an amp or receiver – you can just plug them right into the wall and your device and they’re ready to go out of the box.

They don’t disclose the cabinet material but it looks like fairly standard MDF with a matte finish, a singular piece all around, save for the holes where the drivers are housed.

The tweeter is a 1 inch silk soft dome with a slight waveguide, and the woofer is a 5.25 inch kevlar fiber woven cone with a rubber dust cap. Fairly standard driver materials, and they look quite nice on this speaker.

Speaking of looks, The YU6 comes in seven different colors which is a nice distinction amongst most other speakers that usually come in black or white, or maybe wood if you’re lucky.

the choice palate, from their product page

The parent speaker has a class D amp that gives each speaker 50/100 W of continuous/peak power, which is quite good for a powered desktop speaker that stays relatively compact like the YU6 does. These will get plenty loud enough to fill just about any non-large room.

The response range is also good for the kind and size of drivers this speaker has. They don’t specify a dB differential, so we suspect there will be some drop off before the quoted response floor, but a two way bookshelf speaker with a 5.25 in driver that can get to 50 Hz is about as good as it gets. The YU6 does have a dedicated sub-out line, which is a nice feature that some powered speakers don’t have. You can easily plug a subwoofer right in to get full bass, though these speakers are decent enough that they might sound fine without one. 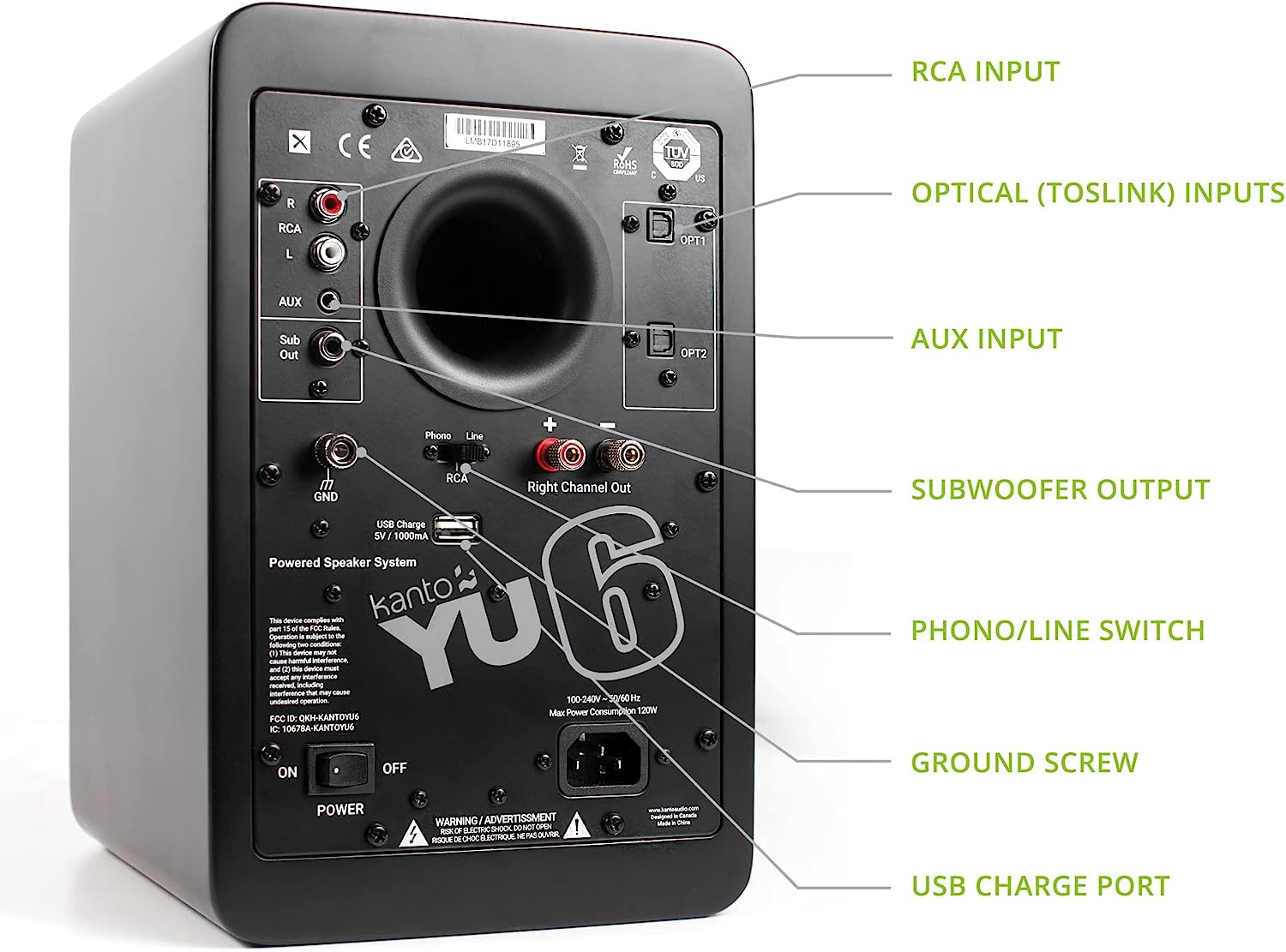 Expanding to the inputs in general, the YU6 has pretty much everything you’ll need – optical, RCA, and Bluetooth for wireless source control. Fancier studio monitors might have more specialty inputs or EQ knobs, but those are more geared towards professional who are doing actual studio work. All essential connection cables come included which is nice. You also get a neat little remote which does have some balancing options. One small annoyance is that the 3.5mm jack is in the back, so if you want to use headphones through the speakers it might be kind of cumbersome.

Size and weight wise these run pretty middle of the road for desktop speakers. They’re a bit tall, but the resting surface area isn’t too large. They will need room in the back for the ports to breathe, something which isn’t the case for the smaller and ultra compact YU2s.

There’s now a lot of competition in the category of product this speaker is in, but the YU6s are certainly a strong contender, and while they’re a bit expensive, they do tend to run cheaper than the longtime popular Audioengine A5+ powered speakers. They also look nice and come in so many different colors which is cool.

Some people won’t need so much power for near-field listening, so it might make sense to save money on a cheaper alternative that can get loud enough. Other options also exist that bring a little more pure value and performance for the price, especially if you don’t mind speakers that are bulky or not so slick looking. Check out the links below for some such alternative recommendations.

Get the Kanto U6 bookshelf speakers on Amazon (affiliate link)