Skip to content
Bottom Line: a very solid set of speakers and a subwoofer that’s ready to plug in and go out of the box, for a very competitive price. This is the best 2.1 budget computer speaker system that we’ve seen thus far. 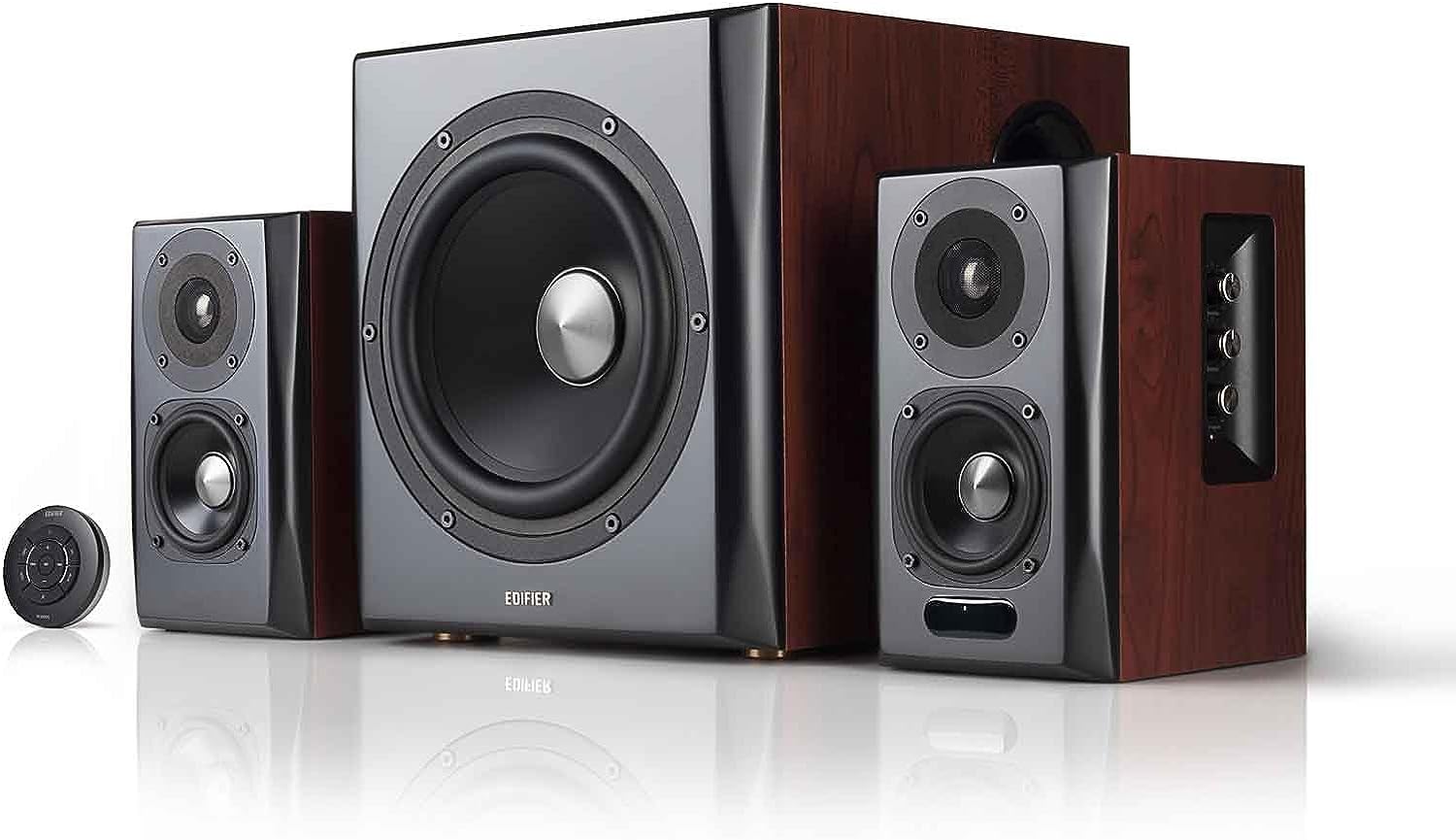 Edifier has really come onto the scene in the last few years with an array of high quality budget speakers, many of which have become popular best sellers as well as some of our top overall picks. The S350DB is a competitively priced, all inclusive 2.1 (2 bookshelf satellites and a subwoofer) computer speaker system, though there’s no reason this wouldn’t also work with a TV or any other device with the same compatible inputs.

The major advantage of powered speakers is that you don’t need a receiver or other ancillary components such as speaker wire to connect everything – instead you can just plug them into the wall and your device, and they’re ready to go out of the box.

The general disadvantage of powered speakers, however, is that they’ve traditionally had inferior specs and less overall value. But that gap has definitely shrunk in recent years – companies are producing more and better powered speakers that have become strong competitors with traditional passive counterparts. Edifier is definitely one of these companies, and it shows with the S350DB system: it brings solid specs, design, and features; all for a very competitive price and with the convenience of being plug-in-and-play. 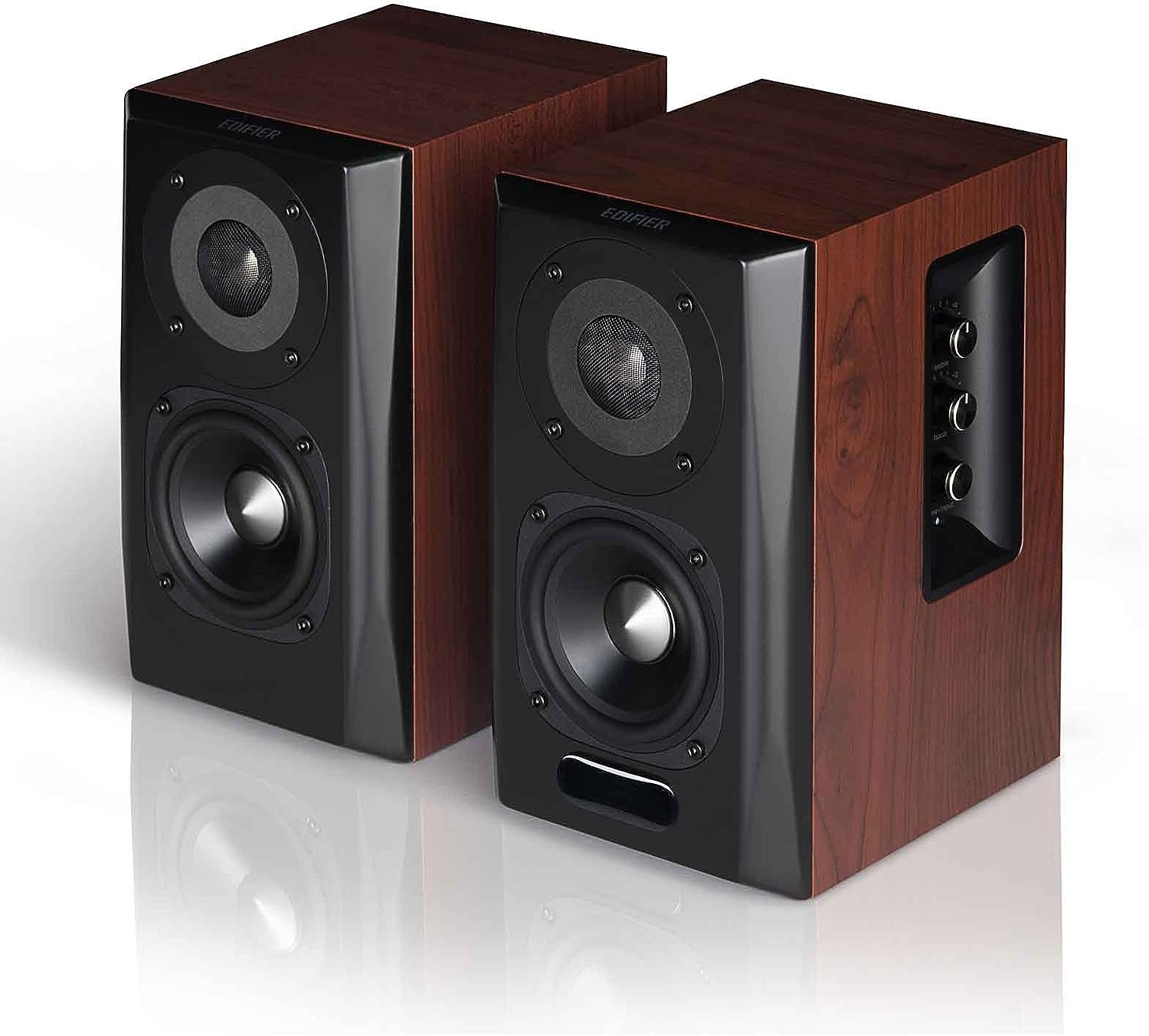 The satellite speaker is a standard looking two way bookshelf. The tweeter is a 3/4 inch titanium dome with it’s own protective grill. Edifier doesn’t provide specifics on the mid or subwoofer materials, which appear to be the same except in size. Most likely the same standard polymer blend that their other budget woofers use, though interestingly with a phase plug to help with cone breakup.

The satellites also have three EQ knobs right on the side to adjust the overall volume, treble, or bass – a neat feature on many of Edifier’s powered speakers.

The satellite driver are small, but the advantage of being a dependent part of a 2.1 system is that they can really be optimized for the mids and highs (160 Hz+) since a second crossover will defer the lows to the subwoofer. The subwoofer itself is also a fully sized 8 inch driver that has a 40 Hz floor, so all in all we have a cumulative response range that is quite excellent for the modest overall price of the system.

The speakers also manage to look quite nice, and definitely more expensive than they actually are. Making nice looking budget speakers above and beyond the boiler plate black MDF box that you normally see in this price range is definitely a distinct strong suit of Edifier’s. The cabinet structure of the satellites and subwoofer is basically the same – fairly standard looking MDF with a nice cherry mock wood finish and a separate geometric baffle. The chrome tweeter and phase caps is a little jarring, but other than that we think these look great.

The amplification is built into the subwoofer, so the satellite speakers can’t function independently. Cumulatively the quoted power handling specs (35 W x 2 satellites; 70 W subwoofer) is quite solid, though not massive. Keep in mind these are dubbed computer speakers, so the presumed intent will be near/mid-field listening, and these have plenty enough power and volume for that purpose. We wouldn’t recommend these in a full sized home theater set up – they might not get loud enough, and also the included cables might not actually be long enough for such a set up. It could certainly be possible to finagle the wiring with extra extensions of sorts, but it’d be inconvenient, and you’d of course have to pay for the extra ancillaries.

Speaking of wires and connections, the S350DB is all inclusive as we said, which means it does indeed come with all the minimally necessary connection cables out of the box: the power cable, an RCA to 3.5mm, a standard aux, and a male-male cable to connect the satellites. You can also see a nifty wireless control that also comes included. And speaking of wireless, these are also Bluetooth compatible.

This is a solid quality 2.1 system with design, features, and specs that you wouldn’t normally see for such a modest price. We feel like they could easily sell this bundle for significantly more. If you’re looking to augment the sound of your computer or other near/mid-field device with something above and beyond cheap desktop speakers, the S350DB system is definitely a worthwhile option. Edifier’s two year warranty on its powered speakers is also some of the best coverage around – normally your lucky to get up to one year of coverage with similar competitors.

The only real downside of this kind of system is that you can’t individually upgrade components like you could with a traditional 2.1 system, so if you wanted a bigger subwoofer at some point, for example, you’d have to scrap the entire system. You’re also kind of forced into a near-field set up with the short-ish included cables.

If you’re looking for something more compact, or maybe you feel like you don’t need a full sized subwoofer, you might consider checking out some of Edifier’s other powered speakers. We’ve reviewed many of them – here’s a link to them all. You can also check out some of our overall favorites via the links below.

Get the S350DB 2.1 computer speaker system on Amazon (affiliate link)