Skip to content
Bottom Line: solid specs and a beautiful design with an actual wood cabinet. Wattage might be overkill for near field listening and thus not worth paying for. No way to add a subwoofer either, and 2-way bookshelf speakers will always have limited bass. Better alternatives exist for now, see the end for some such recommendations. 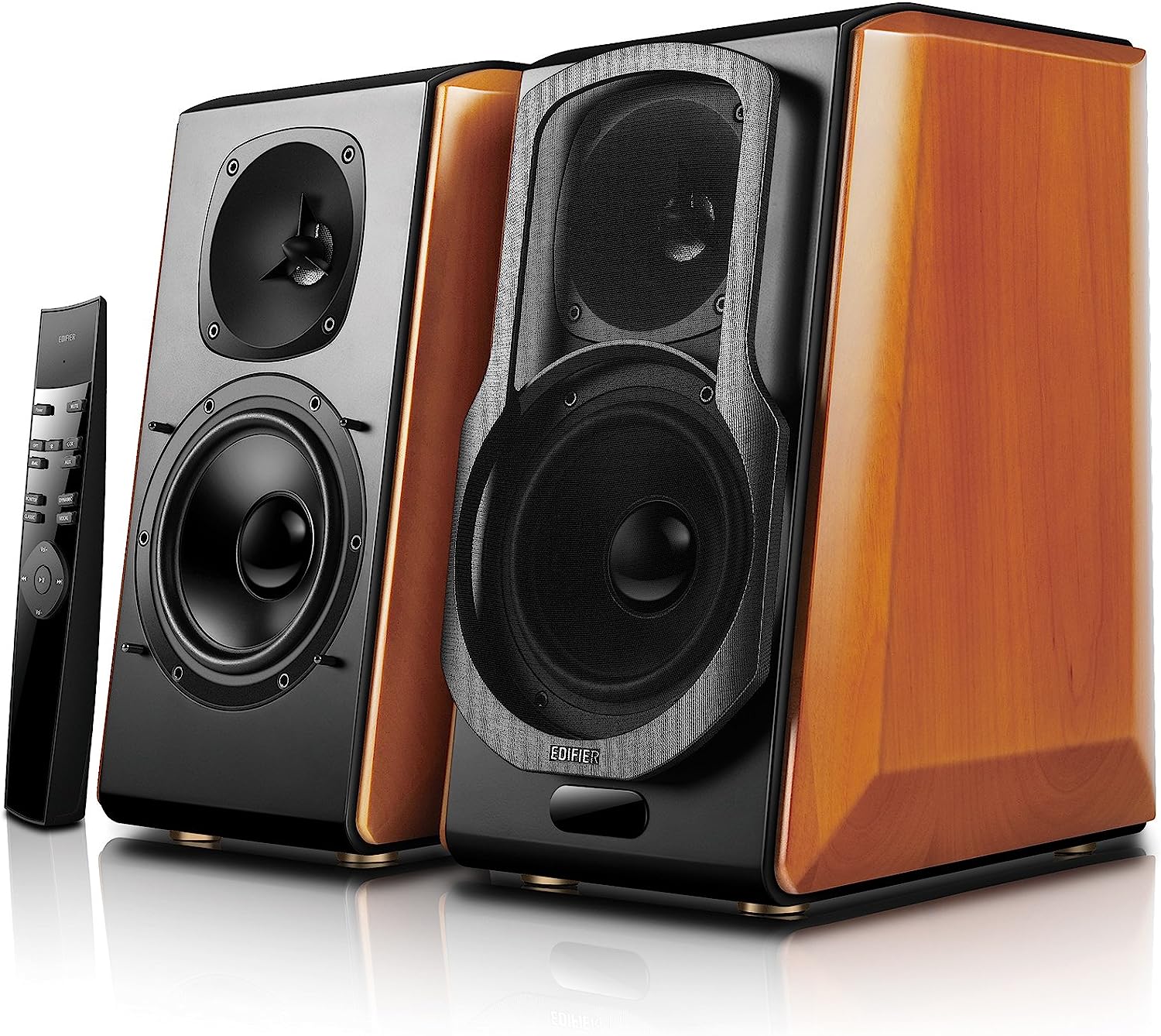 Edifier makes a wide variety of popular powered bookshelf speakers, and the S2000Pro is their premium pair of such, featuring the best specs and design of their lineup.

Powered speakers have built in amplifiers, meaning there’s no need for a receiver or speaker wire, just plug them in and they’re ready to go.

The S2000Pro, like the rest of Edifier’s powered speakers, are ready to go out of the box. All ancillary connection cables come included. In addition to Bluetooth all the standard expected inputs are there: RCA, Aux, Optical, Coaxial. There are also two EQ knobs to adjust the tweeter and woofer sensitivity which is neat.

The power rating is quite impressive for a powered speaker, and while most desktop speaker wouldn’t suffice in a full sized room, these definitely could. 2-way speakers will always have limited bass, though the 48 Hz response floor on these is pretty decent. Edifier doesn’t specify a response curve/variance, which means there’s a non-insignificant chance the volume will drop off before that point. 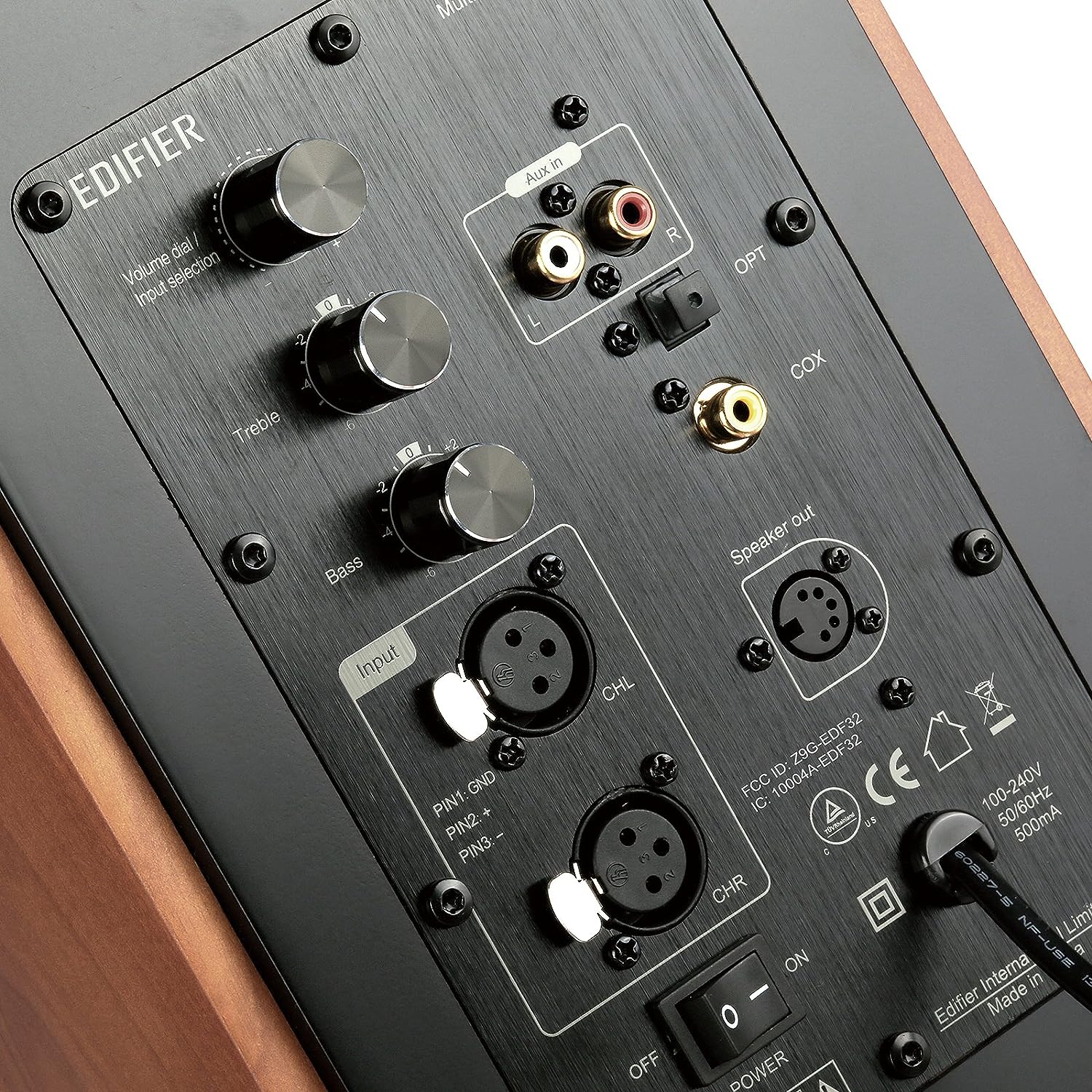 A limitation of the S2000Pro and most similar powered speakers is the inability to add an external subwoofer, which is a standard feature for any traditional passive system using a receiver. It’s kind of an issue when you have a more expensive pair of speakers aimed to be premium, so to speak. Edifier does actually produce a different pair of powered desktop speakers that do have a subwoofer output though: the 1850DB (reviewed here), and it’s the only such speaker we’ve seen to date. It’s also cheaper, not to mention.

Edifier bookshelf speakers all look great, and these look particularly fantastic. The cabinet is actual wood, with birch side panels, as opposed to much more commonly used MDF “mock” wood. While wood isn’t necessarily superior, cabinet design is a critical part of any speaker – the idea is to minimize the amount of resonance as possible so as to not cause interference with “rogue” sound. The upward angle is a nice touch too, positioning the sweet spot right at where the head of a sitting person would presumably reside.

The specs are good, the built is good, and they certainly look great. But are they worth their MSRP? We’d say no, at least for now. The major problem with so called HiFi powered desktop speakers is that they’ll always be limited without a subwoofer, and there’s no easy way to add one on. 2-way bookshelf speakers just aren’t optimally designed to reproduce bass.

The other issue is 60+ watts of power is often going to be overkill for near/mid-field speakers. When you consider that there are powered bookshelfs for a fraction of the price without that power that you might not need in the first place, we’re inclined to just say save your money. In fact, Edifier makes one of our favorite pairs of such, the R1280T (reviewed here)

Or, with roughly the same amount of money you could buy a really nice pair of passive speakers and a subwoofer, and maybe even a receiver if you’re really thrifty enough. A traditional 2.1 set up, though the starting price is usually higher, will give you the best value and performance for your dollar. Check out the links below for some such recommendations.

Get the S2000 powered bookshelf speakers on Amazon (affiliate link)