Skip to content
Bottom Line: a solid option that can drive more power per channel than most of the competition, ideal for those who want to use more demanding speakers on a budget, input options leave something to be desired.

Denon generally makes higher end and more expensive a/v equipment, but the AVR-S540BT released in 2018 is surprisingly inexpensive for what it offers and is a real contender in the budget category.

The front interface panel is a bit cluttered but easy enough to navigate. A dial and four quick-set buttons for the source is a little redundant but whatever. Bass/Treble tone control buttons and a usb slot on the front are nice features which you don’t tend to see on budget receivers.

The back panel is simple and nicely labeled so it shouldn’t be hard to understand and set up. One downside is that the speaker terminals are spring clips instead of binding posts. That won’t impact the overall sound quality but they can be a pain to set up and sometimes lose the connection. Two RCA pairs and one coax is limited and might not accommodate your set up, competitors generally have at least 3-4 pairs. Two pre sub-out inputs is a nice feature at this price-point, but not many people will need more than one subwoofer.

The AVR-S540BT has great power and accuracy specs, with a harmonic distortion rating that’s as low as we’ve seen while still managing to drive 70 W per channel. Pretty impressive for the price-point. You’ll be able to easily drive pretty much any set of non-professional speakers you might get.

The unit comes with one of their universal remotes for those who prefer that, but Bluetooth is built in as well (hence the appending BT), which is good because if you used an Bluetooth RCA adapter you’d only have one open pair left.

Size and weight wise it’s pretty in the middle and shouldn’t be too hard to accommodate. Just remember to give it at least a few inches of room to breathe. 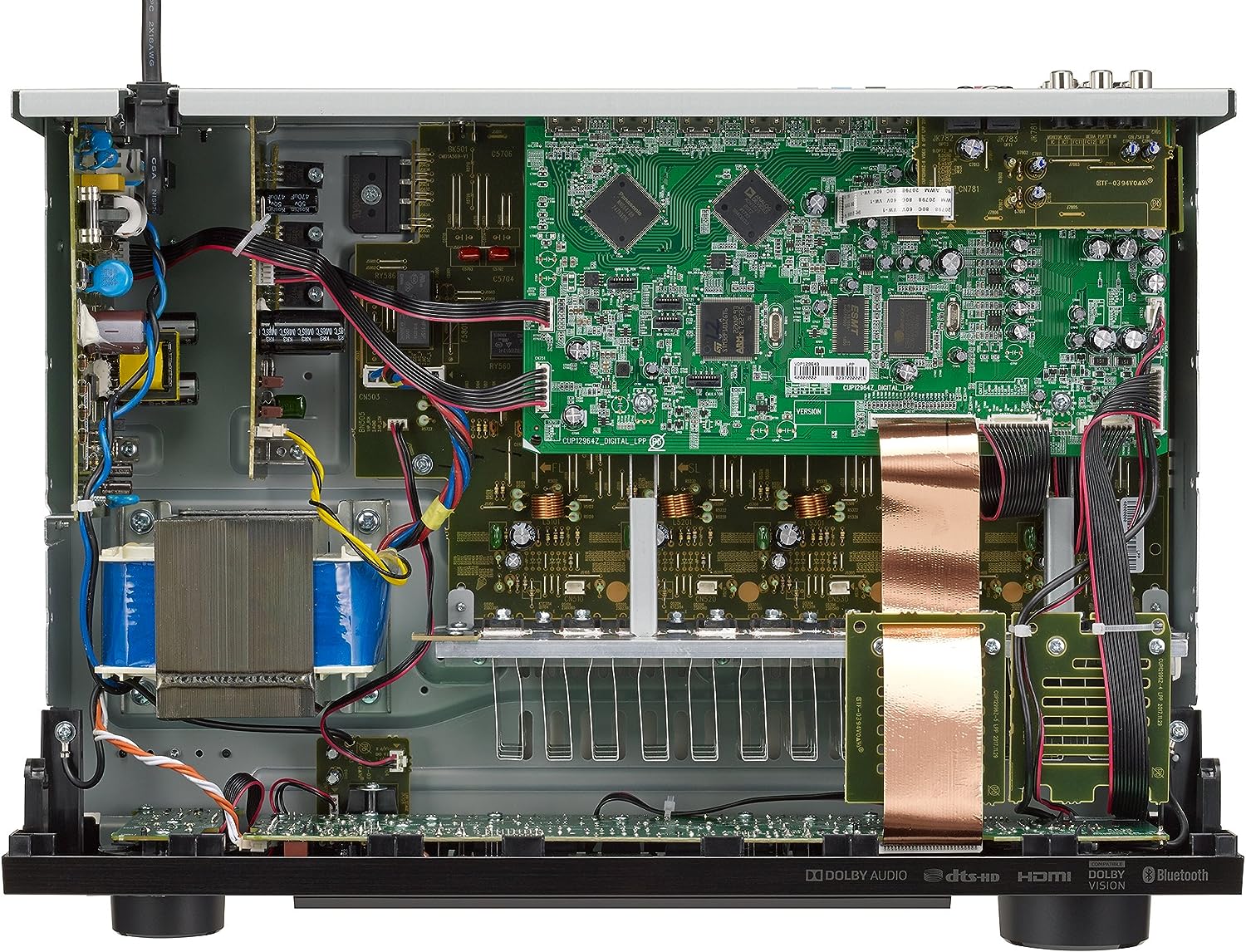 components are nice and spaced out, click to see zoomable image on Amazon

Denon equipment usually runs expensive, and many people still swear by it, but the AVR-S540BT is a seeming exception – it’s very competitively priced budget receiver that offers a lot. Probably because it’s an older model and likely discounted from the MSRP. Across the standard range it can drive significantly more power per channel than most of the competition that we’ve seen, which means it can accommodate more demanding speakers. Spring clips and only two RCA pairs is a bit of a drag but by no means a deal breaker. Availability seems to be limited and it’s likely to get discontinued sooner than later.

Get the AVR-S540BT on Amazon

See our current picks for the overall best budget receivers